The amendment is a major blow to Theresa May’s Brexit plans and would compel ministers to report back to Parliament with their progress on securing a divorce deal by January 21 next year.

If no agreement with the European Union has been struck, the Government would need to outline what it intends to do next then put its plan to a vote in the Commons.

Peers voted 354 to 235 in favour of the amendment to the EU Withdrawal Bill, which was proposed by Viscount Hailsham.

The Conservative peer dubbed his amendment “Grieve two” after leading Tory rebel Dominic Grieve, who has campaigned for MPs to have more involvement over the Brexit process.

Today’s vote is the latest in a series of amendments to the Government’s flagship Brexit legislation, and the second such “meaningful vote” change approved in the Lords.

The latest debate in the Lords will now launch a fresh match of parliamentary “ping pong” as changes to the flagship legislation are sent back to the Commons – which the prime minister has warned would tie her hands in negotiations with Brussels.

And as peers discuss Brexit, MPs is to debate the future of the unelected second chamber after an online petition calling for the abolition of the Lords gathered nearly 170,000 signatures.

Tory rebel MPs want a ‘meaningful vote’ on the Brexit deal, giving Parliament the power to send Theresa May back to the negotiation table if they don’t like the agreement.

This would stop the Government leaving Europe with no deal, but Brexiteers say this weakens Britain’s hand in negotiations.

Tensions reached boiling point over the weekend when Brexit Tory ringleader Dominic Grieve warned Tory rebel MPs could lead the “collapse” of the Government if they disagree with the final outcome of withdrawal talks. 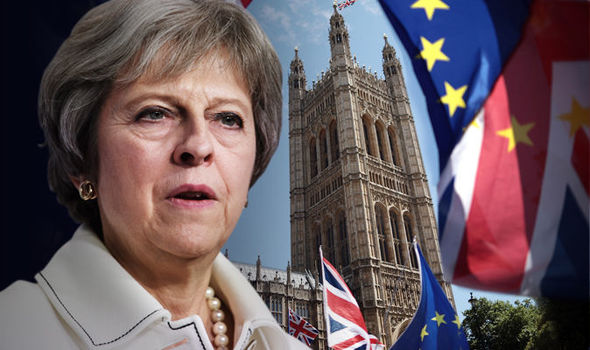 Brexit news live: Theresa May is set for another showdown with MPs

Mr Grieve insisted rebels would only accept a “meaningful vote” and not the “slavery clause” Mrs May had offered in last minute concessions last week.

He said MPs had the right to a proper say on Brexit.

Theresa May faced off a potential rebellion by pro-Remain Tory MPs minutes before a crunch vote on the EU Withdrawal Bill last Tuesday.

She appeared to accept an amendment tabled by Mr Grieve which demanded measures be put in place to give Parliament a meaningful vote if negotiations with the EU break down.

However, furious rebels claimed the Government had altered the wording of the amendment at the last minute to deny MPs any chance of blocking a “no deal” Brexit.

Mrs May has denied she had broken any promises made to Remain rebels after they reacted with fury last week over a late alteration to the EU Withdrawal Bill.

Speaking on the Andrew Marr show over the weekend, the Prime Minister insisted she would not allow Parliament to block the Government from negotiating the best possible deal for Britain.

But the Government is heading for a defeat this afternoon, which will spark another showdown in the Commons on Wednesday, when Lord Hailsham, former Tory Cabinet Minister Douglas Hogg, re-tables Mr Grieve’s original amendment giving parliament the power to take control of the Brexit process if MPs do not accept the final deal.

Under Government plans, if MPs reject the agreement reached by Mrs May with Brussels, or if no deal has been obtained by January 21, Parliament will be offered the opportunity only to vote on a “neutral motion” stating that it has considered a minister’s statement on the issue.

Crucially, the motion will be unamendable, meaning that MPs cannot insert a requirement for Mrs May to go back to the negotiating table, extend the Brexit transition or revoke the UK’s withdrawal under Article 50.

Expected Lords amendments to the landmark Brexit legislation are set to return to the Commons on Wednesday.

6.20pm: Peers approve an amendment to grant MPs a “meaningful vote” in the event of a Brexit no deal.

Viscount Hailsham’s amendment is easily passed with a majority of 119.

If approved in the Commons, it would force the Government to allow MPs a vote on whether to proceed with Brexit if ministers are unable to secure a deal with Brussels.

5.20pm: Lord True has challenged Viscount Halisham by proposing his own amendment to the Brexit bill.

Conservative Lord True said the Government had “made a serious attempt” at taking on board the views of those who disagreed with the EU Withdrawal Bill.

He warned peers they could potentially collapse the Government if continue along the path of challenging the Commons.

His own amendment disagrees with that proposed by Viscount Halisham, which called for Parliament to be given a “meaningful vote” on the final Brexit deal. 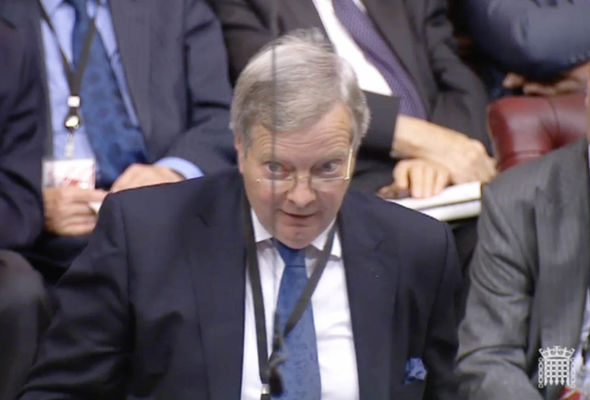 4.55pm: Viscount Hailsham has declared his support for an amendment to the Brexit bill which would allow MPs a ‘meaningful vote’ on the final divorce deal.

The Tory peer introduced a new change to the EU Withdrawal Bill, which he dubbed “Grieve Two”.

The original amendment by Dominic Grieve was never voted on, Viscount Hailsham said.

Pro-EU Mr Grieve and a group of Tory rebels had threatened to vote against the Government if their demands to give Parliament a say on the Brexit deal were not met.

The former Attorney General met privately with Theresa May last week ahead of a crunch vote in the Commons, where he said he thought he had secured a promise from the Prime Minister which addressed his concerns.

But the final wording of the amendment published by the Government offered no ‘meaningful vote’.

Viscount Hailsham said: “The Government’s amendment not only fails to deliver the promised meaningful vote. That would be an act of omission and bad enough.

“But this is far worse. The Government is seeking to make the promised meaningful vote impossible and that is an act of commission contrary to what ministers have promised.”

4.20: The House of Lords has pledged to continue pushing for a continuation of EU environmental standards after Brexit.

Peers had previously defeated the Government when they voted to amend its landmark Brexit bill to compel ministers to protect air, soil and water quality.

The House of Lords warned the Government’s proposed environmental watchdog would lack power.

Debating the Brexit bill again today, peers said they would accept changes made by the Commons.

But they vowed to “push the Government further” when environmental legislation came before Parliament later in the year. 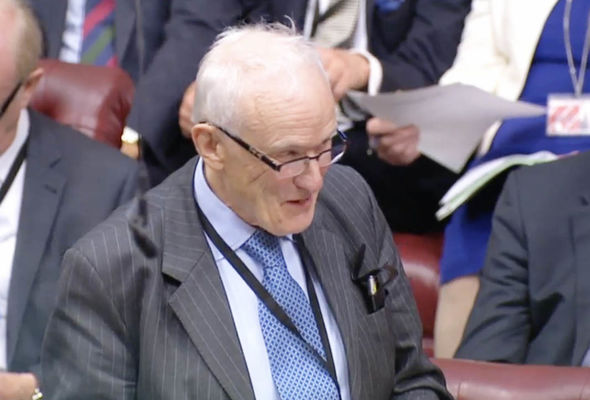 3.40pm: During the debate of the EU Withdrawal Bill in the Lords, Labour’s Lord Grocott began his comments by saying he wanted to be home in time to watch England kick off their World Cup campaign against Tunisia this evening.

He said: “I will speak briefly because like everyone else I want to watch a football game this evening.”

The former chief whip’s comments were met with muted laughter from some peers, and a cry of “speak for yourself!” from another.

Lord Grocott went on to urge his colleagues to respect the result of the EU referendum and send the Brexit bill back to MPs to approve.

He said: “We all know that having the referendum and having the votes of both houses on article 50 as our guide, we absolutely have to pass this bill because otherwise there will be a cliff edge.

“This is an exceptional bill, it has exceptional scrutiny, we have asked the Commons to think again, they have thought again and decided that they preferred most of the bill in the way it was sent to us.” 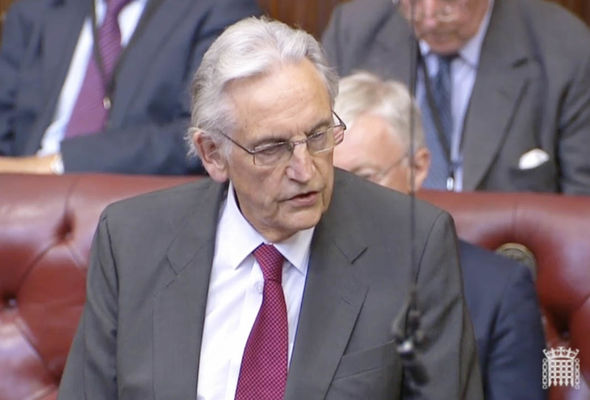 11am: Viscount Hailsham, the former Conservative cabinet minister Douglas Hogg, had already tabled Dominic Grieve’s original compromise amendment which he attempted, but failed, to get debated in the Commons last week.

That Grieve amendment had the controversial “clause C” which Brexiters and ministers objected to; it said that if there is no prospect of a Brexit deal by February 15, then within five days the government must consult parliament “and must follow any direction in relation to negotiations.”

10.30am: Dominic Grieve said Theresa May was offering a “slavery clause” to rebel MPs, who would only accept a ‘meaningful vote’. His comments yesterday caused fury among Tories.

He told BBC Radio 4’s The Westminster Hour: “I don’t want to fetter my Prime Minister while she’s negotiating the best deal for Britain.

“And part of that has got to be where, if (EU negotiator) Michel Barnier tries to give us a very bad deal, that she can turn around and say ‘no, I’d rather not do that’.”

10am:  Frank Field, the former Labour minister, has been allocated Commons time to introduce a bill which would scrap the House of Lords and replace it with a hybrid senate of experts and elected representatives from across the country.

Mr Field says an attempt by peers to “defy” the Commons by reinstating a series of amendments rejected by MPs, would amount to an “act of insurrection”.

The MP, who supported the pro-Brexit campaign, said he would be seeking the Government’s support for the move “in readiness” for peers preventing “good passage of the Bill implementing the referendum decision.”

1.58pm: Theresa May said Parliament must not be able to “overturn the will of the British people”.

The Prime Minister said she had been listening to the concerns of critics but the legislation must not restrict her freedom in talks with Brussels.

She said: “As we keep faith with people who voted to leave the European Union, and many of those who didn’t but are now saying ‘let’s just get on with it’, we need to make sure we are putting this legislation into place.

“But as we do that, of course we have been listening to concerns about the role of Parliament, but we need to make sure that Parliament can’t tie the Government’s hands in negotiation and can’t overturn the will of the British people.”

12.15pm: A Westminster Hall debate on the abolition of the House of Lords led by Brexit-backing Tory MP Paul Scully gets underway at 4pm.

It comes as a new report by the Electoral Reform Society highlights the lack of diversity in the upper chamber, pointing out nearly 40 percent of its members are former politicians or advisers, and the vast majority come from London or the South East.