In an opening salvo ahead of the next round of face-to-face talks over the UK’s departure from the EU, the Tory Cabinet minister hit out at European Commission negotiators for trying to put conditions on future military and counter-terrorism cooperation.

“Any move by others to place conditions on our offer will only serve to put the safety of everybody’s citizens at risk,” he said.

He also savaged Brussels for trying to freeze the UK out of the pan-European Galileo satellite navigation system.

“Put simply, the Commission’s position seems to be shooting itself in the foot just to prove the gun works,” the EU Exit Secretary said. 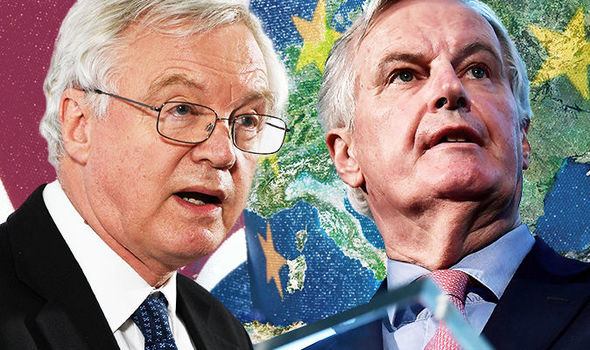 He complained that UK firms were facing discrimination and being blocked from contributing to the design and manufacture of the satellite system.

With the talks on a future trade deal currently deadlocked, the Cabinet minister is braced for the most intensive sessions so far.

And he raised the stakes in the negotiations yesterday by venting frustration at the EU’s refusal to accept Britain’s unconditional offer of a continuing close security partnership once the country has quit the bloc.

“As the threats we face continue to evolve so must our collaboration,” the EU Exit Secretary said.

“Because we must work together — and quickly — if we want to avoid any gap in our operational capability, a gap that could be exploited, putting people in harm’s way.”

He added: “The first duty of government is to keep its citizens safe.

“And it’s the pursuit of that safety that made Britain make that unconditional offer to the European Union.

“Any move by others to place conditions on our offer will only serve to put the safety of everybody’s citizens at risk.

“Because when terrorists set off bombs or fire guns — be in it on the streets of Paris, or London, or Manchester or Brussels — they don’t check the passports of their victims first.”

Mr Davis was scathing about warning from Brussels that a UK outside the EU could be excluded from the Galileo satellite network that British scientific expertise and investment had helped to build.

He said: “Because Galileo is so important, UK industry and military experts have been instrumental in its design.

“We have spent hundreds of millions of pounds on the project, and thousands of hours of work has been dedicated to making sure the system is secure.

“But now, the Commission are suggesting that by being involved, the United Kingdom poses a risk to the security interests of the European Union.

“British companies are being discriminated against, blocked from applying for contracts to design and manufacture parts of the new system.

“And this is happening, despite the fact that excluding UK industry would delay the project by up to three years — and cost the programme an extra billion euros.”

Mr Davis also raised concerns about threats to freeze the UK out of the European Criminal Records Information System (ECRIS), which allows the sharing of tens of thousands of pieces of information about criminal convictions between EU nations every year.

“We are consistently one of the top three contributors and users of ECRIS.  Last year alone, we sent and received more than 600 requests and notifications a day,” the EU Exit Secretary said.

“If we were frozen out of ECRIS, neither the United Kingdom nor member states would be able to quickly obtain criminal records information from each other.

“Courts might no longer be able to take into account previous convictions when deciding on guilt, sentence or bail.

“And law enforcement agencies may no longer be able to protect the public when dangerous individuals move between the United Kingdom and the European Union.”

Mr Davis also feared the UK defence industry was facing discrimmination in the awarding of contracts from the new European Defence Fund.

“The UK and our industry are already making a meaningful contribution.

“But, the EU’s approach to the provisional regulation risks damaging potential cooperation in the longer term,” he said.

“On all of these, unhelpful precedents and assumptions on how third countries should cooperate with the EU is hindering projects that help the entire continent.

“Dogmatic responses based on what has happened before don’t help anyone.”

In a warning of retaliation, the senior Tory added: “And actually, when I hear that by going beyond precedent for the UK, agreements with other countries will have to be re-examined.”

Mr Davis said Britain could be “proud” of its role in defending peace and security on the continent and was determined to continue to do so.

“We’re proud of the role that we have played in making our continent safer. We have taken such actions because we are friends and allies of the European Union, and its member states. Europe’s security is our security,” he said.

“We want a comprehensive deep partnership with the European Union on a whole range of matters, that have an impact on our security.”

Ahead of next week’s talks, he urged the European Commission to accept Britain’s departure and recognise that Brexit did not mean the country was turning inward and away from Europe.

“I recognise that Brexit isn’t popular for many people in the EU.

“Going around Europe, it’s clear that people do not want us to leave. I understand that.

“But the British people made their decision — for reasons that I think are correct, decent, and in the long-term interests of our country.

“We will still be the open, tolerant, welcoming country we have always been,” he said.