Just last week, the father of seven and grandfather of two was shocked to discover there was a strong family link to getting prostate cancer if a relative has had the disease.

After becoming involved with the charity Prostate Cancer UK, Christopher, 77, discovered his three biological sons are two and a half times more likely to get prostate cancer.

Christopher’s father had prostate cancer when he died, which had made the actor also two and a half times more likely to get it.

The actor was also shocked to learn that his non-biological adopted son, who is black, is twice as likely to get prostate cancer because statistics show that one in four black men are at risk of getting it, compared to one in eight men generally. 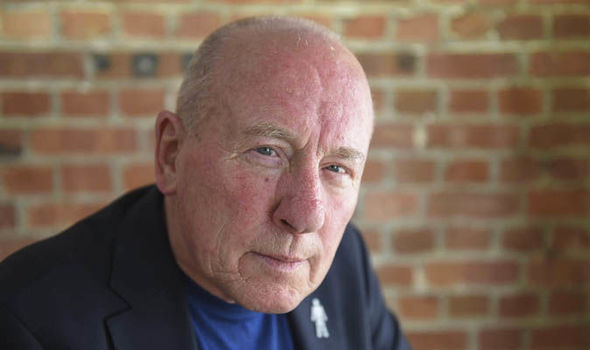 His grandson, Tyri, 21, is also at higher risk because he is black.

“I had prostate cancer but I’ve been clear for five years,” revealed Christopher. “There were only one or two people who knew.

“At the time I discovered that I had prostate cancer, it was not long after my first wife had died, so my children had lost their mum.

“I felt that to tell them that I had prostate cancer, while I knew that I had it and there was a threat of some sort, I felt that it would be wise not to make things worse for them.

Signs and symptoms of prostate cancer

“The death of their mum was a shock and my eldest daughter said at the funeral, ‘Please look after yourself, Dad’. I realised then that it was right not to tell them.

“But I did tell them when I was given the all-clear,” said Christopher, who joined BBC’s EastEnders last year, as Ted Murray.

Christopher was first diagnosed in 2008 and only told his children when he was finally given the all-clear in 2013.

“I am talking publicly now because it’s only literally in the last fortnight, after talking to the charity, that I discovered the heredity problem. It shocked me.

“I have four sons. Three of them are biologically mine and they are at significant risk, but not as high as my adopted son who is at an even higher risk. I have now urged them to get tested and they absolutely will. I will nag them about it.

“I want to give them the gift of knowledge on Father’s Day. Knowledge is power,” adds the actor, who played vet James Herriot in classic 1970s TV drama All Creatures Great And Small and a medic in daytime soap Doctors.

Christopher explains: “I don’t want to do newspaper interviews, particularly, but if this will do anything to raise awareness and make people think, ‘I’d better go and get a check’, then I will do it. There’s nothing romantic about my motives, except that I don’t want my kids or anyone else to get prostate cancer.” 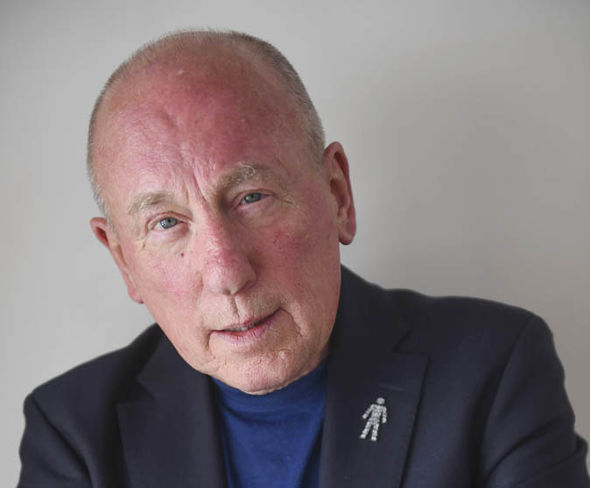 Christopher Timothy advises men to go and be checked

Christopher now lives with his second wife, Annie, 67, near Chichester, in West Sussex. They have one daughter, Grace, 34. He has three biological sons – with his first wife Susan Boys – Simon, 52, Nick, 51, and Robin, 49.

Christopher first discovered his symptoms in a bizarre twist of fate.

He recalls: “I was up North doing a play and after the show I was chatting with one of the other actors when he mentioned he had prostate cancer. I asked what the symptoms were and he said, ‘Blood in my urine’.

“When I went back to the digs I was staying at, I went for a pee – this was less than an hour after I had left the pub – and I looked in and thought, what’s that? I reached in and took out this sort of pellet and squeezed it, and it was blood. I thought, this is bizarre.

“I didn’t panic too much but I rang my GP the next day and he said, ‘Come in and see me. Just bear in mind that this needn’t be anything sinister’. So I didn’t worry too much.”

“The GP arranged an appointment with the specialist. My wife had said, ‘Let’s not hang around’, so we paid for that consultation.” 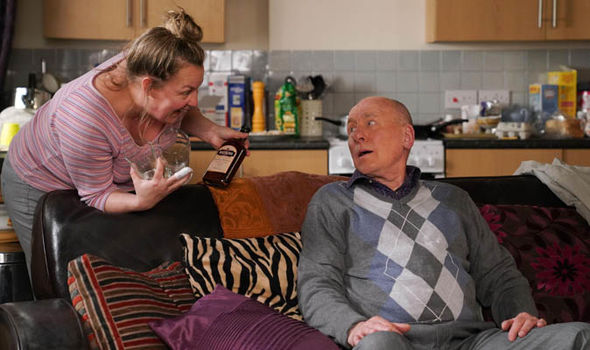 Christopher was referred for a rectal exam, urine flow test, and a biopsy.

He explains: “The test was very undignified and painless, but I was quite nervous about it. “Twenty hours later we went back and he came out of his office and looked at me and his face bore the expression of, ‘I’ve got bad news’.

“I had just finished playing a doctor in Doctors and I had had to tell somebody that they had cancer. In that moment I thought, ‘He’s doing what I did!’

“He told me that they had found cancerous cells, but not a lot. I thought, ‘Oh s***’, because it’s cancer, isn’t it. I now understand that Annie’s recollections of those first few meetings with the consultant are quite different to mine.

“She says that on several occasions I just zoned out when the information was being imparted. I suppose I was frightened.

“I had to keep getting the information from Annie that I had been given face to face by the consultant. A lot of it had gone over my head. My wife is unbelievably supportive.

“He gave us treatment alternatives but it was Annie who suggested waiting and seeing because she had done a lot of online research about it. It’s called active surveillance and I decided I’d quite like to do that. Everything was quite low and it had been found early enough and at the moment it wasn’t life threatening in any way. 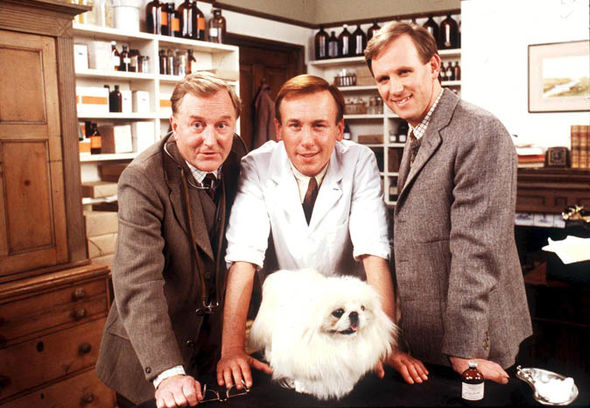 “I had a blood test every three months for three or four years. Towards the end, the PSA began increasing. Eventually the consultant said, ‘I think it’s time you got this cured’. He didn’t say ‘treated’, he said ‘cured’, which gave me great hope and great confidence.

“For several weeks I began having hormone treatment, there were no symptoms of that except I remember being in the kitchen one day and going, ‘Woah, I think I’m having a hot flush’. My wife said, ‘Welcome to my world!’

“Then I had radiotherapy. The first couple of days Annie came with me and then I said, ‘Look, this is no big deal, it’s not painful, it doesn’t seem to be debilitating in any way, I’ll drive myself’. So I did.”

“It was five days a week for eight weeks and I began to quite enjoy it. Mainly because of the nurses and the people I was with.

“We’d end up being a group of up to 12 men sitting around in a circle and very quickly we began talking and sharing. I looked forward to seeing them. We had fascinating conversations about everything, not just about having cancer.

“It was fascinating to see how everybody deals with it differently. With some men, their reaction to the whole process was that they were angry. Of course, they were really frightened, and I suspect that’s probably the bottom line.

“I don’t remember any of them actually telling me they were scared, it was just blatantly obvious.

“I don’t ever remember feeling hopeless and that life is awful, not ever, and that’s down mostly to Annie.

“About two months after the radiotherapy I was given the all-clear. There was a bit of trepidation when I went for that appointment because it was possible that it wasn’t all clear.

“The main thing that had been going through my mind during that whole time was, ‘With any luck, I’m going to get better’.

“When I told my children about everything, they were just very pleased and relieved that I had been given the all clear.

“One of the reasons I didn’t tell people I had cancer was I thought it might affect work. I know how high insurance is for employing actors of my age, it’s horrendous. So, it’s a miracle that I get employed at all.”

He adds: “I am aware that it is not impossible that it could come back, but I seriously don’t think about that.” 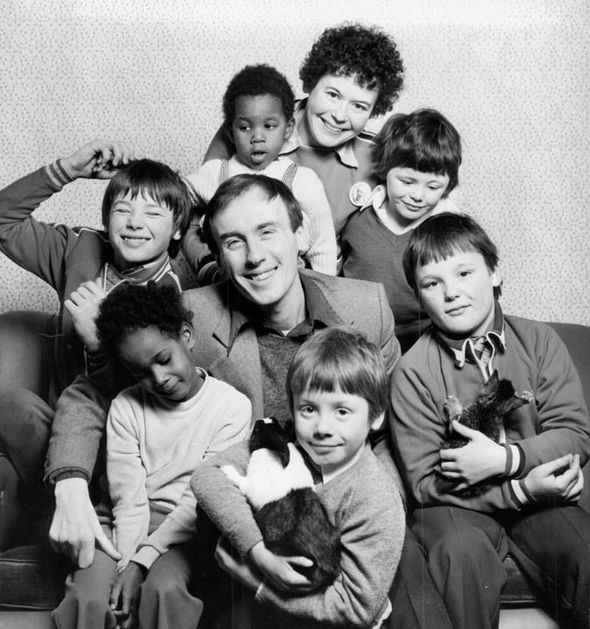 Christopher Timothy with first wife Susan and their children

Prostate cancer is the third biggest cancer killer in the UK. One man dies every 45 minutes.

It’s the most likely cancer to pass down through generations. Having a father or brother who has had it increases your risk by 2.5 times.

Having a grandfather or uncle who has had it increases your risk by 1.5 times. Being of black ethnicity increases a man’s risk by double to one in four.

Christopher adds: “To men who have concerns, I’d say, ‘Don’t be embarrassed, go and be checked. And people who have heredity connections should not think twice about it. There’s nothing to be ashamed of and it doesn’t hurt’.

“I don’t know whether having cancer has changed my attitude to life. I can’t even say that now I live every day to the fullest… I think I always have, really. At the end of the day, I always want to feel I’ve achieved something.

What to look out for

Some men with prostate cancer will experience various urinary symptoms.

● Needing to urinate more frequently, often during the night.

● Having to rush to the toilet

● Difficulty in starting to urinate

Early stage prostate cancer often doesn’t have any symptoms and so awareness of risk is key.

Anyone with concerns should visit www.prostatecanceruk.org or speak to Prostate Cancer UK’s Specialist Nurses in confidence on freephone 0800 074 8383, Mon-Fri 9am-6pm, until 8pm on Wednesdays.