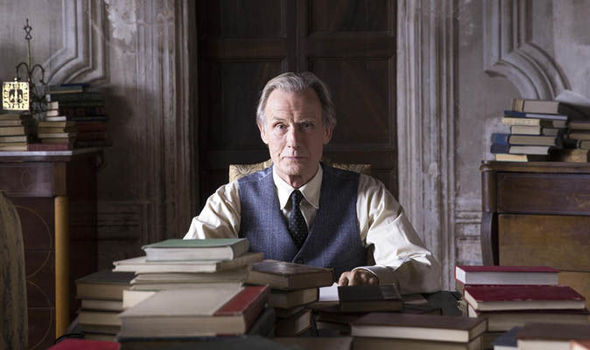 But British audiences might be a lot more discerning when they see her take on English country life.

As is often the case with British drama, the setting is a sleepy 1950s coastal town. But this is not the gentle, nostalgia-soaked vision familiar from Sunday evening TV.

For one thing everyone in the fictional Norfolk town of Hardborough has a different accent.

Even odder is the way the actors over-enunciate their stilted dialogue as if they are in a Radio 4 afternoon play.

As Julie Christie’s sombre narrator tells us this is the story of widow Florence Green (Emily Mortimer) and her attempt to open a bookshop in a long-abandoned house.

This puts her in direct conflict with Violet Gamart (Patricia Clarkson), a retired general’s wife and the town’s self-appointed leader.

We meet Violet at an awkwardly stiff soirée where she “advises” Florence to sell the old house so she can turn it into an arts centre.


The two leads only share a couple of scenes but they are so good that you almost forget about the mess they have walked into.

“You think it over,” she says menacingly in a new accent that she seems to have invented for the role.

Florence finds an ally in the brooding Mr Brundish (Bill Nighy), a wealthy local recluse who, Christie tells us, “adored books with the same passion with which he detested his fellow men”.

We then see him tearing authors’ photographs from the dust jackets of a large pile of books before tossing them on to his living room fire.

A jarringly chirpy score suggests that this is the typical behaviour of a lovable English eccentric.

But you would be forgiven for interpreting his blank expression as the crazed stare of a pyromaniac.

The roaming accents, the bizarre performances and Nighy’s picture burning give the opening act a certain nightmarish quality.

This begins to subside when a reasonably interesting plot develops.

Violet decides to sabotage Florence’s new bookshop and to that end recruits a flash middle-aged man (James Lance) who performs an unspecified role for the BBC.

Since Violet does not really seem to care about opening an arts centre, her motives are elusive.

A sub-plot involving Florence’s decision to sell Nabokov’s Lolita suggests it could be a moral crusade.

If that is the case Coixet needed to develop this strand a lot more.

There are unlikely scenes of crowds staring blankly at copies of the book in the shop window but the themes of Nabokov’s novel are never explained.

Thankfully the plot also brings Nighy into play when Brundish, who is not after all dangerously insane, decides to abandon his seclusion to help Florence.

Nighy cleverly underplays his role, even managing to milk a couple of wry laughs out of Coixet’s dialogue.

Mortimer is very watchable too, bringing a perfect blend of steel and self-doubt to Fitzgerald’s heroine.

The two leads only share a couple of scenes but they are so good that you almost forget about the mess they have walked into.

DEBRA GRANIK, the director who launched Jennifer Lawrence’s career with Winter’s Bone, returns with another moving and keenly observed film about life on the margins of American society.

Based on Peter Rock’s novel My Abandonment, Leave No Trace is the story of troubled army veteran Will (Ben Foster) who has been raising his 13-year-old daughter Tom (Thomasin McKenzie) in a tent pitched deep in the vast national park surrounding Portland, Oregon.

Like much in this beautifully restrained, wonderfully performed and deeply moving drama, what led them to this unconventional lifestyle is never explicitly stated.

But we get a sense of how long they have lived there by how adept they are at covering their tracks.

Their camp is expertly camouflaged and they have military-style drills to prepare for any police intrusion.

From time to time they leave the park for the city where Ben picks up his prescription post-traumatic stress disorder drugs which he sells for cash on the black market.

Tom loves her father but is beginning to crave the company of teenagers. When she is spotted by a hiker, we wonder whether she gave herself away deliberately.

After the authorities arrive, a well-meaning social worker keeps father and daughter together, finding a sympathetic farmer who offers them a cottage on his ranch and provides Will with a job.

While Tom enjoys having a roof over her head and begins to make friends, it seems Will is just playing by the rules to keep Tom and their social worker happy.

And when he begins to hear the call of the wild, a wedge opens up between father and daughter. This is one of those rare films that stays with you long after the lights have come up.

IF YOU can handle wobbly performances you should find much to admire in this mind-bending low-budget horror/ sci-fi .

Directors Justin Benson and Aaron Moorhead play brothers who go back to “the UFO death cult” they escaped a decade earlier.

When they arrive at the cult’s compound, they are confronted by the forgiving faces of their former friends, none of whom seems to have aged.

Then two moons appear in the sky and a cult member performs a magic trick involving a baseball that hangs in the air.

The Endless would have benefited from more accomplished lead actors and more expensive special effects.

But it is a stylish film with a clever and contentious climax that could make it a cult hit.

FANS of Japanese animé should love this beautiful fantasy adventure.

Maquia is a loph, an elf-like race of weavers in an idyllic mountain village who live to be hundreds of years old.

That peace is shattered when war-like dragon-riding knights invade their hideout, kidnap a loph called Leilia and force her to marry their prince.

And Maquia is carried away by a dragon and dropped in a war-torn village where she finds a baby in the arms of his dead mother.

A plot involving a plan to rescue the princess Leilia provides the action but at its heart this is a parenting drama about Maquia and her adopted human son.

YOU get an inkling of how great this fitfully amusing comedy could have been during the end credits when we see hilarious footage of middle-aged men playing a more sophisticated version of a game of tag that started in the school playground three decades earlier.

This bizarre ritual was described in the 2013 Wall Street Journal story that inspired the movie.

But what could have made an entertaining documentary is instead a laddish Hollywood comedy.

An opening scene shows how far these big kids will go as Hoagie gets a job as a janitor in Bob’s insurance firm so he can pounce on him during a meeting. But Jerry, rather implausibly, has never been tagged.

And as his wedding day approaches his old school friends see a golden opportunity to pin him down.

But only about half the jokes land and as the game drags on his attempts to blend riotous slapstick with a syrupy drama about friendship feel increasingly misguided.

The truth might have been stranger, funnier and more touching than the fiction.