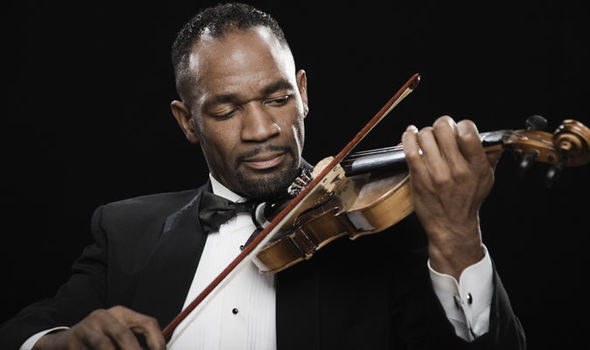 My mouth is dry with nerves.

I didn’t think I’d have to sit through the agony of another school concert again.

Of course, I’m proud of the small violinist on the third from the left in front of me.

What if he does something wrong?

I don’t want to be one of these pushy, alpha-mother tigers who expects their children to get everything right.

I’m simply worried because I know how much this means to him.

It’s not easy being a perfectionist. Around me, the audience is shuffling impatiently while the orchestra continues to tune up.

Why can’t they check everything’s in working order before coming onstage?

Then again, I’m no musician myself.

When I was a child, there wasn’t any spare money for lessons.

The closest we got was Sunday Night At The London Palladium when I would sit, nose almost pressed against the TV screen, singing along to the songs and pretending that I was playing the piano, running my fingers across the air on my imaginary keyboard.

But over the next few years, other things took precedence.

Getting my first job.

Moving out of London.

And then, one day, when I was browsing round a “collectables” shop in Devon, my eye fell on a piano with pretty candelabra.

“Victorian, she is,” said the owner proudly.

“Lovely piece. Going cheap. People just don’t have the room for them any more.”

I thought of the rambling house on the coast which we’d just bought (property was so much cheaper here).

By the end of the day the piano was mine.

“Aren’t you too old to learn?” asked my bemused husband, who always declared himself to be tone deaf.

Exactly what I thought. “Even more reason for this baby – and to have what we didn’t,” I replied.

There’s a stillness in the air now.

Sweat pours down my back as the violinist on the third from the left picks up his bow.

I know the tune by heart because he’s been playing nothing else for months.

There’s one tricky passage about two minutes into the piece which he sometimes gets wrong.

I might not be able to read music but I can tell when something jars.

My eyes close as I think back over the years to all the other school concerts when I’ve sat, nails digging into my palms, hoping that the children remember the right notes.

If they didn’t, it wasn’t for want of practice.

I would sit them down every day after school and at weekends until they were note-perfect.

Their certificates still hang round the house even though none of them have touched an instrument since leaving school.

“You nagged us too much,” said the “baby” whom I’d bought the piano for in the first place.

But I’d only done it for them.

Hadn’t I? Meanwhile, the pretty Victorian piano sat in the sitting room overlooking the sea, its candelabra gathering dust.

How I missed the music.

Occasionally, I’d sit down and tinkle the keys myself but the notes on the page meant nothing to me and I didn’t have time in my busy job to take lessons.

Besides, I’d feel silly starting again at my age.

“Perhaps we should sell it,” suggested my husband.

What? And lose all those memories?

I’m so nervous that I drop my concert programme.

The woman next to me bends forward to pick it up, despite the fact that she’s jiggling a toddler on her knee.

He’s done it. I want to stand up and shout “hooray!”

For a few moments, I sit there, enjoying the music.

But then – almost at the end – there’s a terrible sound like a screaming tom cat.

Everyone is putting their fingers in their ears.

How did that happen? He’d never got that part wrong before.

I want to rush up on stage and comfort him.

“They need to make mistakes,” whispers my neighbour, holding me back.

“It’s part of the learning curve.”

When my husband unexpectedly lost his job last year, he was miserable.

Of course, we were lucky to have his healthy payout, but it was no substitute for being bored.

That’s when the redundancy counsellor suggested taking up a challenge.

To my surprise, Brian chose a beginner’s violin course.

Apparently, music keeps the mind alert and lifts the spirits.

At first the sound was agonising.

And he didn’t always practise as regularly as he should have done.

Hadn’t I been too pushy with the children?

“I’ve signed up for a residential workshop,” he told me.

“Don’t mind, do you? You could come to the concert at the end.”

Brian is making his way towards me.

What can I say to make him feel better?

He’s beaming up at me like a small child.

When Brian first asked me out, I nearly turned him down because he’s a good four inches shorter than me.

But I was bowled over by his humour and besides, even perfectionists like me can’t help who they fall in love with.

“You were great,” says our flame-haired daughter, trying to stop our grandson from running off.

“I messed up a bit at the end,” says Brian, searching my face.

I’m about to say something.

But then I stop.

I haven’t seen my husband this happy for ages.

“Actually,” I say, giving him a warm hug, “I thought you struck just the right note.”

Then I go off to sign up Rufus for toddler lessons.

No pressure of course.