The Joint Comprehensive Plan of Action, also know as the Iran nuclear deal, is an agreement which was signed by Tehran to eliminate its stockpile of medium-enriched uranium – an ingredient used to make nuclear weapons.

However, Mr Netanyahu said following the nuclear deal Iran had moved its weapons programme to a secret location in a bid to hide it from the world.

The Israeli Prime Minister broadcast a video which he claimed showed an Iranian facility as he added that Tehran is continually expanding the range of its nuclear-capable missiles.

He said the secret “Project Amad” has been designed to produce and test warhead.

“Tonight I’m here to tell you one thing: Iran lied.”

“After signing the nuclear deal in 2015, Iran intensified its efforts to hide its secret files,” he said. “In 2017 Iran moved its nuclear weapons files to a highly secret location in Tehran.”

Mr Netanyahu referred to a secret Iranian nuclear project, codenamed “Amad”, which he said had been shelved in 2003, but he said work in the field had continued.

He added: ”Even after the 2015 deal, Iran continued to preserve and expand its nuclear weapons knowledge for future use.” 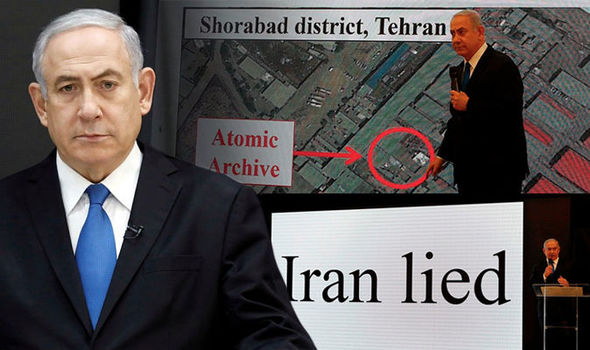 The Israeli leader spoke in English and showed pictures and videos purporting to be of historic secret Iranian nuclear facilities, as well as Iranian documents and plans to develop atomic weapons.

While the lion’s share of the briefing focused on what he said was past nuclear work and alleged obfuscation about it by Iran, Mr Netanyahu asserted that such activities had continued after the 2015 deal that was meant to curb Iranian capabilities.

Donald Trump has repeatedly branded the Iran nuclear deal, signed under his predecessor Barack Obama, a “very bad deal” and has threaten to withdraw the US from the agreement.

Today when asked whether the US will stay in the Iran nuclear deal, President Trump said: “We’ll see what happens.”

But he added that pulling out of the deal would send a positive message to North Korea.

Mr Trump said: ”I think it sends the right message. You know in seven years, that deal will have expired and Iran is free to go ahead and create nuclear weapons.” 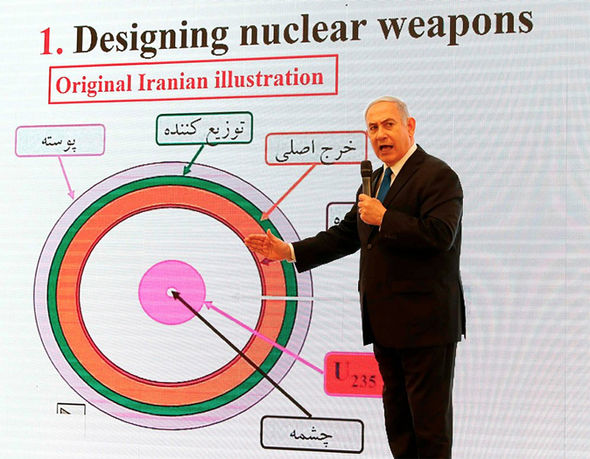 Mr Trump declined to say whether the US would pull out of the nuclear deal before a May 12 deadline for a decision – but he expressed his dissatisfaction with the pact.

The US President said: ”That is just not an acceptable situation. They’re not sitting back idly.

“They’re setting off missiles, which they say are for television purposes. I don’t think so.

“That doesn’t mean we won’t negotiate a real agreement.”

Mr Netanyahu and President Trump’s remarks come after a report by the Foundation for Defence of Democracies (FfDD) was leaked in January revealing Iran fired around 23 missiles since it had signed the deal. 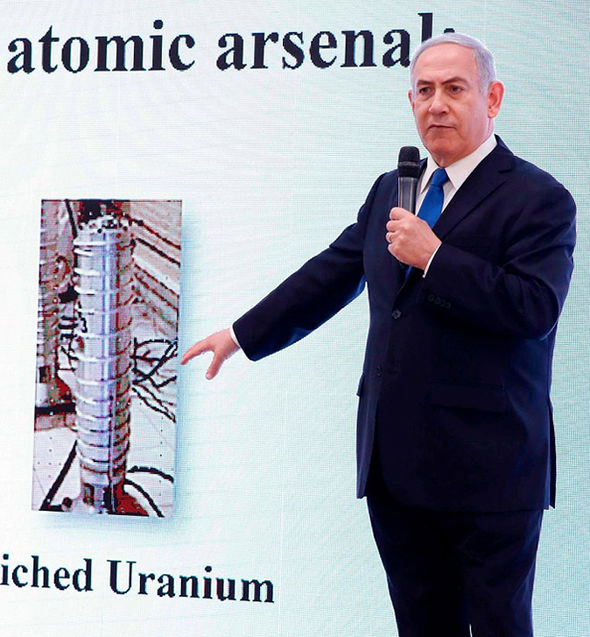 The FfDD report said: “Out of all the ballistic missiles Iran fired in 2017, only four or five missiles can be considered nuclear-capable.

“It is highly likely that the administration’s threat intimidated Tehran, altering its flight-testing calculus.”

According to the report’s author, Behnam Ben Taleblu, a senior Iran analyst at the foundation, researchers “identified as many as 23 ballistic missile launches by Iran since the conclusion of the July 2015 nuclear deal”.

The report also cited an Iranian outlet which quoted Tehran’s Islamic Revolutionary Guard Corps complaining of test delays over concerns of a potential response by the US.