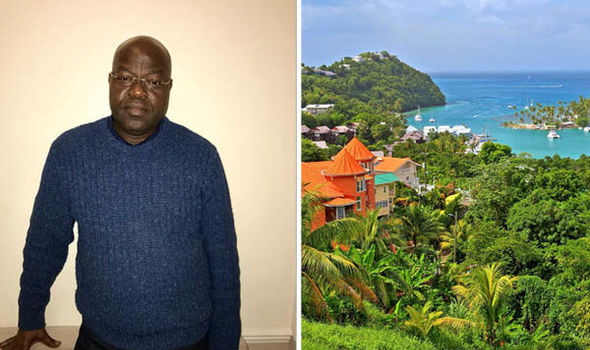 Kehinde Agoro, who was tempted by an investment in St Lucia

Another common factor is that most victims are contacted out of the blue, typically by telephone, email, text and in some cases, a knock on the door.

Dodgy salesmen use a variety of methods to hook their victims, including “sure-fire” investment schemes offering double-digit annual returns, or glamorous opportunities to invest in global property.

It was this final trick that hooked Kehinde Agoro, 57, who received a phone call in 2012 promoting an investment in the Freedom Bay holiday resort on the paradise island of St Lucia in the Caribbean.

Family man Kehinde, who lives in Essex and works as a consultant pathologist, was offered a share of business profits and the opportunity to take regular holidays in the luxury eco-resort.

“I don’t even know how they got my number, but it all sounded great, a fantastic five-star hotel, beautiful island. There was no talk of risks at all.”

He assumed his investment must be watertight because it was being offered by an IFA firm called The Pensions Office, which was fully authorised by City watchdog the Financial Conduct Authority (FCA).

It may sound too good to be true now, but at the time it made sense, Kehinde said: “It was in a prime area, I was told I would get guaranteed high returns.

“I could even go there a couple of times a year with my family and relax.”

Kehinde invested through a self-invested personal pension plan (SIPP), which offer complete freedom to invest where you like.

He invested more than £30,000 and was not alone, thousands of SIPP investors have ploughed small fortunes into Freedom Bay and other exotic schemes.

Many of the advisory firms promoting them have since been declared in default by the Financial Services Compensation Scheme (FSCS), including The Pensions Office.

An increasingly suspicious Kehinde contacted law firm Hugh James to pursue The Pensions Office in 2014, but it was placed into liquidation soon after.

Hugh James is representing hundreds of SIPP investors in a group legal action that is going to the High Court.

Kehinde considers himself lucky, victims of pension fraud and mis-selling can lose their lifetime savings overnight.

The fact that his adviser was authorised played a large part in his success.

Last year, the Insolvency Service banned The Pensions Office’s managing director Keith Popplewell from being a company director for nine years, saying he had “misused his position” as an approved adviser by transferring low-risk personal and occupation pension products into Sipps and failing to advise clients on the high-risk unregulated underlying investments.

Neil Stockade, head of actions and mis-selling at Hugh James, said the FSCS paid £105 million worth of SIPP claims in the last tax year.

The overall SIPP provider should also undertake due diligence to ensure any investments held inside its wrapper are appropriate, but many have failed to do so.

The FSCS has a fund of last resort to cover claims against regulated firms, but these are complicated legal cases with no guarantee of success .

He said: “The maximum the FSCS can pay for investment and pension cases is £50,000 per person for each claim against a regulated firm. If you fall victim to an unauthorised adviser, seeking redress can be even tougher.”

Stockade said around 95 per cent of the pension victims he represents were initially cold called by unregulated firms, typically offering to unlock what they described as a “frozen” pension and provide guaranteed returns instead: “Exercise extreme caution if someone contacts you unexpectedly.

They may offer a free pension review or unique investment opportunity, which will almost always be entirely unsuitable.”

He said never rush a decision, as many victims are pressured into making rapid pension transfers: “In some cases, couriers were dispatched to their home with supposedly urgent documents to sign.”

Check that your independent financial adviser is authorised by the FCA to advise on pension investments, by going to Register.fca.org.uk.

If you suspect you have fallen victim, contact your pension firm immediately as you may still have time to stop the transfer or related investment.

You can make a claim directly to the FSCS or complain about a regulated fi rm to the Financial Ombudsman Service.

“However, these are complex cases and you could spend a lot of time dealing with the paperwork.

“A specialist solicitor will cover all the points and maximise your chances of receiving what you are owed,” he added.

Kehinde was one of the lucky ones: most victims of pension mis-selling see their hopes of a happy retirement swept away, so exercise extreme caution.