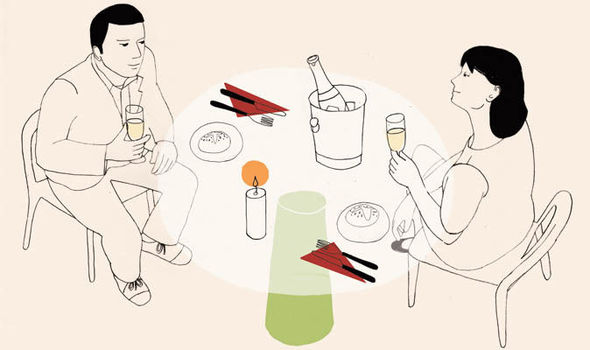 Kate Riordan writes The Treat, an exclusive short story for the Express

In one candle-lit corner sat a couple in their late fifties.

They were well-preservedbbut no longer turned heads when they went out for dinner. Their starters arrived, brought by a girl with a bottom too wide for her tight black trousers. He had ordered the soup, which came with a lopsided swirl of cream.

She had wanted to save her appetite for the desserts so had gone for the ham and melon. Beneath her fork, the balled fruit shifted and dodged.

He glanced up as the fork’s tines scraped against the plate. Around them the restaurant buzzed and hummed. The table had been booked two weeks earlier in order to secure it at a reasonable hour. Their actual anniversary had fallen on the preceding Thursday and had gone unmarked.

On the next table, a chorus of “Happy Birthday” started up and, by the second line, most of the restaurant had joined in awkwardly. Still wrestling with her melon, she mumbled the words gamely. He continued with his soup. The bonhomie of the singing emboldened her.

“Will you be playing golf with Geoff on Monday?”

He paused, spoon aloft, and cocked his head on one side. She watched as the fold of skin between his eyebrows deepened, his expression one of studied bewilderment.

“Don’t I always play golf with Geoff on Mondays?”

“Yes, I suppose so,” she replied, and her fork clattered as it landed heavily on the plate, the defiant melon abandoned untouched. During the hiatus between the starters being cleared and the main courses brought, she glanced over at the neighbouring table.

The woman who had been sung to was flushed with the earlier attention and the champagne her husband had ordered. She and the rest of her guests were listening to him tell a story until, spontaneously, she interrupted with an anecdote of her own, at which he laughed generously. After the main courses arrived, she picked up her glass of wine before realising it was empty.

“You’ll want another of those, will you?” he said.

“We should have got a bottle in the first place, shouldn’t we? It’s a special occasion, after all.”

“So you want a bottle rather than a glass?”

“Oh no, you’ve hardly touched your glass and I couldn’t drink so much by myself.”

The sommelier, an officious man with a French accent that disappeared when his shift ended, hovered over them. “Madame, shall I bring the wine list?”

She twisted her rings around with fluttering fingers.

She smiled her apology and the waiter melted away without a word. In the intervening silence, she ate with her eyes lowered to her plate. He sawed methodically at his beef, spearing each chunk efficiently. When he opened his mouth, his fillings flashed.

She tore at her meat, dragging the flesh apart rather than cutting it. The hastily drunk wine was making her feel reckless, like she might accidentally scream. He stopped eating to watch her. She carried on anyway, and then spoke again.

“So what do you and Geoff talk about when you’re together?”

“What do we talk about?”

“Yes, you’re out with him for hours, week in, week out. You must talk about something. It can’t be silent the whole time, can it?”

“Are you asking me specifically what Geoff and I talked about last Monday, or is it a more general question?”

His forehead was perplexed again, and he had placed his cutlery carefully down on his plate. From her perspective, the knife and fork were at 10 to two, like his gloved hands on the steering wheel. He took those hands now and clasped them together under his chin in a display of patient attention, the sort shown to an indulged child.

“I just wondered what you talk about. I thought of you up there, walking those 18 holes with him and I couldn’t for the life of me imagine what you said to each other.”

“I’m sorry, I’m not really sure I understand…”

“Oh, don’t you? I didn’t realise I was speaking Chinese.”

He sighed and picked up his cutlery once more. She folded and refolded the scalloped napkin in her lap with great concentration, covering over the single tear that had fallen on to it. She refused the dessert menu so he asked for the bill, which he paid with his own card, not the joint one.

She snorted at that and he looked up at her with a wounded expression. As he placed a note on the silver dish for the tip, she saw a slight tremor in the capable hands she knew as well as her own. Outside the restaurant it was cold, a cold so still and brittle that a frost was already creeping and spreading, its ghostly patina visible on the bare trees.

The car was parked further down the road and they had almost reached it when he suddenly lost his footing, the smooth soles of his smart shoes sliding on black ice. He landed heavily in a shallow but dirty puddle, his rear end soaked through. She looked wildly around to see if anyone else had noticed and their eyes met.

He held her gaze, still sitting in the puddle in his good navy suit. Then his shoulders began to shake and she realised he was laughing. Ah, you’re still in there, she thought, as she began to laugh herself.