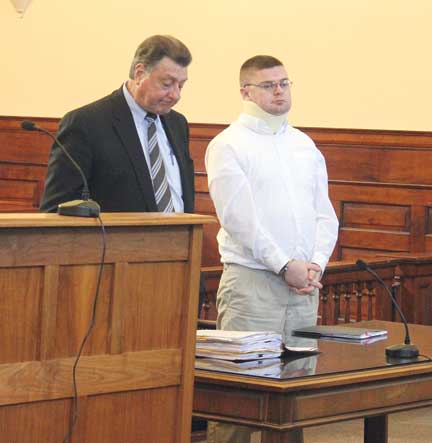 MARIETTA — The manufacturer of a set of explosives found both in Marietta Municipal Court and in a private home in 2016 will remain in the care of Appalachian Behavioral Health following a hearing Friday.

Washington County Common Pleas Judge Mark Kerenyi held a further commitment hearing Friday in the case of Daniel Buchman, 35, of Marietta who last year was found not guilty by reason of insanity of three charges: illegal manufacture of explosives, a second-degree felony, and two fifth-degree felony counts of unlawful possession of a dangerous ordinance.

Kerenyi said the most recent report from the psychiatric hospital as he upheld the commitment of Buchman in ABH, noting that clinicians there state Buchman still is unaware of the dangerousness of his delusions.

“Mr. Buchman has presented disordered perception and continues to be a danger to himself and others,” Kerenyi said in court. “The defendant is a mentally ill person subject to a court order, and the court finds that he does have a mental disease.”

In December 2016 Buchman was arrested by a probation officer suspecting the influence of alcohol or drugs on Buchman’s behavior, which would have been a violation of his probation.

But when his personal backpack was also confiscated the night of his arrest, it was not searched until the following morning in Marietta Municipal Court, at which time an Arizona Tea can was found rigged as a bomb.

“We want to note that there are parts of the (ABH) report that are incorrect with regard to the offense,” pointed out Buchman’s attorney, George Cosenza. “He did not take that backpack into the court. And number two, the report notes Mr. Buchman has difficulty making eye contact during interviews, that’s a direct result of a physical inability to raise his head.”

Buchman has been in the custody of the psychiatric hospital since the summer of 2017 after the court ordered his transfer there to be brought back to competency for purposes of standing trial.

Competency was restored last year before Kerenyi found Buchman not guilty by reason of insanity in August and ordered Buchman instead to be held in the psychiatric hospital for up to the eight years he would have faced of prison time if found guilty.

Kerenyi upheld that holding, with Washington County Assistant Prosecutor Alison Cauthorn noting for the record that Buchman is being held in the least restrictive setting available to maintain the public peace and safety.

He set the next commitment hearing for June 18, 2021, to review whether Buchman still requires continued holding.


PARKERSBURG — The first fundraiser for the 2019 edition of Riverfest is Cash Bingo for 5 p.m. today at Moose …