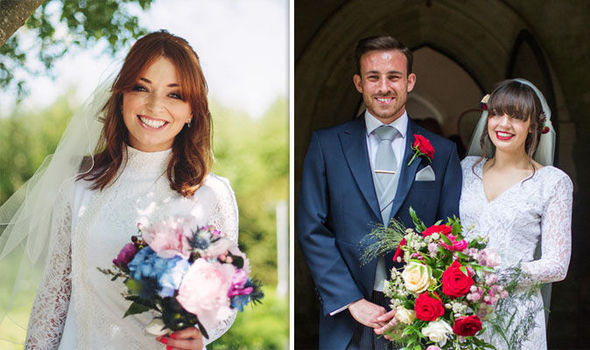 IRENE O’BRIEN, 36, is a TV fashion stylist from Dublin.

She married husband Mel at Mount Druid in Castletown Geoghegan, Ireland in 2016.

Years before I got engaged my mum and I were cleaning out the attic when she appeared with a large box.

I had an inkling it might be her wedding dress but when I looked inside I was amazed it was in near-pristine condition.

At her urging I tried it on and it fitted like a glove.

I fell in love with it.

I’m quite sentimental so the idea of wearing my mother’s dress did appeal to me but if it hadn’t been to my taste then I wouldn’t have worn it.

She’d bought the dress from a boutique in Dublin.

At the time my parents were working hard to save for their wedding when she spotted it in a shop window. 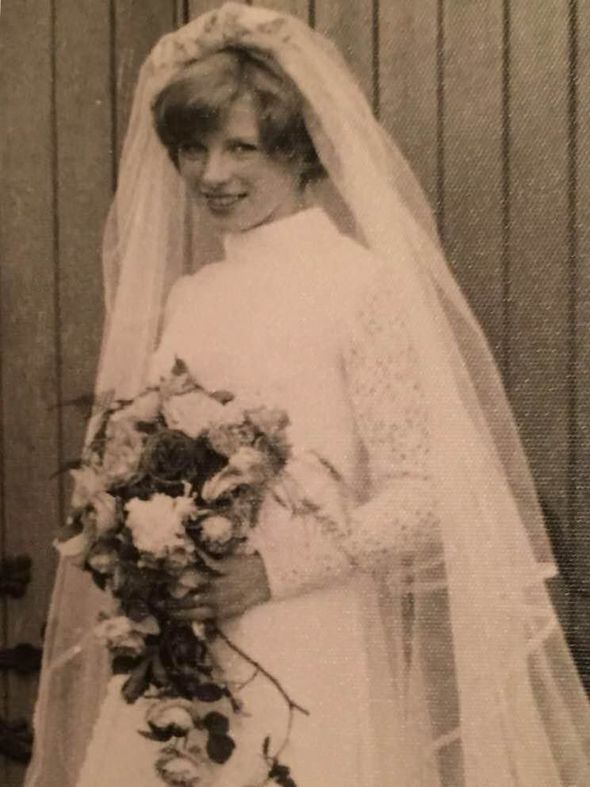 Ann looked stunning on her wedding day in 1969

She tried it on, loved it and asked the shopkeeper if she could pay in instalments.

The owner agreed and my mum Ann, who waitressed at night, saved up all her tips and wages so she could afford to buy it.

But one day she went in and the shopkeeper said someone else wanted to pay for the dress upfront so she was going to sell it to them.

Mum was distraught so she spoke to my dad.

They scrimped and saved to find the money.

She worked really hard for it so I’m glad she got it.

When Mel proposed to me in 2015 I thought of it straightaway.

It’s a white dress made from sateen with a lace overlay down the middle.

I loved the high neckline and the sleeves stood out to me because they’re lace and button beautifully around the wrist. 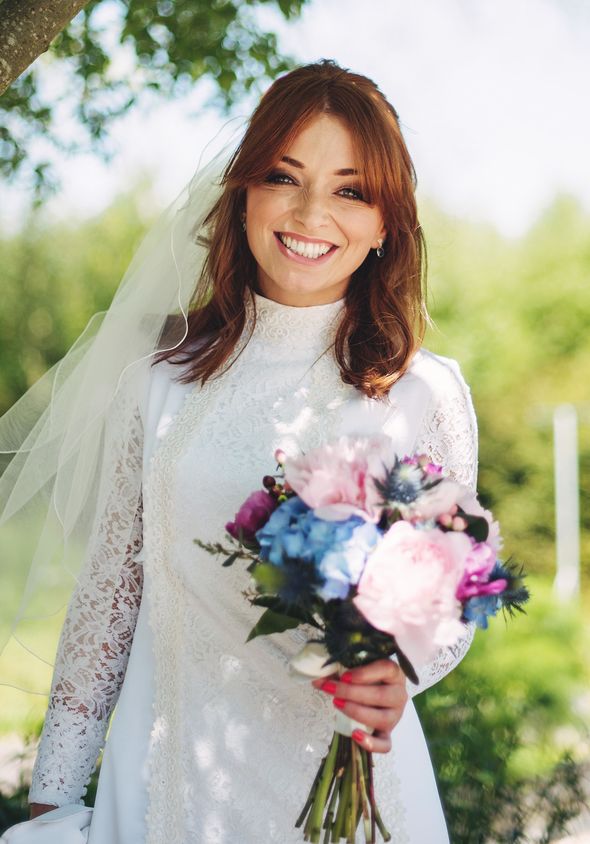 Irene knew she had the perfect dress for her

There were a couple of tiny marks on the neckline but nothing that concerned me.

Someone had advised mum to wrap it in acid free paper and put it in a box for prosperity and I’m just so glad she did.

I took it up at the front and changed it from a column style to a high-low hem.

And on my wedding day I’ve never felt more certain I picked the right dress. 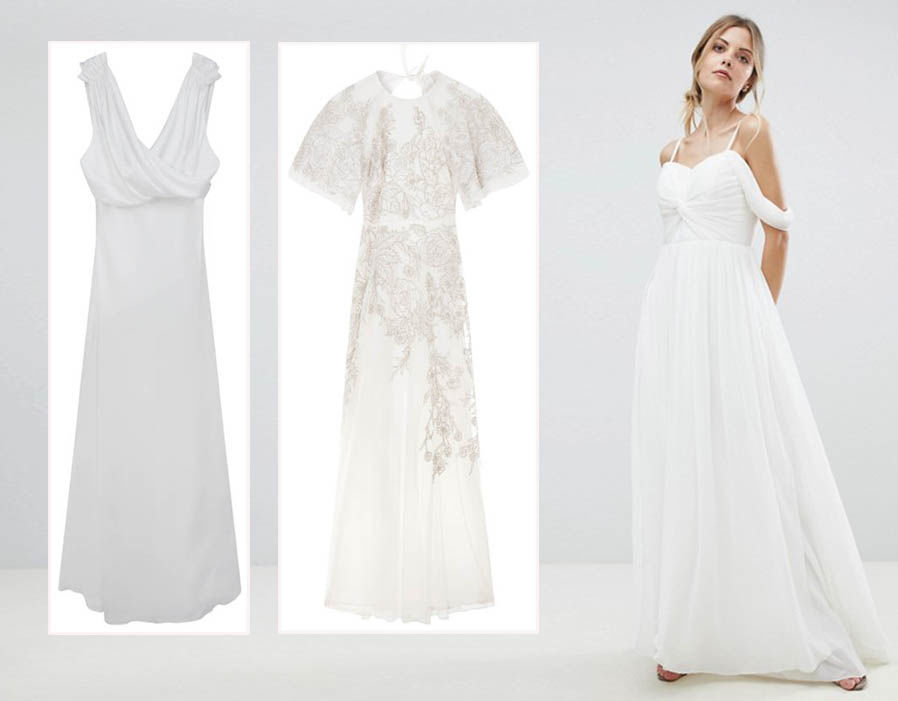 I was elated to wear it and continue its story.

I had planned to take it off earlier but kept it on until the evening.

Mum was thrilled and liked the alterations.

She never wanted me to feel pressure to wear it but said: “There is no greater compliment to me than you wearing my dress.” 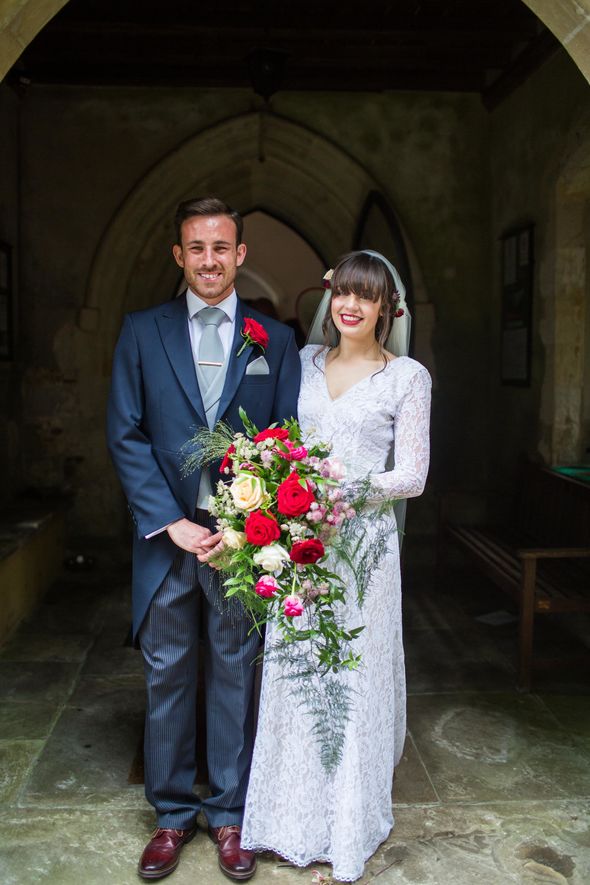 Rose Mintern said that when her dad saw her in the dress, he was overcome with emotion

ROSE MINTERN, 29, is a homemaker from Bedfordshire.

She married Tom at St Mary Magdalene Church in Westoning in 2016.

When my dad saw me for the first time in my gown as we were leaving for the church he was overcome with emotion.

He said it took him back to his wedding day.

A lot of the guests at our ceremony were equally taken aback when they discovered I was wearing my mum Sue’s dress.

But they all thought it was a lovely thing to do.

For me it was a no-brainer.

My mum and I are exceptionally close so I always knew I wanted to wear her dress. 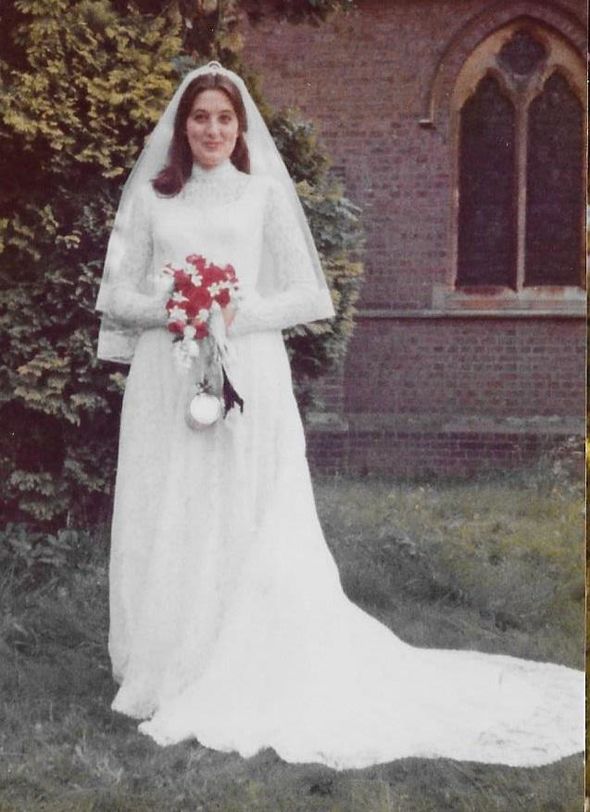 Rose has always been a lover of vintage clothing

Just knowing my grandfather had walked her down the aisle in August 1980 in what is now my dress made it really special.

Not that mum ever expected me to wear it.

As the last of three sisters to get married I think she always thought I would do the same as them and head to a bridal shop for my own gown.

But I’ve always loved anything vintage and a bit different so I knew mum’s dress would appeal to me because it is one of a kind.

There’s no chance anyone will ever have the same gown as me because my mum bought it from a local dressmaker in 1980 who only made a handful of dresses. 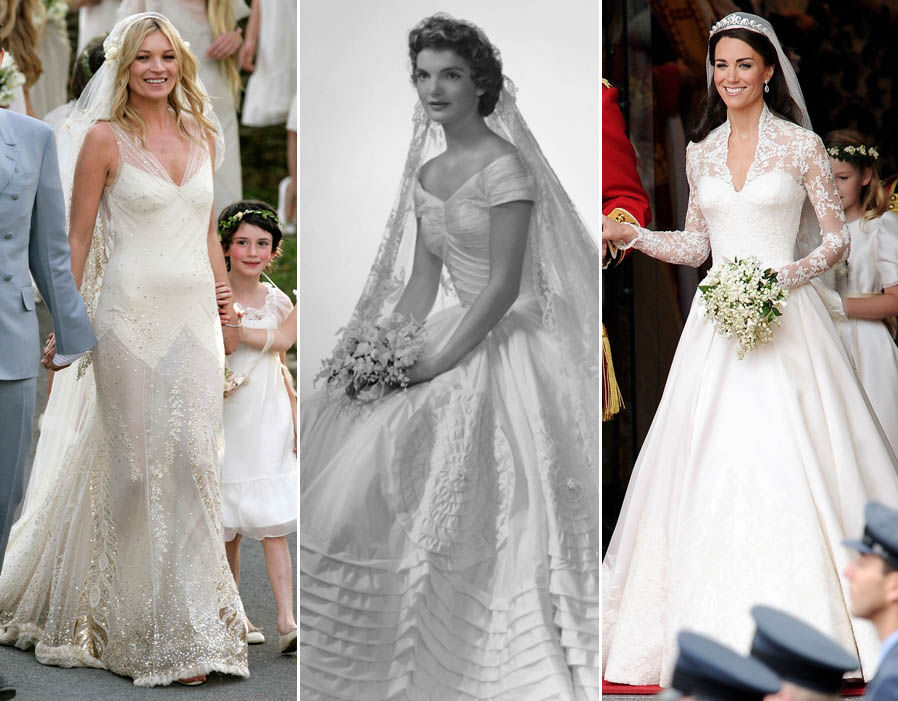 The most iconic wedding dresses

It was originally a full length, white A-line dress but I did make some alterations to the neckline and skirt fitting which mum knew about because she came to the dress fittings with me – but other than that it remained exactly the same.

When I told Tom what my plan was he thought it was a great idea because he knows how close we are.

I even wanted to wear her veil but unfortunately couldn’t find it.

Perhaps understandably mum got quite emotional on the day but I just felt incredibly proud.

And it turns out our similar tastes extended beyond the dress: we even had virtually the same bouquet, although that wasn’t planned! 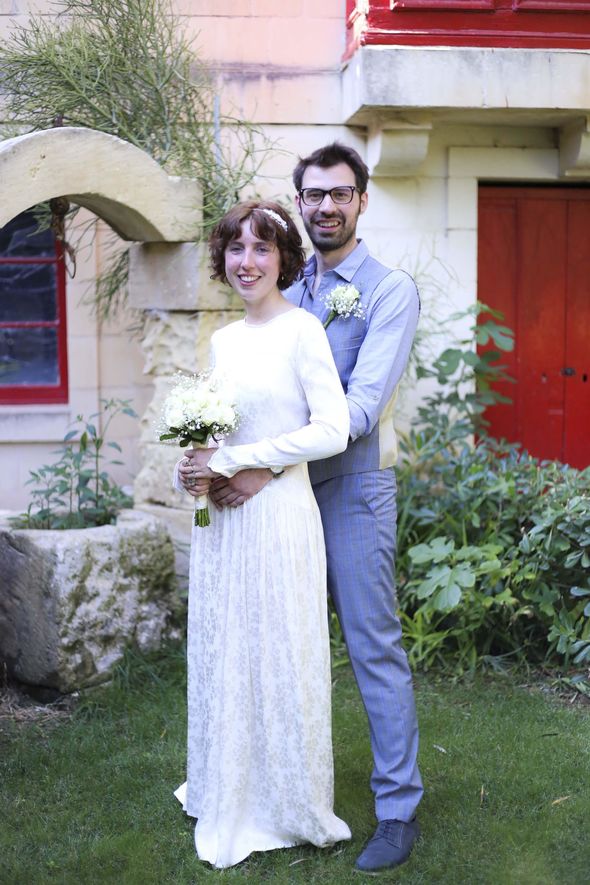 Thursa wore her grandmother’s wedding dress, which was found in a bin liner in the wardrobe

THURSA LAMOON, 29, is a communications and marketing coordinator from Gloucestershire.

She married husband Jasper in an outdoor ceremony in Malta in 2016.

My grandmother Barbara passed away eight years ago and it was only when my mum, sister and I were going through her things that I stumbled on her wedding dress scrunched up in a plastic bag at the back of her wardrobe.

Despite the fact that it hadn’t been particularly well looked after it was in surprisingly good condition.

Handmade in the 1940s the dress had been designed by my nan’s aunt who was a court dressmaker and must have had access to some really expensive fabrics because I’m pretty sure it’s made from parachute silk.


Everyone loved it, especially my mum’s side of the family who found it really touching

It’s stunning with pointed sleeves and a circular skirt covered in an intricate oral design and hand-sewn beads down the back.

My nan’s sister was the first person to wear it and then it was passed on to Barbara.

Although I’d never harboured any feelings about wearing a family heirloom I was intrigued to find out what it would look like on me.

And as soon as I’d tried it on I had that spine-tingling moment every bride has when they know they’ve found the dress… and it fitted me perfectly.

I would have been happy to spend up to £400 on my perfect dress. 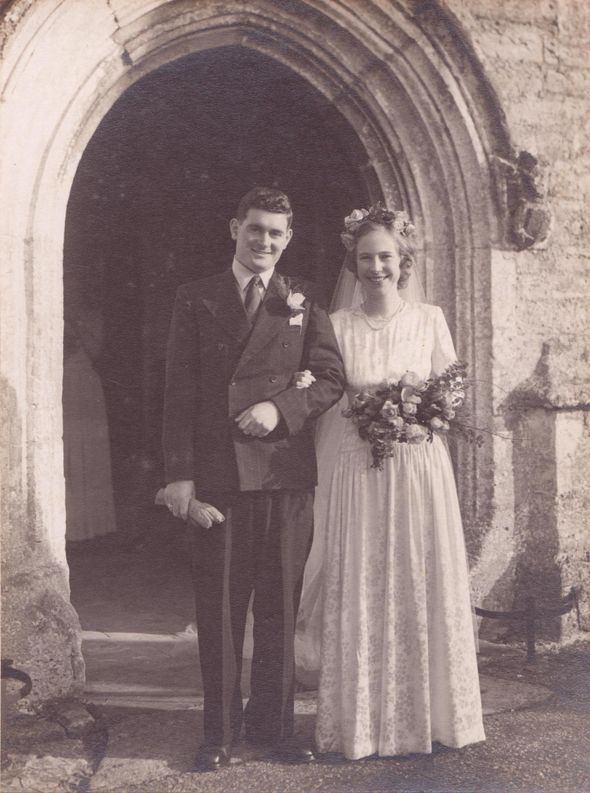 Luckily, though, having the dress tidied up by a seamstress only cost £50.

In fact the only change I made was having some material panels removed because they’d been added when my aunts wore it for their amateur theatre productions in the 1970s.

Given its age and the delicacy of the material I decided against getting it dry-cleaned and was able to get the few little stains that remained removed with some organic wet wipes.

I remember on the big day itself how connected I felt to my nan.

We were always really close so it felt extra special to be wearing her dress.

I did worry that I might be too hot because we were getting married in a rustic farmhouse in Malta and I was in long sleeves.

In the end I needn’t have fretted because the silk fabric was really cooling.

We had a big canvas picture blown up of my grandparents on their wedding day in in Weston-super-Mare.

Everyone loved it, especially my mum’s side of the family who found it really touching.