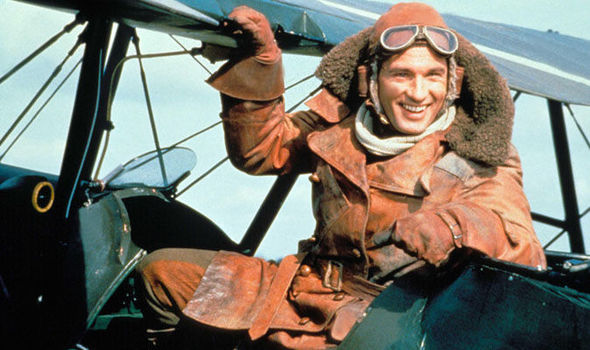 Neil Dickson as Biggles in the film version

The intrepid airman more commonly known as Biggles, who got out of more tight scrapes than Houdini while maintaining a stiff upper lip throughout, played a key role in Britain’s finest hour by inspiring a new generation of pilots to defend their country against the Luftwaffe in 1940.

That was a source of great pride to Biggles’ creator, Captain William Earl (WE) Johns, who himself had served King and Country as a pilot in the First World War, and been captured and held by the Germans in a POW camp. 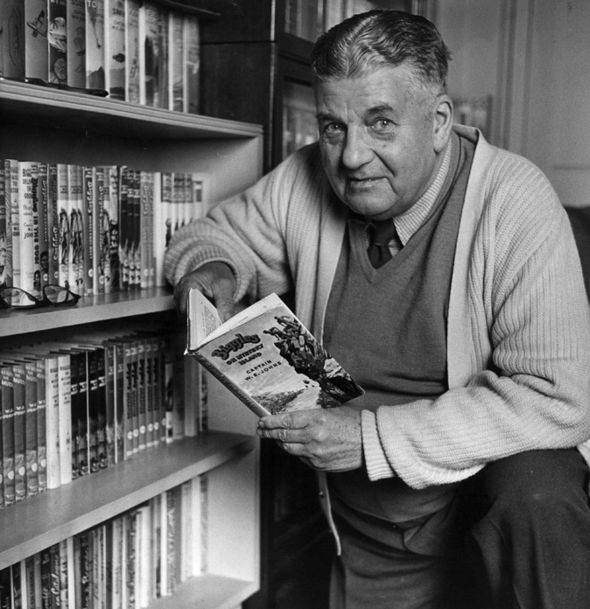 Johns, who died 50 years ago today, lived a life almost as action packed as Biggles.

For the first three years of the conflict he served in the Army, seeing action at Gallipoli where more than 130,000 lost their lives in a disastrous military campaign.

His regiment was later posted to Egypt and Greece. He came down with malaria and decided to put in for a transfer to the Royal Flying Corps.

His first solo flight lasted just five seconds in the air as he crashed on take-off.

But he persevered to become a bomber pilot, taking part in air raids on Germany.

He had been in his new job for only six weeks when he was shot down by enemy aircraft and imprisoned.

He tried to escape with a fellow prisoner but their attempt was thwarted by guards.

Later on Johns did break out from the camp but after three days on the run was apprehended by a burly Bavarian farmer with a 12-bore shotgun.

He returned to solitary confinement and remained in captivity until after the Armistice was signed.

He was to put his wartime experiences to great use in the years ahead. 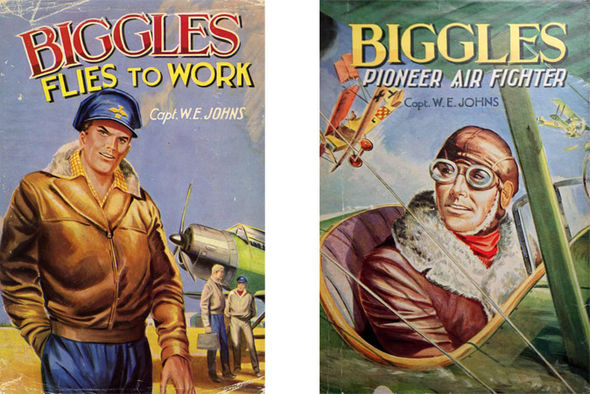 Two of the many Biggles books written by Captain WE Johns

His first Biggles story, The White Fokker, appeared in the aviation magazine Popular Flying, which Johns edited, in 1932.

It proved an immediate hit with readers.

The first Biggles book, The Camels Are Coming (below), a collection of the magazine stories, appeared later that year.

Johns was to write 96 Biggles books over the next four decades.

The early adventures were set in the First World War and begin with the hero described as a “fair-headed good-looking lad still in his teens”.

Biggles, like Johns himself, learns to fly “after meagre instruction” but unlike his creator, he had more success in escaping from the clutches of the enemy. 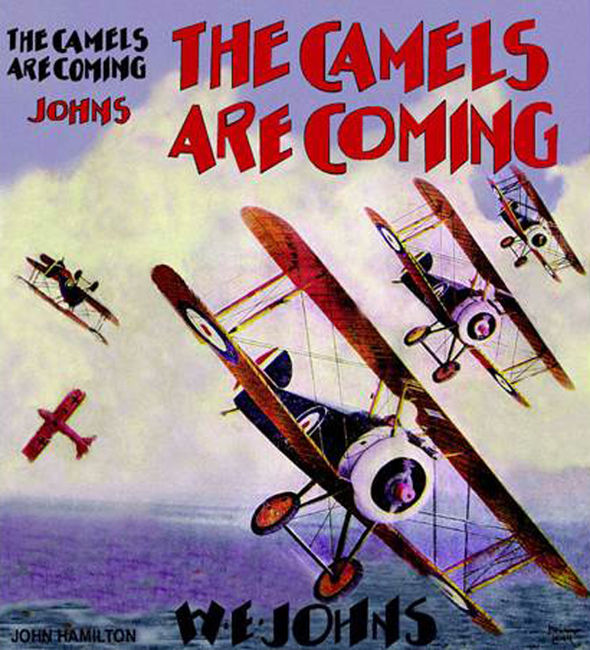 The Camels Are Coming was the first Biggles book

Having defeated the Germans with no fewer than 35 confirmed combats, Biggles, with his cousin Algy and young protégé Ginger, broadened his horizons.

In The Cruise Of The Condor, published in 1934, the trio have to overcome giant snakes, huge birds and swarms of ants in a search for treasure in South America.

Biggles can’t avoid danger even when he’s on holiday. In Biggles In Spain, published in 1939, our hero’s ship is sunk and he becomes embroiled in that country’s civil war.

Johns loved travelling and spent several weeks each year visiting foreign countries, providing him with plenty of material for his books.

In the mid-1930s he became increasingly concerned about the threat posed to world peace by the fascist powers and warned against cuts to the Air Force. 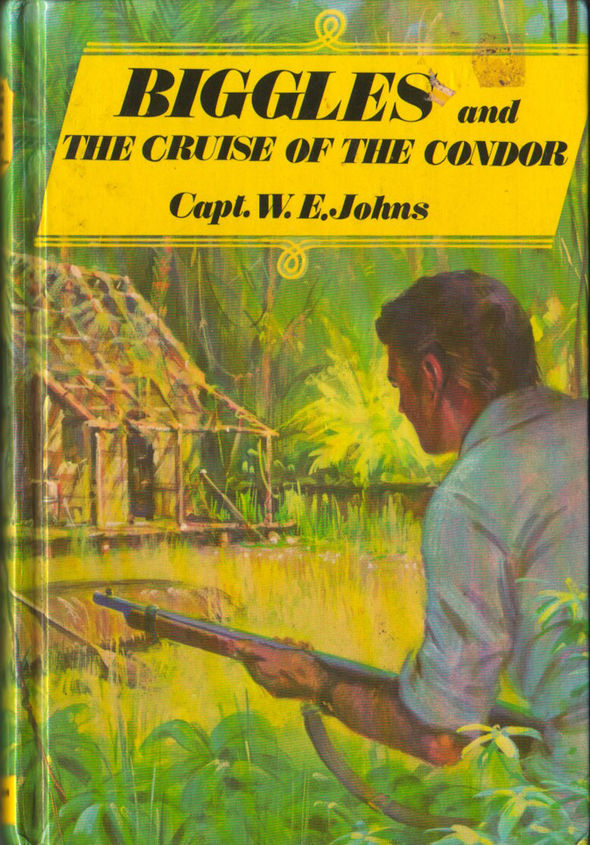 In The Cruise Of The Condor the trio have to overcome giant snakes, huge birds and swarms of ants

His output at this time was quite remarkable.

In addition to his Biggles stories he wrote other thrillers and mysteries, as well as columns on aviation and gardening and contributed short stories to the Daily Express.

“Through his writing he had found fame and security. Only the gathering European war clouds threatened his idyllic existence,” noted his biographers Peter Berresford Ellis and Piers Williams (the pen name of Jennifer Schofield).

Biggles begins the Second World War caught up in the Nazi invasion of Norway and has to use all his wits to avoid a firing squad.

But his greatest moment was yet to come.

In the summer of 1940 Britain stood alone.

The odds looked to be heavily against the RAF as the Battle of Britain began.

But the Germans didn’t have Biggles on their side.

In the foreword to his 1934 book Biggles Of The Camel Squadron Johns had written: “I hope that something may be learned from the ‘combat tactics’ employed by Biggles and his friends by those who may one day find themselves in the cockpit of a fighting aeroplane carrying on the glorious traditions of the flying service.” 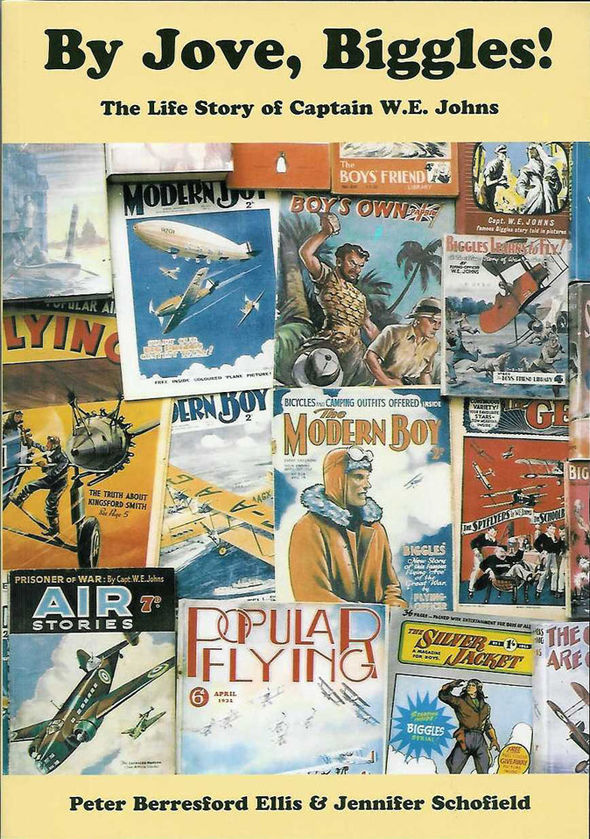 The only biography of Captain WE Johns

A leading fighter pilot was interviewed by a reporter in 1944 and asked to what he owed his success. He replied: “Biggles.”

Johns’s books not only acted as training manuals for pilots, they also inspired people to take to the skies.

“Perhaps Fighter Command’s single most effective recruiting sergeant was Captain James Bigglesworth. He was a devastatingly romantic figure to the 12- and 13-year-olds who went on to emulate him a few years later,” noted Patrick Bishop in his book, Fighter Boys: Saving Britain 1940.

After the war Biggles and his pals, who now included the monocled Lord Bertie Lissie, continued to thrill new generations of readers with their globetrotting escapades. 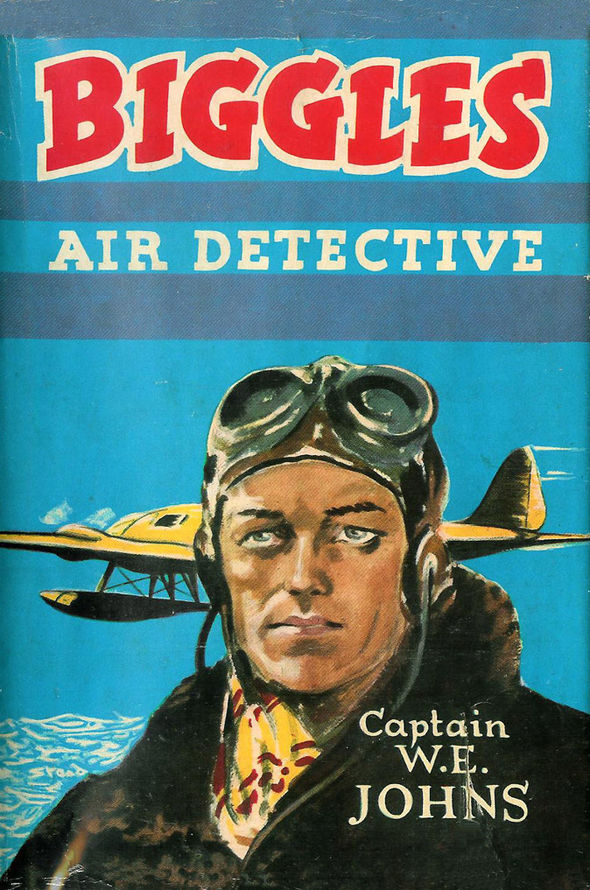 In 1963, a Unesco survey found that Biggles was the most popular schoolboy hero in the world. There were not just the books but serialisations in comics, magazines and newspapers and also radio and television series.

But not everyone was happy. Biggles began to be attacked by the politically correct brigade.

They said the books were “outmoded” and “bad for children”.

The titles were removed from libraries.

One borough librarian pompously declared that when children asked for Biggles his librarians “would recommend other books we consider better”.

What a misguided approach!

Biggles, as anyone who has read the books will testify, was not a racist.

“While men are decent to me I try to be decent to them, regardless of race, colour, politics creed or anything else,” he once declared. 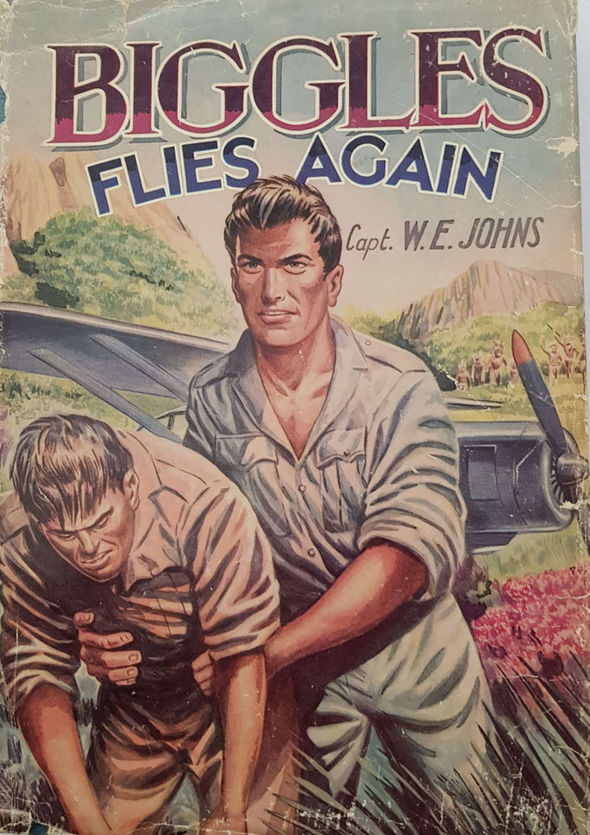 In most of the books the villains are white men, usually out to steal from poorer countries.

In The Cruise Of The Condor Biggles is told that the crooks have shot dead a black man who had helped him.

He sits silently for a moment but when he looks up his face had a strange expression.

He keeps his word. Biggles’ world view reflected that of his creator.

“I’m completely non-political and non-racial in my books,” Johns once explained.

The amiable Captain was at work on Biggles right up to the end of his life.

On the morning of June 21, 1968, he had finished writing page eight of his latest story, Biggles Does Some Homework, when he went upstairs to take his wife a cup of tea.

He sat down in his chair but then collapsed and died.

Yet 50 years on, Biggles is enjoying something of a revival.

The books are back in print and thrilling readers once again.

You really can’t keep a good man down.