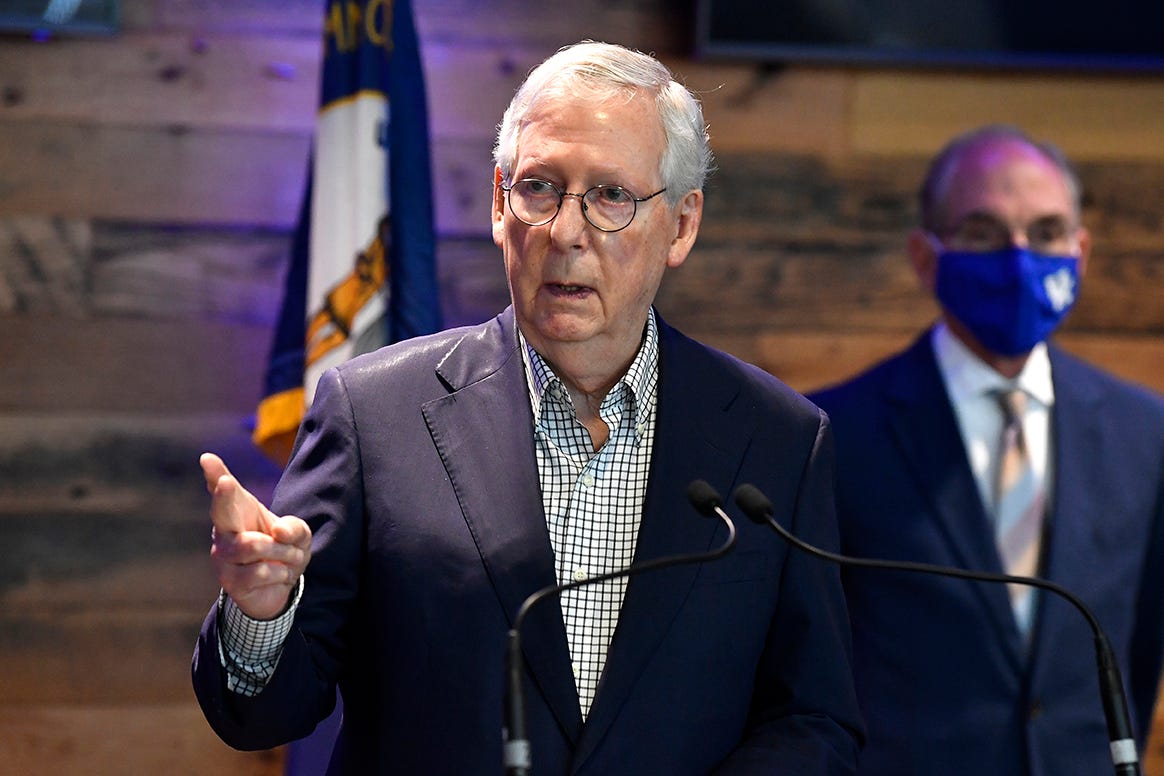 Washington – Senate Republican leader Mitch McConnell says it’s a “big lie” to call the new voting law in Georgia racist and he warned big business to “stay out of politics” after major corporations and even Major League Baseball distanced themselves from the state amid vast public pressure.

The choice by the GOP leader to dive into voting politics lends heft to efforts nationwide to install strict new voting laws after Donald Trump’s false claims of fraud that cost him the election to Biden. The new laws are aimed at scaling back early vote and other options that became wildly popular during the pandemic.

Even more, McConnell’s warning to big business not to get involved shows the scramble Republicans face as progressive groups are shining a spotlight on corporate America to live up to its brands and values as Congress takes on voting rights, gun violence and other issues.

The Republican leader has been among the most outspoken champions of the role of big money in elections, promoting the free-flow of undisclosed dollars to campaigns as a form of Constitution-protected free speech.

But companies temporarily halted giving to many Republicans after the deadly Jan. 6 Capitol siege, when the former president urged like supporters to fight for him and hundreds stormed the Capitol.

Speaking in Kentucky, McConnell said Monday it’s simply “not accurate” to say the Georgia law is making it more difficult to vote.

McConnell also criticized Biden for criticizing the law, saying the president’s claims had been fact-checked as false.

“The President has claimed repeatedly that state-level debates over voting procedures are worse than Jim Crow or ‘Jim Crow on steroids.’ Nobody actually believes this,” McConnell said in a lengthy statement earlier Monday.

“Nobody really thinks this current dispute comes anywhere near the horrific racist brutality of segregation.”

The new law shortens the time frame between primary and general elections, which also narrows the options for early voting. To counter the popular “souls to the polls” events at Black churches on Sundays, the law now requires two Saturdays for voting. It makes it a misdemeanor to hand out food, drink or other benefits to voters waiting in long lines at polling stations.

McConnell more pointedly warned the big business that have been responding to public pressure on their corporate actions not to give in to the advocacy campaigns.

“It’s jaw-dropping to see powerful American institutions not just permit themselves to be bullied, but join in the bullying themselves,” he said.

Last week, Delta, Coca-Cola and other companies spoke critically of the new law in Georgia and baseball announced it was moving the all-star game from the state.


McConnell warned companies not to get involved in voting issues or other upcoming debates on environmental policy or gun violence heading to Congress.