“I actually believe this is a great deal,” state Sen. Travis Hutson said. 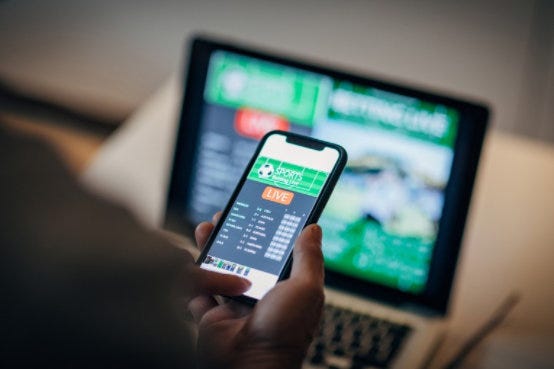 Wat’s legal to bet on in Florida, anyway? Answer: It’s complicated, and it keeps changing. Here’s what’s legal at the moment.

The Florida Senate approved a $2.5 billion compact Tuesday with the Seminole Tribe that would bring sports betting to the state, while the House also raced ahead with bills going along with the contentious gambling expansion.

The Senate overwhelmingly approved the new, 30-year compact signed last month by Gov. Ron DeSantis and the tribe in less than two hours of debate. The Republican-controlled Legislature is poised to finalize votes Wednesday and end this week’s special session, called solely to consider the deal.

The only wrinkle Tuesday was a House committee’s decision to “recouple” harness racing; that is, to continue requiring live racing to also offer other gambling. Live harness racing with standardbred horses is only at one track in Broward County, Pompano Park. Senators already voted to do away with the live racing requirement across the board.

Opponents speak out: Protesters rally at Capitol against gambling expansion on second day of special session

Although the compact amounts to what is likely the biggest expansion of gambling in Florida history, there was remarkably little pushback from senators. Only Sen. Jeff Brandes, R-St. Petersburg, voted against the deal, saying it was wrong to give the Seminole Tribe a monopoly over sports betting.

“Senators, today we’re putting all our eggs into one basket for $500 million this year. And maybe next year,” Brandes said of the compact, which guarantees $500 million for the state for each of its first five years and could net Florida more than $20 billion over the next three decades.

Before the session: Florida lawmakers kill added mobile gambling in deal between state and Seminole Tribe

But Sen. Travis Hutson, R-St. Augustine, who steered the package, defended it as worthwhile and pointed to the bounty of dollars that would pour into the state treasury for needed services.

Meantime, around 200 people gathered on the Historic Capitol steps to oppose the compact, having been brought in on buses from Miami, Jacksonville, Tampa and Orlando by the conservative Florida Family Policy Council. Only one lawmaker — GOP Rep. Mike Beltran of Valrico — spoke against the compact.

Deal, subject to lawsuits, still must be approved by feds after legislature

The compact must still win approval from the U.S. Interior Department, under the Indian Gaming Regulatory Act. And the expansion, along with accompanying changes to the state’s gambling landscape included in other bills approved Tuesday also are virtually guaranteed to be subject to lawsuits.

Among the potential hurdles is whether any expansion should be put before voters, under terms of a constitutional amendment approved in 2018 by 71% of Florida voters.

“This was our part, we do the legislative part,” said Senate President Wilton Simpson, R-Trilby. “If we were to pontificate on every possible outcome that lawyers believe could happen, or courts, we would never do anything. I think we’ve got a great product.”

Under the proposal, the Seminole Tribe would run the “sports book” for online betting in Florida, with horse- and dog-tracks and jai-alai frontons contracting with the tribe. The tracks and frontons would pull in 60% of the amount bet through their facilities, with the rest going to the tribe, under terms of the proposed compact.

The tribe has abandoned its longtime insistence that the state ban pari-mutuels from operating designated-player card games, which they say play too much like blackjack and violates their exclusive right to offer that game.

A standoff over these games killed earlier attempts to broker a compact, but now the kind of money expected from sports betting appears to have erased those concerns.

The compact making its way through the Legislature would replace one signed in 2010 by then-Republican Gov. Charlie Crist, now a Democratic member of Congress challenging DeSantis in next year’s governor’s race.

The tribe in 2019 stopped making roughly $350 million in annual payments to the state, after a federal court ruled Florida had violated the Seminoles’ exclusive right to offer banked card games, such as blackjack, by not stopping the designated-player games at pari-mutuel facilities.

What betting is currently legal in Florida? An explainer before the Florida Legislature debates changes

Later Tuesday, the House Select Committee on Gaming passed all of its legislation, including language saving harness racing, which puts the House in conflict with the Senate’s legislation. Bills also died Tuesday that would have regulated fantasy sports play.

“We’ll take up their bills tomorrow and we’ll see where it goes,” said House committee chair Randy Fine, a Palm Bay Republican, of the Senate’s legislation.

Sports betting to be offered at seven tribal casinos

A U.S. Supreme Court decision three years ago opened the door to sports betting beyond the limits of Nevada and with it, untold billions of dollars it could generate.

More than 20 states now offer some kind of sports betting. But to sidestep the voter-approved Amendment 3, requiring casino expansion to go before voters, DeSantis’ compact offer grants the Seminole Tribe the right to host sports betting at its seven casinos, and adding three more on tribal property in coming years.

The Seminole Tribe, a sovereign nation, is exempt from the requirements of Amendment 3. But John Sowinski, whose No Casinos organization spearheaded the constitutional amendment campaign, said the proposed compact allows Floridians to bet anywhere online – with the wagers processed on computer servers housed on Seminole property.

Sowinski said that approach would violate Amendment 3, which allows for gambling on tribal lands but not, he pointed out, on player’s cell phones far away from reservations.

Another bill that is part of the legislative package will establish a new Florida Gaming Control Commission, a five-member panel appointed by DeSantis, that will regulate gambling in the state – outside Seminole lands.

The $136,000-a-year commission post would be eligible to lawmakers – who Tuesday stripped out a provision that would have required them to wait at least two years after leaving office from being appointed.

Brandes, who criticized the entire package of bills in the Senate, derided the move, calling the commission post “a dream job for many legislators.”

One provision of the compact also drew controversy Tuesday for allowing current pari-mutuels to sell their permits to another facility – without violating the compact as long as the new location is at least 15 miles away from a tribal property.

The Trump National Doral resort in Miami-Dade County and the Fontainebleau Miami Beach are already being talked of as possible casino locations.

Fine, asked Tuesday, continued to insist that gambling license “portability” wasn’t in play: “We are not passing anything that would allow a (gambling) permit to move to Doral or the Fontainebleau or anywhere else … What the compact says is that if someone did that in the future, it would not violate the compact, but … that’s not in any of the bills” this week.

Under questioning from fellow senators, Hutson downplayed the possibility that such moves could be made quickly and easily. But he refused to go along with demands from Senate Democrats that his remarks be included in the Senate journal as a record in case of future lawsuits.

“We have stuff in here we talk about all the time, with legislative intent … they don’t have to have it in the journal,” Hutson said. A court “can ask us, depose us …they do it all the time.”


Lawmakers return Wednesday for what’s planned as the last day of the special session.

John Kennedy is a reporter in the USA TODAY Network’s Florida Capital Bureau. He can be reached at jkennedy2@gannett.com, or on Twitter at @JKennedyReport. Reach Jim Rosica at jrosica@tallahassee.com and follow him on Twitter @JimRosicaFL.

Want more news coverage? If you’re already a subscriber, thank you! If not, please subscribe using the link at the top of the page and help keep the news you care about coming. 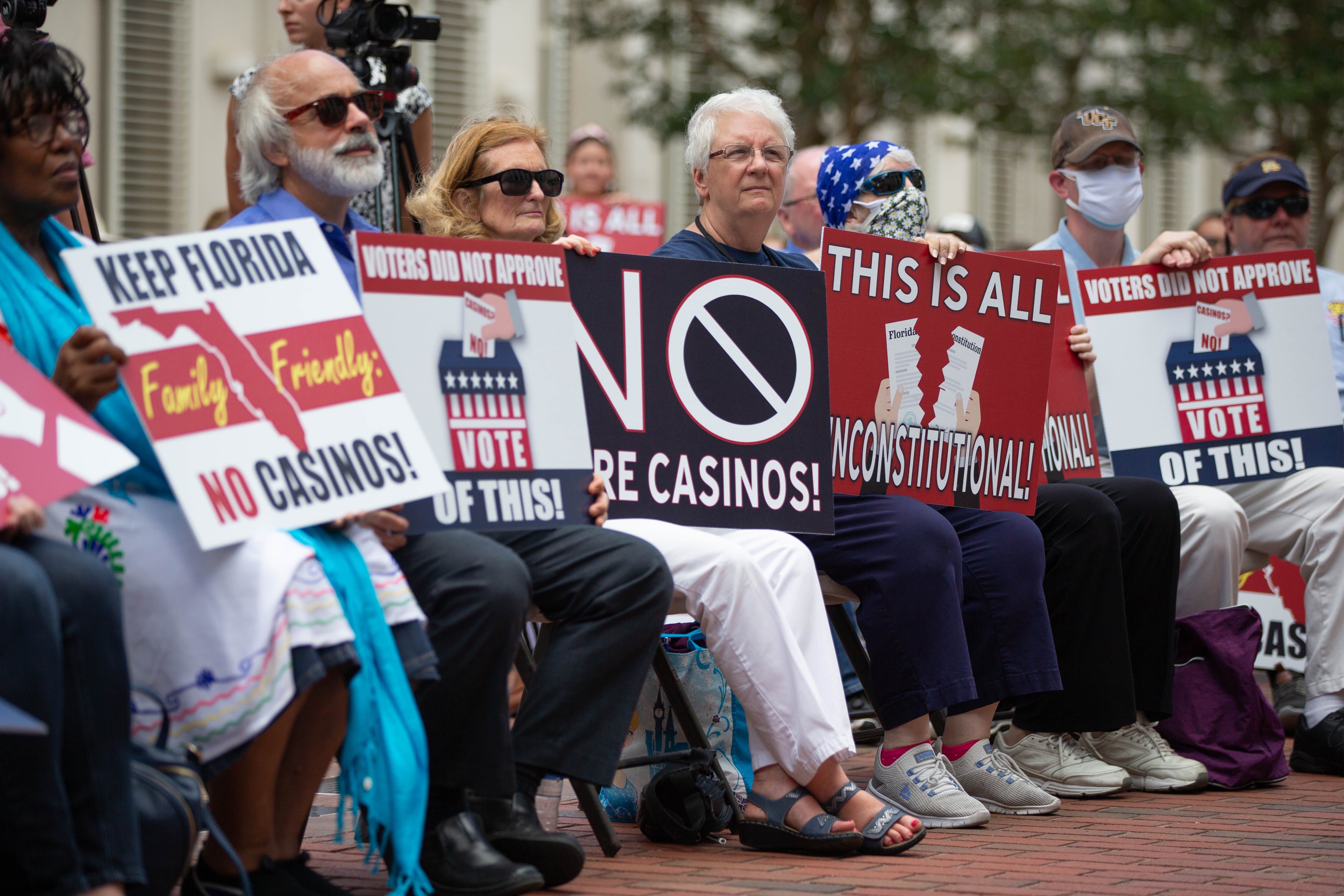 Will Trump be spoiler as California GOP seeks Newsom recall?

Wojo: Dan Campbell’s Lions in a spirited rush to find a pass rush