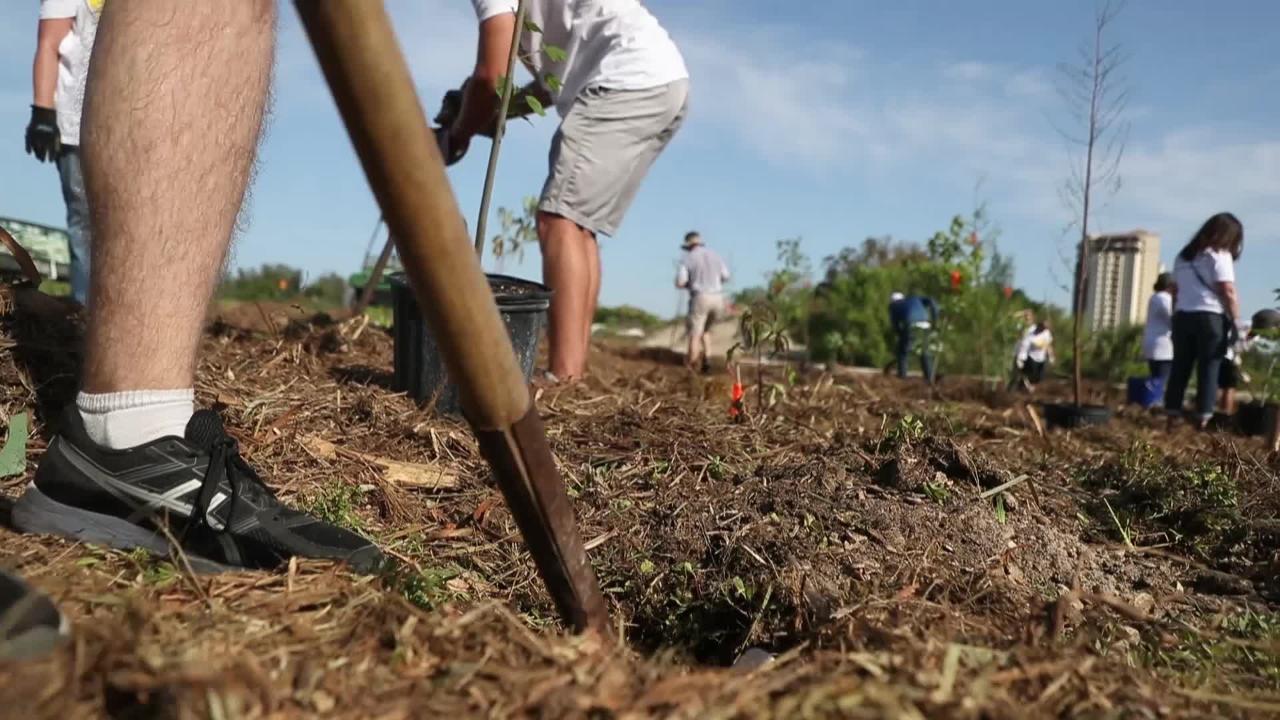 White and glossy ibis glide overhead as anhingas rest on sun-bleached Australian pine branches, their wings spread wide to dry in the sun.

One juvenile ibis — showing chocolate-colored marking on its feathers and underbelly — lands in a vast colony of wading birds on a small island in the western portion of Lake Park in south Fort Myers.

This former mining pit has flourished over the decades, but water quality issues have long plagued the park.

A filter marsh built on the eastern side of the park helped water quality there, but the western portion of the park is still suffering from excess nitrogen and algae blooms.

Lee County recently awarded a nearly $600,000 contract to Johnson Engineering for the design phase of a water quality project that will be built on the west end of the 279-acre park.

It’s expected to clear the waters of algae and to improve wildlife and fishery habitat. Once known for its large snook and clear waters, the lake today is murky to brown on the west end.

The Florida Department of Environmental Protection provided a $475,000 grant for the work, which is expected to take about a year.

Treating the water with alum is the idea, with a facility being planned for the western portion of the popular park and greenway.

The alum will bind to algae and excess nutrients and cause those to settle to the bottom, which will improve water clarity as well as water quality. Lakes Park drains into Hendry Creek and nearby Estero Bay, a state aquatic preserve.

It’s a technology that’s used across Florida and around the world to treat freshwater algae.

“The flow way to the east is successful because it’s a meandering flow way, but we’re still having issues with the western portion with algae blooms,” said Roland Ottolini, director of natural resources for Lee County. “And we’re addressing that with alum to get that algae to settle on the bottom.”

While a filter marsh was the answer to water quality issues on the east side of the park, the west side needed a different approach because a filter marsh is not possible there.

“This is really challenging because that western portion of the (park) gets very little circulation, so your typical means of filter marshes or other innovative technologies are not practical of efficient,” he said. “And (alum) is used around the world and throughout the state.”

More: Panther deaths up for first five months of 2021, season and growth partly to blame

The watershed includes developed areas along Summerlin Road and north of Lakes Park and feeds into Hendry Creek, which is listed as impaired by DEP for excess nitrogen.

This project will cut down on the amount of nutrients flowing to Hendry Creek and the northwest portion of Estero Bay.

“We should see a real improvement, especially with water clarity,” Ottolini said. “And when you get water clarity you get vegetation growth and with that you get better habitat for fish. This water quality improvement project will be really beneficial for recreational activities, and it will be clearer water so the fishery will be enhanced.”

Lakes Park has undergone a tremendous transformation in the past 60 years or so, growing from a mine pit beyond the edge of town, at that time, to one of the most popular parks in the area.

The campus-like park has miles of bikeways and boardwalks and is a treasured birding site.

Jim Beever, a retired biologist who helped design, permit and study the filter marshes across Southwest Florida, visited the mining pit lakes before the site was a park.

The area was basically borrow pits and invasive trees and plants.

“The first time I spent time in Lakes Park was before it became Lakes Park, but it was already finished mining and was overgrown with Australian pine,” Beever said. “It was the southern end of town, so it wasn’t in the boondocks. There certainly wasn’t any commercial or residential development.”

By the time the mining operation was complete in the 1970s, the footprint of what is now the lake was nearly 160 acres in size.

Lee County bought the property in 1982 and held a groundbreaking to open the park on April 21, 1984, according to county records.

Lakes Park even had a swimming beach at one point, but it was close down due to bacteria outbreaks.

The county says there are no plans to reopen the beach to swimming.

“If you look at the water quality data, it improved,” Beever said. “And then it started declining again because there was more impervious surface and more fertilizer for golf courses for lawns and other pollutants.”

He attributes today’s improved water quality on the eastern side of the park to the 2012-13 filter marsh built by the county.

That project is 40 acres and helped improve water conditions by enhancing oxygen and by cleaning the water that flows there.

Located on the east side of the park, the filter marsh is exactly what it’s name suggests: a man-made marsh that filters pollutants from the water.

“It made use of some of the areas of mining but we reconfigured it so it would be a series of step down cells, where you collect water and it runs over emergent vegetation,” Beever explained. “And at each step the water gets better and better until it goes into the weir to Hendry Creek.”

Water in the lake comes from groundwater inflows, surface water runoff and rainfall, and the depth varies from a few inches to more than 20 feet, according to county records.

What’s water quality in the Lakes Park-Hendry Creek area going to look like in 20 or 40 years?

“It’s going to continue to degrade (downstream of the park) unless we increase the standards with regard to water management,” Beever said. “Not just Lakes Park, but all those developments should have filter marshes. (But) I think it would be fair to say it is better than the ‘70s  or ‘80s, and it’s improved with the filter marsh.”

Jesse Lavender, Lee County’s parks and recreation director, spent much of his childhood at Lakes Park as his father was an earlier supervisor, and his mother worked for the same department.


“I basically grew up in this park,” Lavender said. “I was hanging out with my friends there and my dad worked there so it was a good place to spend a lot of time.”

Lavender has watched the park over the decades as it’s transformed from decade to decade.

“I remember it during Hurricane Charley (2004) and back when you used to be able to swim in the lake and the lifeguards,” Lavender said. “There was a tremendous amount of large snook. And it seems like everything we’re doing now is going to bring it back to that.”