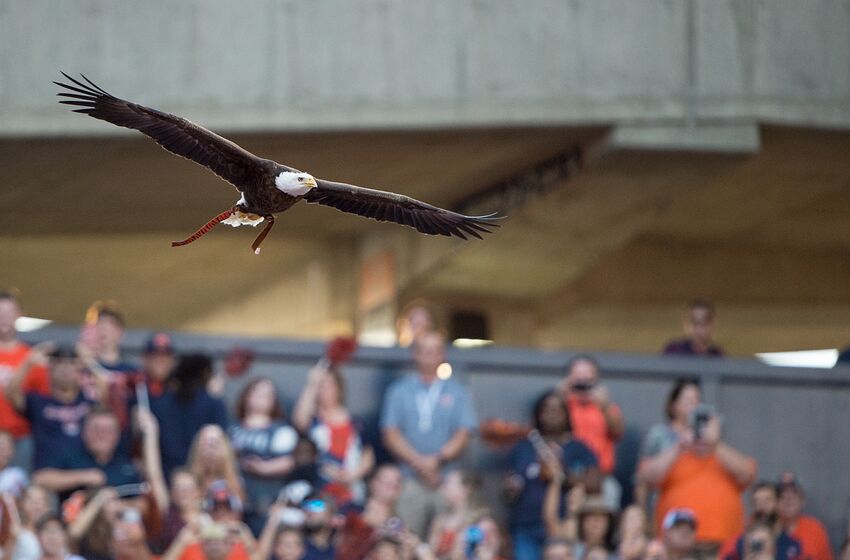 One of the greatest traditions in sports: Auburn’s eagle, Spirit, takes flight before the Alabama State game. (Photo by Michael Chang/Getty Images)

Auburn baseball advances to the Chapel Hill Super Regional after sweeping Coastal Carolina and Georgia Tech in the Atlanta Regional. For the first time in program history the Tigers have won back-to-back regional titles.

Jack Owen opened Friday afternoon’s game for Auburn by throwing 12 pitches against Coastal Carolina’s Cory Wood before Wood finally grounded out to second. It was a crazy start to what would be a crazy, record breaking game for the Tigers. When Owen came off the mound in the middle of the fourth inning he had thrown 86 pitches and the game was tied 2-2. In the next 4 innings Auburn scored 14 more runs. No that is not a typo, the Tigers put on an absolute clinic scoring the most runs in a regional since 2010.

The Tigers would then have to face off against Atlanta regional host Georgia Tech on their home turf. Going into Saturday’s game the Tigers were 0-2 in the regular season against the Yellow Jackets and up until the final out in the bottom of the ninth it would have appeared the Yellow Jackets were about to make it 0-3.

Auburn was down to their last out with Will Holland on second base and Rankin Woley on first when Steven Williams came up to bat. The Tigers were down 5-3 and were in dire need of a huge play. Staring down an 0-2 count Williams stole the game by sending a bomb out of right field.

The Tigers would have to face off against the Yellow Jackets again Sunday afternoon. Auburn faithful in Atlanta deserve a medal for surviving this one. The game went scoreless for 5 innings and was delayed in the middle of the fourth due to weather. The delay lasted 2 hours and even had the Auburn softball account questioning James Spann on Twitter.

When mother nature finally calmed down and play resumed momentum for both teams was desperately needed. The game continued to go scoreless until the Tigers picked up 3 runs in the top of the sixth, but it wasn’t until Judd Ward auditioned for the roles of Auburn quarterback and wide receiver that the crowd went absolutely nuts.

Ward’s arm kept the game in control for the Tigers while hot hitting helped them win the game. Auburn advances to the Chapel Hill Super Regional where they will square off against North Carolina for a chance to advance to Omaha.

Auburn vs North Carolina in a final 16 match up? We like the sound of that. Emmett Till investigation closed by feds; no new charges