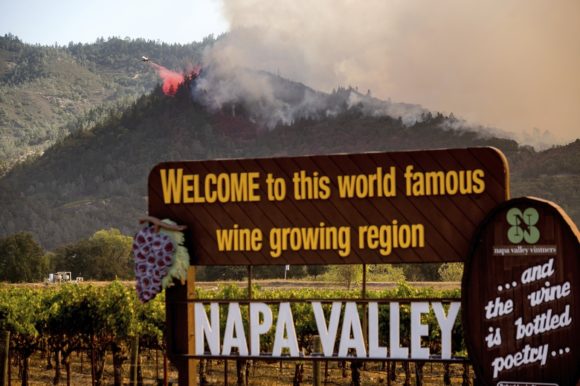 SAN FRANCISCO — Harvest season in Northern California’s wine country is what dream weddings are made of: ripe grapevines and golden sunsets provide ceremonies an alluring backdrop that every year draws millions of visitors.

But harvest season now overlaps with fire season as wildfires, too, have become a yearly reality in the region.

In three of the past four years, major wildfires driven by a changing climate have devastated parts of the world-famous region, leaving little doubt that it’s vulnerable to smoke, flames and blackouts in the fall.

Last month, firefighters were still mopping up a blaze that took a disastrous toll in Napa Valley when the region was put on edge again by hot, dry and windy weather. Thousands were without power when Pacific Gas & Electric utility cut off service to prevent the winds from downing lines and sparking another inferno.

After seeing news images of burning wineries and people fleeing their homes, Ash Mintern decided to postpone a romantic getaway to wine country from Tampa, Florida to propose to his girlfriend.

“When I saw that people were evacuating out of the area, I didn’t want to take a risk,” Mintern said.

With visitors like Mintern second-guessing their plans to visit the region, locals dependent on the tourist economy are rethinking their marketing plans.

“If the fires make major news every year, it’s going to keep people from wanting to make long-term plans to vacation here,” said Bob McClenahan, a photographer who lost all his wedding gigs this year.

The coronavirus pandemic was already hurting Napa and Sonoma counties’ hospitality industry by halting wine tastings and large gatherings of any kind.

Closed wineries quickly pivoted to hosting virtual tastings and promoting wine clubs. The region started to slowly recover in late spring when restaurants and wineries reopened to outdoor drinking and dining. But in August, a series of lightning storms sparked wildfires west of Sonoma County and east of Napa, blanketing the region in thick smoke.

Then on Sept. 27, a small fire that began near the town of St. Helena was quickly pushed by winds across Napa Valley’s verdant hills, burning down to the valley floor and consuming hundreds of homes before making its way to Sonoma County.

The two fires followed devastating wildfires last year and in 2017.

Lost or damaged in the blaze were some of the area’s most iconic names: Meadowood, the Michelin-starred restaurant famous for its garden-to-table cuisine, was leveled except for its staircase and fireplaces. The flames devoured a farmhouse behind Castello di Amorosa, a winery that resembles a medieval castle, and destroyed more than 100,000 bottles of wines.

“I’ve been in the wine business for 48 years and this is by far the most catastrophic, devastating, most horrible year,” said Amorosa’s owner Dario Sattui.

Still, the majority of vineyards, winemaking facilities and tasting rooms that attract wine lovers to Northern California have escaped damage, but the perception of the area in flames threatens business across the region.

That has led state tourism officials to fund a study looking at how the threat of fires affects consumer perception and behavior. Some are refashioning the spring as their peak season.

“When people see these dramatic pictures of wineries burning, they imagine that an entire region is destroyed and in ashes,” said David Pearson, manager of the luxury Meadowood resort, whose owners plan to rebuild what was burned by the fire.

Scientists say warmer temperatures and a lack of rain are leaving plants and trees more flammable, creating the conditions for wildfires to grow quickly and burn with more intensity. California’s fire season has been starting earlier and ending later. This year’s unprecedented season began with the lightning siege. So far, about 9,000 wildfires scorched a record 4.1 million acres (16,970 square kilometers). More than 10,000 structures have been destroyed or damaged, and there have been 31 fire-related fatalities.

While it’s too soon to quantify the 2020 wildfires’ long-term effects, the study will try to assess whether they’ve shaped people’s decision to visit the state, said Caroline Beteta, president and CEO of Visit California. The nonprofit will select a research partner in the coming weeks.

“Wildfires have long been a fact of life in the American West,” she said. “While fires may be worrisome, they do not cancel everything California has to offer its residents and visitors.”

For now, strong hotel occupancy rates after previous fires suggest tourism will bounce back. Two luxury hotel chains are opening in the region, while several others are seeking permits to develop resorts.

But tourism officials in Napa and Sonoma counties recognize the fall has become an unreliable time to visit, so they’ve launched campaigns to encourage visitors from far away to plan for the winter or spring when wildflowers are in bloom and the pace is slower.

Online, Visit Napa Valley is promoting Cabernet season, which spans November to April, “when crowds have diminished and the bustle of the harvest is behind us.”

Meanwhile, in the fall, Sonoma County Tourism wants to focus “on the drive market” or people who can make last-minute plans because they live nearby, president Claudia Vecchio said.

Some wedding planners said they expect to see shorter wedding seasons, with more in the spring.

“Rain is easier to deal with than fire,” said Janice E. Twomey, who had nearly a dozen weddings postponed or canceled this year.

She said couples from as far as Europe have asked her to plan their weddings for next year, a sign that the ceremonies endure fires and pandemics.

“Napa remains beautiful, the wineries are open again and people are here,” said Pearson, the manager at Meadowood resort. “The best way people can support us is to come visit, drink the wine and have a lovely time. Just be sure to call ahead.”

About the photo: In this Sept. 27, 2020, file photo, an air tanker drops retardant on the Glass Fire burning in Calistoga, Calif. Harvest season in Northern California’s wine country draws millions of visitors each year. But harvest season now overlaps with fire season as wildfires, too, have become a yearly reality in the region. In three of the past four years, major wildfires driven by changing climate have devastated parts of the world-class region, leaving little doubt that it’s vulnerable to smoke, flames and blackouts during the fall. (AP Photo/Noah Berger, File)