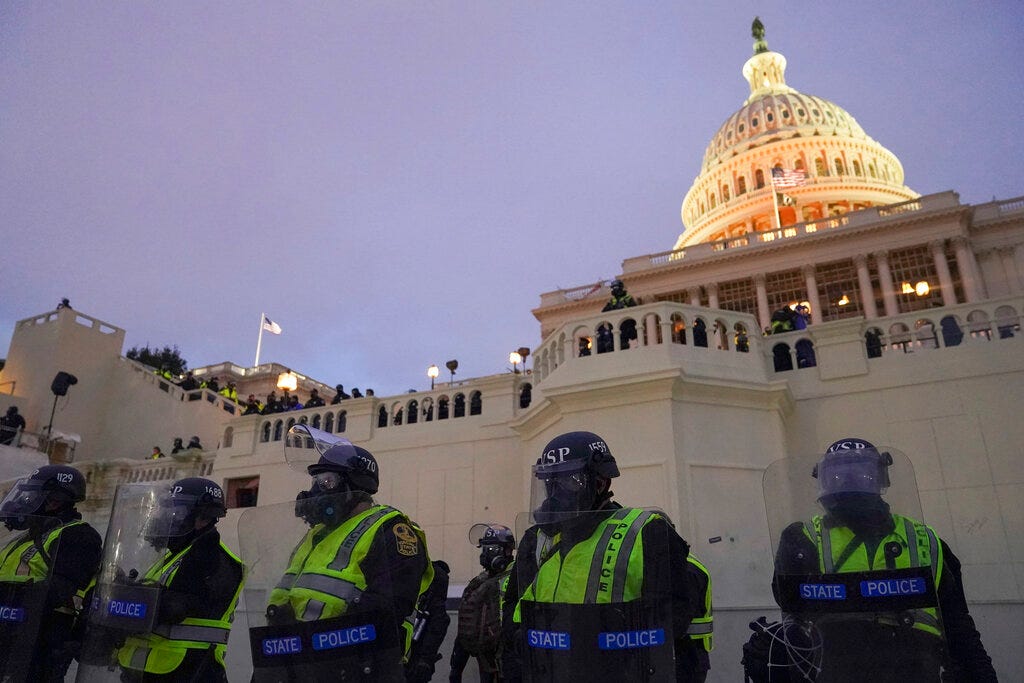 Washington – The top watchdog for the U.S. Capitol Police will tell a House committee on Thursday that there is a need for a culture change within the force after broad failures in its response to the Jan. 6 insurrection, including missed intelligence predicting a “war” and weapons that were so old that officers didn’t feel comfortable using them.

Capitol Police Inspector General Michael A. Bolton has investigated the force’s missteps since the siege, when hundreds of President Donald Trump’s supporters broke into the building and sent lawmakers fleeing for their lives. In a 104-page report obtained by The Associated Press, he paints a dire picture of his agency’s ability to respond to future threats and casts serious doubt on whether the force would be able to respond to another large-scale attack.

In prepared remarks, Bolton says the Capitol Police needs to improve its intelligence gathering, training, and operational planning. There also needs to be a change in the way that the force views its own mission, he says.

“In regards to culture change, we see that the Department needs to move away from the thought process as a traditional Police Department and move to the posture as a Protective Agency,” Bolton writes in the remarks. “A police department is a reactive force. A crime is committed; police respond and make an arrest. Whereas, a Protective Agency is postured to being proactive to prevent events such as January 6th.”

The Capitol Police have so far refused to publicly release the report – prepared in March and marked as “law enforcement sensitive” – despite congressional pressure. Democratic Rep. Zoe Lofgren of California, who heads the House Administration Committee, said last month that she found the report, along with another so-called “flash report” the department had circulated internally, “detailed and disturbing.” Lofgren’s committee is holding Thursday’s hearing.

Bolton found that the department’s deficiencies were – and remain – widespread: Equipment was old and stored badly; officers didn’t complete required training; and there was a lack of direction at the Civil Disturbance Unit, which exists to ensure that legislative functions of Congress are not disrupted by civil unrest or protest activity. That was exactly what happened on Jan. 6 when Trump supporters violently pushed past police and broke into the Capitol as Congress counted the Electoral College votes that certified Joe Biden’s victory.

The report also focuses on several pieces of missed intelligence, including the force’s own inconsistent information gathering and an FBI memo sent the day before the insurrection that then-Capitol Police Chief Steven Sund has told lawmakers he never saw. That memo, which is included in the report’s appendix, warned of threatening online postings by Trump backers, including one comment that Congress “needs to hear glass breaking, doors being kicked in” and blood being spilled.

“Get violent … Stop calling this a march, or rally, or a protest,” read the post recounted in the memo. “Go there ready for war. We get our President or we die. NOTHING else will achieve this goal.”

A separate report prepared by the Department of Homeland Security in December alerted the police to an online posting that included a map of tunnels under the Capitol used by lawmakers and staff, the document says.

The Capitol Police said in a statement Wednesday that officials had already made some of the improvements recommended by Bolton, and that the siege was “a pivotal moment” in history that showed the need for “major changes” in how the department operates. Still, they said that they would need more money and staff to make improvements.

“It is important to note that nearly all of the recommendations require significant resources the department does not have,” the statement said.

House lawmakers are hoping to provide more resources to the force in spending legislation that could be proposed as soon as this month. House Speaker Nancy Pelosi said Thursday that the money would not only go to “hardening” the Capitol’s windows and doors but also to hiring and training officers.

The riot has pushed the Capitol Police force toward a state of crisis, with officers working extra shifts and forced overtime to protect the Capitol. The acting chief, Yogananda Pittman, received a vote of no confidence from the union in February, reflecting widespread distrust among the rank and file who were left exposed and injured as the violent mob descended on the building. Morale has plummeted.

The entire force is also grieving the deaths of three of their own. Officer Brian Sicknick collapsed and died after engaging with protesters on Jan. 6. Officer William “Billy” Evans was killed April 2 when he was hit by a car that rammed into a barricade outside the Senate. A third officer, Howard Liebengood, died by suicide in the days after the insurrection.

The report describes in detail how department equipment was substandard, including at least 11 different types of munitions that appeared to have expired. Some equipment hadn’t been replaced in more than two decades. Riot shields that shattered upon impact as the officers fended off the violent mob had been improperly stored. Weapons that could have fired tear gas were so old that officers didn’t feel comfortable using them. Other weapons that could have done more to disperse the crowd were never staged before a Trump rally held near the White House, and those who were ordered to get backup supplies to the front lines could not make it through the aggressive crowd.

In other cases, weapons weren’t used because of “orders from leadership,” the document says. Those weapons – called “less lethal” because they are designed to disperse rather than kill – could have helped the police repel the rioters as they moved toward the Capitol after Trump’s speech, according to the report.

A timeline attached to the report also gives a more detailed look at Capitol Police movements, commands and conversations as the chaos unfolded. It recounts several instances in which police and SWAT teams rescued individual lawmakers trapped in the Capitol and sheds new light on conversations in which Sund begged for National Guard support. The document quotes Army Staff Secretary Walter Piatt saying didn’t like the “optics” of the National Guard at the Capitol and would recommend not sending them at 2:26 p.m., after the rioters had already smashed in.

The Pentagon eventually did approve the Guard’s presence, and Guard members arrived after 5 p.m. While they were waiting, Sund also had a teleconference with Vice President Mike Pence, the timeline shows. Pence was in a secure location in the Capitol because he had overseen the counting of the electoral votes. Some rioters were calling for his hanging because he refused to try and overturn Biden’s win.

The AP reported on Saturday that Pence also had a conversation that day with the acting defense secretary, Christopher Miller, in which Pence demanded, “Clear the Capitol.”