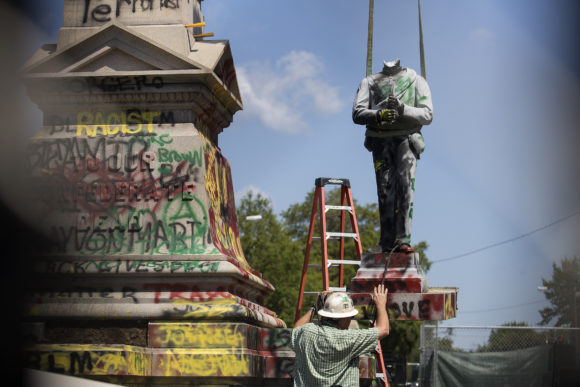 PORTSMOUTH, Va. — A judge in Virginia dismissed charges on Monday that were filed against a prominent Black state senator after police said that she and others conspired to damage a Confederate monument in the city of Portsmouth.

The Virginian-Pilot reports the charges against state Sen. Louise Lucas were dismissed at the request of the city’s top prosecutor, who said the elements of the charges were not properly met.

Portsmouth’s police department charged Lucas and several others in August with conspiracy to commit a felony and injury to a monument in excess of $1,000. The charges stemmed from a protest in June that drew hundreds of people to the city’s Confederate monument. Heads were ripped off some of the monument’s statues while one was pulled down, critically injuring a demonstrator.

The police department had filed the charges without the cooperation of the city’s prosecutor. And Lucas’s allies viewed the case as shamelessly political. The Democrat is the state Senate’s President Pro Tempore. She was charged in a warrant the day before state lawmakers met to work on various police reforms, including ones Lucas championed.

Legal observers also questioned the strength of the case because it was based on Lucas’s words, not her actions. The senator’s attorney, Don Scott, had said she left the scene hours before the statue was torn down.

Portsmouth is a majority Black city of nearly 100,000 people. The damage to the memorial and the protester’s injuries prompted blame against protesters and police alike. Lucas had called for the resignation of Portsmouth’s police chief, Angela Greene, who is also Black.

The dismissed case is only the latest fallout stemming from the June protest. Shortly before the judge’s decision Monday, Portsmouth’s police chief said she had been fired and planned to sue for wrongful termination.

“I believe I was wrongfully terminated for upholding the law,” Greene said Monday at a news conference.

Greene had said in August that “several individuals conspired and organized to destroy the monument as well as summon hundreds of people to join in felonious acts.”

Charging documents filed by police said Lucas arrived at the monument June 10 and told police they could not arrest anyone who put paint on the memorial.

Police said the 76-year-old approached officers with a warning: “(T)hey are going to put some paint on this thing, and y’all can’t arrest them.”

“(T)hey gonna do it, and you can’t stop them … they got a right, go ahead!,” police claim Lucas said.

Police “informed Senator Lucas that she could not tell people they can do that,” the filing said. “Lucas replied, `I’m not telling them to do anything, I’m telling you, you can’t arrest them.”’

William & Mary law professor Timothy Zick told The Associated Press in August that he questioned the strength of the case. He pointed to two phrases in the probable cause: “Go ahead” as well as “I’m not telling them to do anything, I’m telling you, you can’t arrest them.”

Speech that calls for an unlawful action is protected unless it is “directed to inciting an imminent violation and that violation is likely to occur,” Zick said.

“If those are the facts, then the senator’s speech would likely be protected,” Zick wrote in an email in August.

About the photo: Crews work to take down a Confederate monument, Wednesday, Aug. 26, 2020, in Portsmouth, Va. (Kaitlin McKeown/The Virginian-Pilot via AP)