Durham, N.C. — The owner of a Durham health services business woke to heavy rain on Saturday and knew she’d have a cleanup task ahead.

Dagmar Ehling, of Oriental Health Solutions, said the building where she practices with five acupuncturists and one physician, at 907 Broad St., had a flood in 2011 and flooded three times in 2018.

Practitioners and patients moved back into the renovated downstairs as 2019 began, but now, Ehling says, they may never return.

The property’s history of floods prompted owner Mark Burnett to do flood-proofing, including the installation of a flood door.

“We hoped it would hold, but it did not,” Ehling said.

Burnett had also installed surveillance cameras to monitor the parking lot. It was on that feed, Ehling said, that she saw that water had risen to two feet high outside.

“When I came in we had 4 inches of water, and everything was just wasted,” she said.

Now they face another cleanup and an uncertain future.

“There’s really no point in moving back downstairs unless the city or somebody does something, and I don’t expect anyone to do anything,” she said. 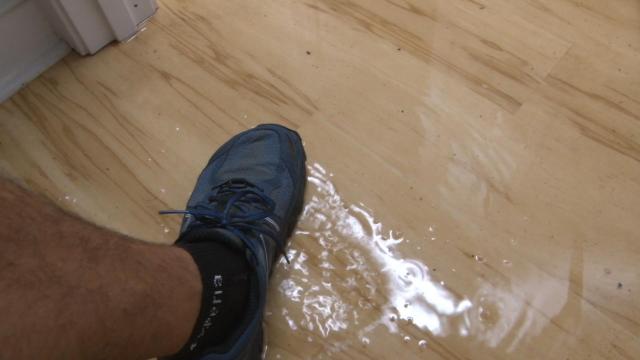 “This is a horrific situation. Our patients expect us to have a warm, homey space that they feel safe in, and it’s not that,” she said.

Burnett said he’s invested in flood mediation and sought help from the city.

“I don’t understand why it’s nobody’s problem but me,” he said.

While Ehling, Burnett and others spent Saturday afternoon moving electronics and soggy carpets, more rain was falling. And there is rain in the forecast through the next seven days.