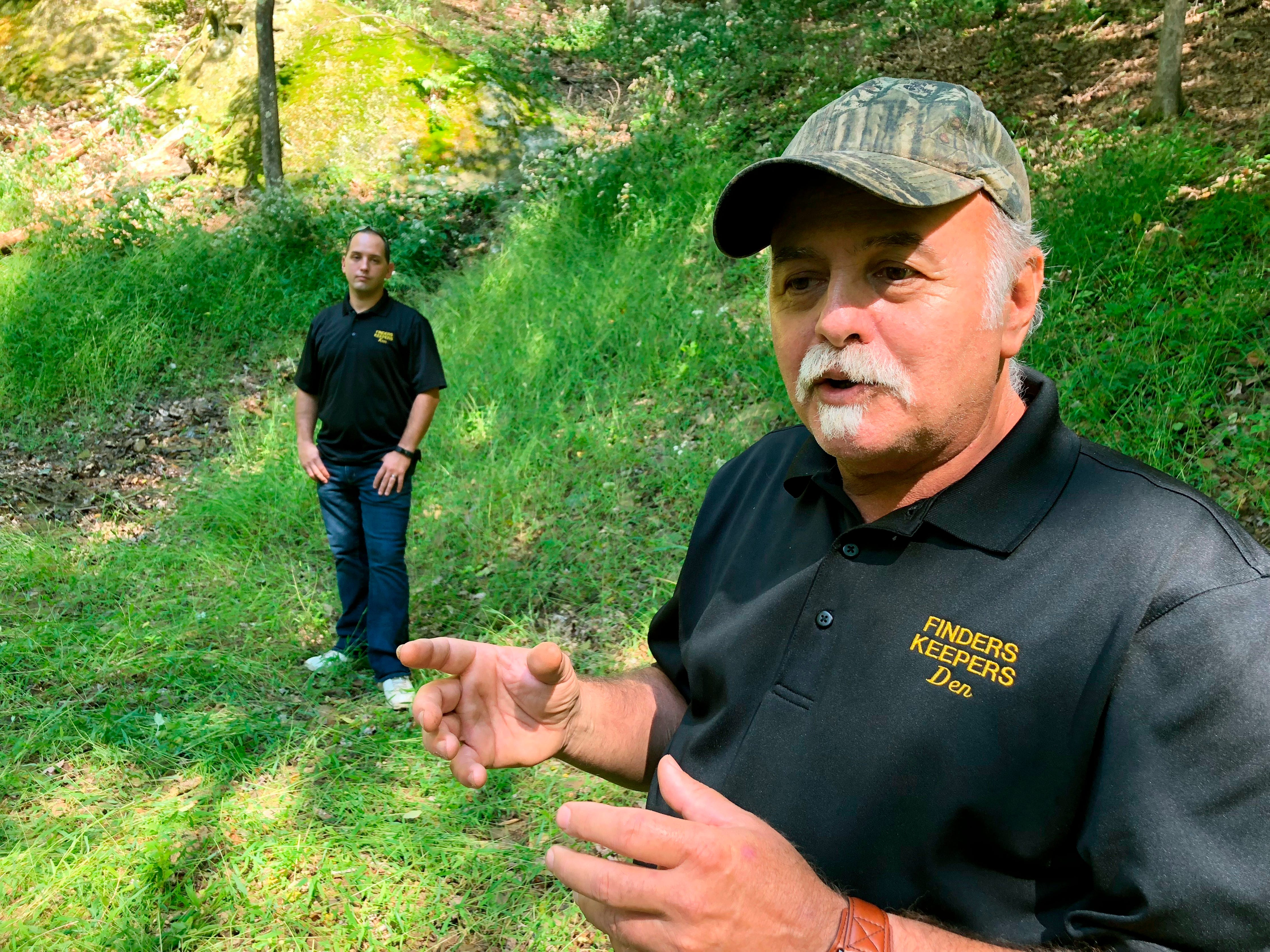 Go for the gold? The U.S. government went for it.

FBI agents were looking for an extremely valuable cache of fabled Civil War-era gold – possibly tons of it – when they excavated a remote woodland site in Pennsylvania three years ago this month, according to government emails and other recently released documents in the case.

On March 13, 2018, treasure hunters led the FBI to Dent’s Run, about 135 miles (220 kilometers) northeast of Pittsburgh, where legend has it an 1863 shipment of Union gold was either lost or stolen on its way to the U.S. Mint in Philadelphia.

The FBI has long refused to confirm why exactly it went digging, saying only in written statements over the years that agents were there for a court-authorized excavation of “what evidence suggested may have been a cultural heritage site.”

In any event, the FBI says, the dig came up empty.

But the father-son duo who brought a small army of federal agents to the site remain convinced the FBI uncovered something there – and their lawyer, Bill Cluck, is still pressing the case, successfully suing for access to government emails about the dig.

Those documents, which Cluck provided to The Associated Press, show that federal law enforcement was indeed after buried treasure.

“We believe the cache itself is in the neighborhood of 3x5x8 (feet) to 5x5x8,” wrote K.T. Newton, an assistant U.S attorney in Philadelphia, in a 2018 email marked “Confidential.”

Since the Elk County site was on state-owned land, the FBI had to secure a federal court order to gain access. The legal maneuvering generated emails between Newton and Audrey Miner, chief lawyer for the Pennsylvania Department of Conservation and Natural Resources.

On March 13, as FBI agents clambered up a hill to the target, Miner bluntly asked Newton: “Can you please provide the basis upon which the Office of the United States Attorney asserts that the gold, if found, belongs to the federal government?”

Newton replied that a federal affidavit in the case was sealed. She instead offered to “discuss this generally with you on the phone,” according to email records released by the state under court order.

The federal government followed a well-worn path to the woods of northwestern Pennsylvania, where legendary tales of buried Civil War gold had inspired generations of treasure hunters – including Dennis and Kem Parada.

The Paradas, who co-own the treasure-hunting outfit Finders Keepers, had spent years looking for the long-lost booty before going to the FBI with their evidence in January 2018, saying their sophisticated detector had registered a hunk of metal they suspected was the gold of lore.

Within weeks, the FBI hired geophysical consulting firm Enviroscan to survey the hilltop site. Enviroscan’s gravimeter also indicated a large metallic mass with the density of gold, according to Warren Getler, who worked closely with the Paradas and the FBI.

An FBI agent told them the location of the mass was “one or two feet off Denny’s sweet spot,” recalled Getler, author of “Rebel Gold,” a book exploring the possibility of buried Civil War-era caches of gold and silver. “Then I went to ask how big is it. And he said, ‘7 to 9 tons.’ And I literally said, ‘You’ve got to be kidding!’”

That much gold would be worth hundreds of millions of dollars today – and, assuming it was there, would almost certainly touch off a legal fight over how to divvy up the spoils.

Enviroscan co-founder Timothy Bechtel declined comment to the AP about what his instruments detected, citing client confidentiality. Bechtel said the FBI has asked him to keep quiet about his findings.

John Louie, a geophysics professor at the University of Nevada, Reno, unconnected to the dig, said the gravimeter is a powerful tool that can yield important clues about what’s underground.

“But it doesn’t prove it,” he said. “It doesn’t make any elemental analysis. It’s indicative, it’s suggestive, but it can’t prove it.”

To prove it, the FBI needed to dig.

The Paradas and Getler have previously said they had an agreement with the FBI to watch the excavation. Officers instead confined them to their car for most of the dig, then, at the end of the second and final day, escorted them to the site – by that time a large, empty hole.

The FBI has long been adamant that whatever the agents were looking for, they didn’t find it.

“The FBI unequivocally rejects any claims or speculation to the contrary,” a spokesperson said last week.

On March 16, 2018, two days after the dig ended, Newton emailed Miner that “we are all disappointed and scratching our heads over the several scientific test results.”

It’s unclear what she meant, but the U.S. Attorney’s Office in Philadelphia said last week it considers the matter to be closed.

The dig drew plenty of media attention at the time. On March 28, Miner asked Newton for an update on the federal investigation, telling her “the gold story still has legs, and the DCNR is now getting a lot of ‘gold-diggers’ interested in Dent’s Run.”

In her reply, Newton told Miner: “For your knowledge only … we have no other scientific evidence, other than what the excavation had been based on, that any gold is hidden in that area.”

Miner emailed back: “I guess you can’t come right out and state there is no gold to be found at Dent’s Run?”

“Unfortunately, we cannot,” the prosecutor replied.

Three years later, the Dent’s Run story is not likely to go away, government denials notwithstanding. The Paradas and Getler are planning a news conference on Wednesday to keep the spotlight on their claims. Residents have told of hearing a backhoe and jackhammer overnight – when the excavation was supposed to have been paused – and seeing a convoy of FBI vehicles, including large armored trucks.

“I gotta find out what happened to all that gold,” Dennis Parada said in a phone interview last week.

The FBI assertion of an empty hole is “insulting all the credible people who did this kind of work,” he said. “It was a slap in the face, really, to think all these people could make that kind of mistake.”

Cluck, meanwhile, is still pursuing government material on the case – nearly 2,400 pages, as well as video files, that the FBI has promised to turn over in response to his Freedom of Information Act request.


All documents in the federal court case about the dig remain sealed. For that reason, a state appeals judge recently declined to order the Department of Conservation and Natural Resources to give Cluck the federal writ of entry and seizure warrant that the FBI agents relied on to gain access to the site.

In rejecting Cluck’s petition, though, state Commonwealth Court Judge Kevin Brobson left a tantalizing clue. In a footnote of his Jan. 28 opinion, Brobson revealed, for the first time, the name of the sealed federal case:

“In the Matter of: Seizure of One or More Tons of United States Gold.”