Andrea Stetson
|  Special to The News-Press 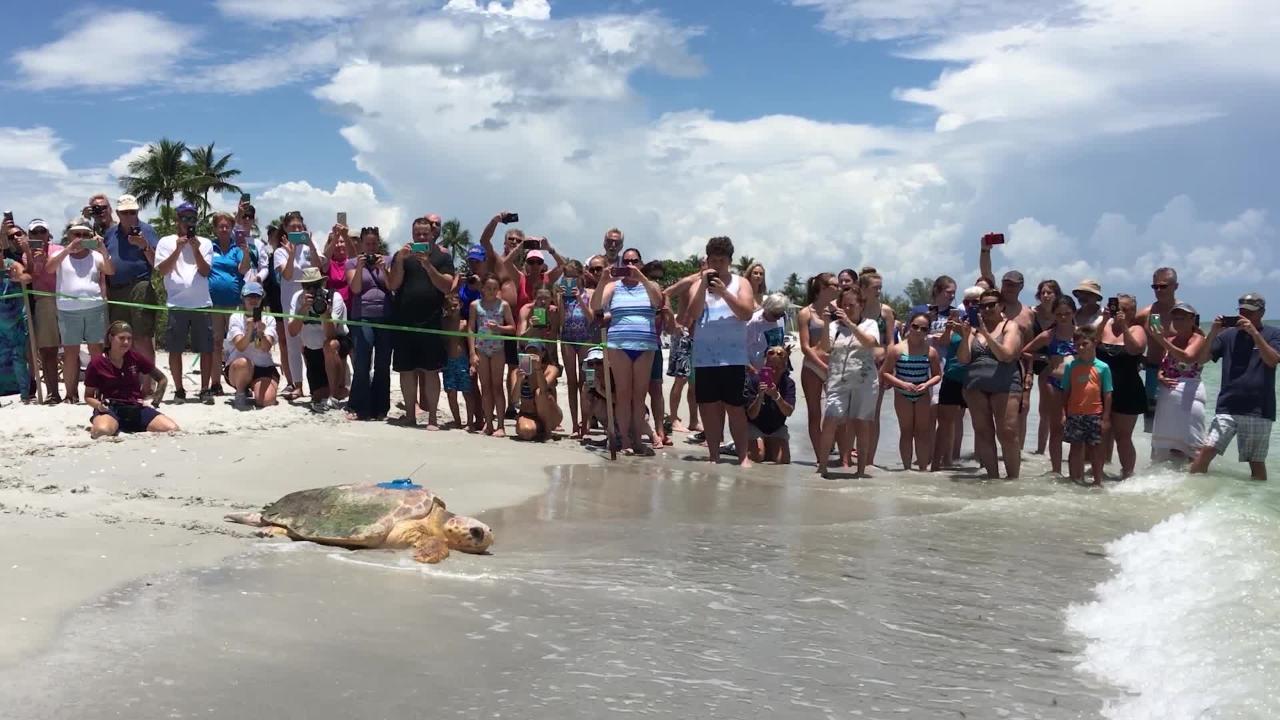 A male loggerhead sea turtle was released on Sanibel after being treated at CROW for red tide poisoning.

Sea turtle season brought mixed results in Southwest Florida this year: in some places nesting was up, but hatchings were down.

The little ones may have been helped by the pandemic because rentals were shut down for a time on some beaches. But storms later in the season could have hurt success rates.

Also, the turtles were moving north this year. While Bonita Beach had a lower number of nests, Fort Myers Beach broke all records with 132 loggerhead turtle nests.

“It does not mean there are more turtles,” said Eve Haverfield, president and founder of Turtle Time, a non-profit volunteer organization that monitors sea turtles in south Lee County. “This year there aren’t more turtles; there is a shift. What stood out so much was the shift from Bonita to Fort Myers Beach. It was very eye catching.”

Turtle nesting season runs from May 1 to Oct. 31. Many loggerheads lay nests every other year, so Haverfield compares the 2020 numbers to the ones in 2018. For the four beaches she monitors: Bonita Beach, Fort Myers Beach, Big Hickory Island and Bunche Beach, there were 297 nests in 2018 and 295 in 2020. That is very close in numbers.

Haverfield said there may be a reason the turtles were finding Fort Myers Beach more attractive this year.

“It’s conjecture,” Haverfield stressed. “In Fort Myers Beach no one was let out on the beach. That is what stood out as being very different than in years past. The one huge outstanding variable was that one beach was closed and the other wasn’t. We will know next year and the year after if the trend continues. Ideally we would like to go back to the high numbers in Bonita that we had last year and keep the numbers we had on Fort Myers Beach this year.”

Haverfield would like to see high numbers back in Bonita because that beach has a better success rate. Bonita Beach has a greater slope that allows water from storms to move away quickly.

Two nests on Bonita were washed away by storms. Seven were lost on Fort Myers Beach. Tropical Storm Cristobal in the spring and Hurricane Laura later in the season brought large waves crashing on the sand.

Haverfield said another interesting fact about this season is that Fort Myers Beach had five nests in April before the official start of nesting season.

“It is always an exciting year,” she said. “It would be wonderful if Fort Myers Beach would continue this upward trend and Bonita Beach went back to its upward trend.”

Sanibel and Captiva islands had a very exciting year. Captiva had two leatherback nests and Sanibel had four. Experts believe they were all laid by the same turtle that they named Juniper. The leatherback, the largest species of sea turtle, was estimated to be about 1,000 pounds. Loggerheads average about 350 pounds.

“It was very exciting,” said Kelly Sloan, coastal wildlife director for the Sanibel/Captiva Conservation Foundation. “It was the highlight of our season.”

Juniper can be tracked by going to Trackturtles.com/juniper

The year was also great for loggerheads on the islands.

“It was a record year on both beaches,” Sloan said.

Captiva had 266 loggerhead nests, the highest in their records. The west end of Sanibel had 509 nests while the east end had 151. Sanibel also had five green turtle nests.

While nest numbers were high, success rates weren’t. Only 33 percent of the nests on Captiva hatched and 58.2 percent hatched on the east end of Sanibel and 40.9 percent had success on the west end.

“We had a pretty low hatch rate this year,” Sloan said sadly.

Collier County had 1,618 nests which is higher than 2018 but lower than last year.

The City of Naples and Vanderbilt Beach had a lot of nests, but numbers were down on Barefoot Beach and Parkshore.

“We had that Tropical Storm Cristobal that damaged a lot of nests,” said Maura Kraus, Principal Environmental Specialist for Collier County. “Then we had a good middle of the season and then at the end of the season we had (storms) Laura and Sally. We probably did pretty good, but we won’t know until we are done analyzing all the data.”