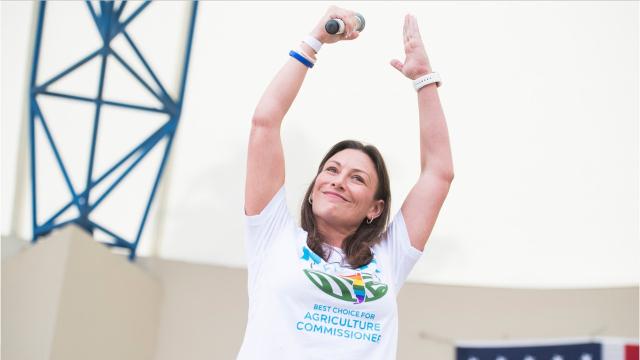 Video: Florida commissioner of agriculture: Who is Nikki Fried?

The new Florida commissioner of agriculture and consumer services is now the highest-ranking Democrat in the state. But who is Nikki Fried?

Florida Agriculture Commissioner Nikki Fried is expected to announce Tuesday that she will run for governor.

Fried would be the second Democrat to announce a campaign for governor after U.S. Rep. Charlie Crist launched his campaign last month.

Fried narrowly won the agriculture commissioner job in 2018 and is the only statewide elected Democrat.

A sharp critic of Gov. Ron DeSantis throughout the pandemic, Fried has been signaling for months that she plans to run for governor.

Fried, 43, is an attorney and former marijuana lobbyist. Her campaign is likely to emphasize marijuana legalization.

Previous coverage: Charlie Crist announces his third campaign for governor of Florida, second as a Democrat

“2022 will be a referendum on marijuana — and getting rid of any electeds standing the way,” Fried tweeted recently.

Fried has been a frequent antagonist to DeSantis, both in policy and politics.

But in a state where Democrats last held the Governor’s Mansion in 1998, she faces plenty of uphill challenges.  In campaign financing, Fried has $1.5 million in the bank – compared with $31.6 million for DeSantis, whose national profile is on the rise amid talk among Republicans that he could be a White House contender in 2024.

Still, whatever DeSantis’ higher ambitions, first would come the governor’s race. While DeSantis has not formally announced his re-election campaign, it’s a certainty.

Also, he’s equally certain to be a target for Democrats both in Florida and nationally in November 2022.

DeSantis and Fried were both elected in 2018 by wafer-thin margins. While DeSantis won the governor’s race by only 32,463 votes, or .4%, over Democrat Andrew Gillum, Fried’s contest with Republican Matt Caldwell was even tighter — with the Democrat capturing the seat by only 6,753 votes.

Fried, a Broward County lawyer, was one of the few political bright spots to emerge in Florida for Democrats that election year and quickly emerged as a leader with the defeat of three-term U.S. Sen. Bill Nelson by Republican Rick Scott.

Fried’s position made her a natural adversary for the governor, whose successful run for governor was pushed by endorsements from then-President Trump and contributions from many of his closer allies.

DeSantis campaigned frequently with Trump, and has never condemned his inciting the crowd that attacked the U.S. Capitol on Jan. 6.

Signs of Fried getting ready to challenge DeSantis became stronger in February, when she released a one-minute, campaign-style video in which she attacked the governor’s leadership during the Covid-19 pandemic.

“While he lashes out at everyone else as if he’s the victim, we all know who the real victims are – every Floridian who has lost a loved one, lost a job, lost a way of life,” Fried said.

She said that Florida under DeSantis was struggling more in the pandemic because of his “blind allegiance to an insurrectionist.”

On the Cabinet, Fried frequently disputed the governor’s approach on policy matters, including environmental issues. She came under attack from Florida Republicans for halting online concealed weapons permit applications during the pandemic, with the NRA dubbing her “anti-gun Agriculture Commissioner Nikki Fried.”