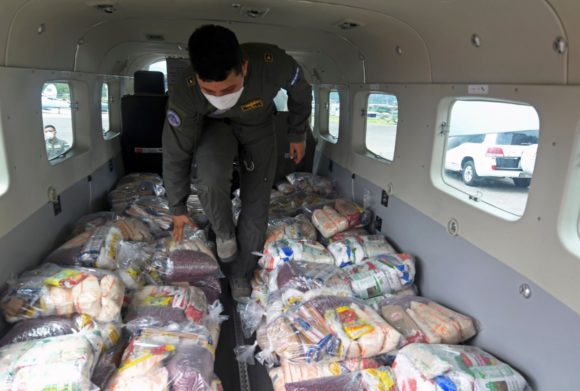 Hurricane Eta is battering Nicaragua with violent wind and devastating rain as it lumbers toward shore, threatening to trigger deadly floods and landslides.

The storm, one of the Atlantic’s most powerful of the year, is packing winds of 145 miles (233 kilometers) an hour, the National Hurricane Center said. Some area could get as much as 50 inches (127 centimeters) of rain, said Paul Walker, a senior meteorologist with AccuWeather Inc.

“The winds will cause some damage but it is certainly going to be remembered for its flooding rains,” Walker said. “It’s the incredible rainstorm it’s going to bring.”

The storm’s slow-moving pace of 5 mph threatens to exacerbate flooding. About 20,000 people have evacuated the from the Nicaraguan coast, mostly from Bilwi and Prinzapolka, Guillermo Gonzalez, director of Nicaragua’s National Disaster and Relief System, said in a briefing. River levels are rising.

Eta is the Atlantic’s 28th storm of 2020, tying a 2005 record for the most named systems in a single year. So many have formed that the hurricane center has used up all its official names and has resorted to designating storms with Greek letters.

The storm was about 30 miles south-southeast of Puerto Cabezas, Nicaragua, according to an NHC advisory issued at 10 a.m. New York time.

While 2020’s Atlantic storms haven’t been as strong as those that emerged in some other prolific seasons, the year has produced a number of records, including 11 strikes on the U.S. and six landfalls in Louisiana, according to Klotzbach.

It’s estimated that this year’s storms have killed about 160 people across the Atlantic basin, and the numerous storms crossing the U.S. Gulf of Mexico’s oil and natural gas fields have led to several shutdowns and evacuations.

While 2020 matches 2005 with 28 storms, this is the first time Eta has been used to name a storm. In 2005, the 28th storm wasn’t added until a post-season analysis of data, so this is also the earliest so many systems have been recorded across the Atlantic.

What is left of Eta could reemerge off the coast of Belize by Thursday and then meander around the Caribbean rebuilding its strength, Walker said. After that, forecast models take it anywhere from Mexico’s Yucatan Peninsula to Cuba, with some predictions taking it into the Gulf of Mexico next week.

“There is still a lot of uncertainty in the long range with this thing,” Walker said.

–With assistance from Aaron Clark, Andrew Janes, Will Wade and Michael McDonald.

About the photo: Honduran Air Force members load supplies on planes, to be taken to residents of Puerto Lempira municipality, department of Gracias a Dios, in preparation for the arrival of the upcoming Hurricane Eta, in Tegucigalpa, on November 2, 2020. Photographer: Orlando Sierra/AFP via Getty Images