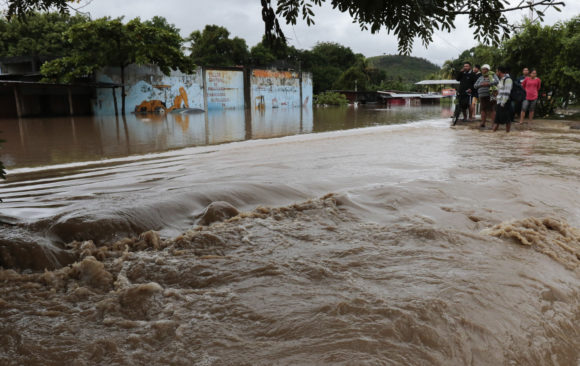 MANAGUA, Nicaragua — Piles of wind-tossed lumber used to be homes. Concrete walls have been pounded into painted chunks. Colorful pieces of clothing hang from tree branches.

The devastation caused by Hurricane Iota became clear Wednesday as phone and internet service began to be restored after the second Category 4 hurricane in two weeks blasted Nicaragua’s Caribbean coast.

The official death toll in Nicaragua rose to at least six, according to Vice President and first lady Rosario Murillo. The victims were spread across the country, swept away by swollen rivers or buried in landslides. Local media reported more deaths that government officials had not yet unconfirmed.

A distraught Filimon Wilfred, 72, said Iota had destroyed his family’s five houses leaving its 18 members homeless in the coastal city of Bilwi.

Iota struck Monday evening as a Category 4 hurricane with winds of 155 mph (250 kph), very close to the force and location of Hurricane Eta two weeks earlier. By early Wednesday, Iota had been weakened by its passage over Central America and dissipated over El Salvador, where it had winds of 20 mph (45 kph). But the storm’s torrential rains remained a threat.

Iota battered Nicaragua’s Caribbean coast and flooded stretches of neighboring Honduras that were still under water from Hurricane Eta.

The storm’s center passed just south of Tegucigalpa, the mountainous capital of Honduras, where residents of low-lying, flood-prone areas were evacuated, as were residents of hillside neighborhoods vulnerable to landslides.

“What affected us most here was the flooding. The Barra Patuca sector has been flooded for the last two weeks,” said Teonela Paisano Wood, mayor of the Honduran town of Brus Laguna. “We are in danger if it keeps raining.”

Mirna Wood, vice president of the Miskito ethnic group in Honduras’ far eastern Gracias a Dios region, was in Tegucigalpa collecting donations for her community ravaged by Eta when Iota hit.

Some 40,000 people in the area had moved to shelters from low-lying land beside rivers and the sea, but others remained stranded near the border with Nicaragua. Some were rescued by Nicaraguan authorities, she said.

“We are facing an incredible emergency,” Wood said. “There is no food. There is no water.”

In Nicaragua, the extent of the damage was unclear because much of the affected region was without electricity as well as phone and internet service, and strong winds hampered radio transmissions.

Panama reported that one person was killed and another missing in its western Indigenous autonomous Ngabe Bugle area near the border with Costa Rica.

Eta caused more than 130 deaths as it triggered flash floods and mudslides in parts of Central America and Mexico. It left tens of thousands homeless in Honduras, which reported 74 deaths and nearly 57,000 people in shelters, mostly in the north.

Before hitting Nicaragua, Iota blew over the tiny Colombian island of Providencia, where Colombian President Ivan Duque said one person was killed and 98% of the island’s infrastructure was “affected.”

About the photo: People stand on the edges of a flooded street after the passing of Iota in La Lima, Honduras, Wednesday, Nov. 18, 2020. Iota flooded stretches of Honduras still underwater from Hurricane Eta, after it hit Nicaragua Monday evening as a Category 4 hurricane and weakened as it moved across Central America, dissipating over El Salvador early Wednesday. (AP Photo/Delmer Martinez)

Coronavirus by state: Texas and California surpass 1 million cases. Florida is next.