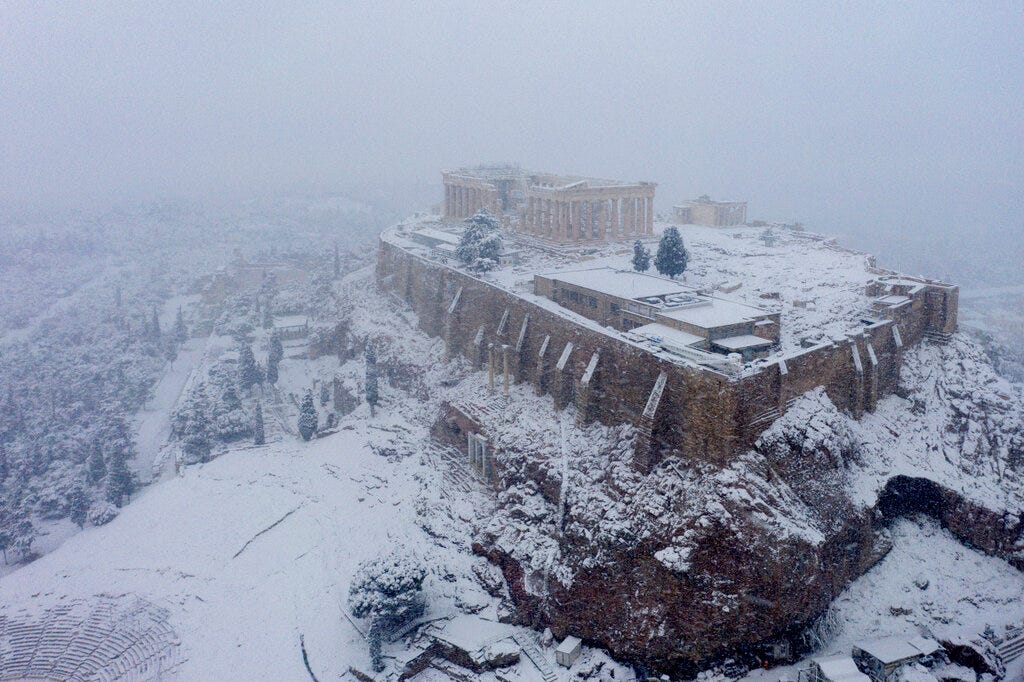 Athens, Greece – Heavy snowfall blanketed the Acropolis and other ancient monuments in Athens, caused power cuts and halted COVID-19 vaccinations in the Greek capital on Tuesday as the weather brought many services across the country to a standstill.

While western Europe got some respite from winter weather, temperatures plunged in the southeast of the continent and storms also battered Turkey.

Snow is common in Greece’s mountains and in the north of the country, but much rarer in the capital. Some Athenians emerged cautiously outside, snapping photos on balconies and in the streets.

The snow arrived as Athens and several other parts of Greece remain in lockdown to curb coronavirus infections. Schools and most stores are closed, and residents must stay indoors during a nightly curfew.

Some children skipped online classes Tuesday to play in the snow. Adults also went out to play, with some digging out skis to use on the capital’s hilly slopes. One man skied along Pnyx hill in central Athens, near the Acropolis.

Norwegian Ambassador Frode Overland Andersen tweeted a video of himself skiing down a hill in the suburb of Filothei with his teenage daughter.

“Challenge accepted,” he wrote, after a friend in Oslo challenged him to prove it really was possible to ski in Athens.

“It was the best day at my home office during the lockdown so far,” the ambassador told The Associated Press. “Sadly, my skis took a rather hard beating, so I will be waxing and prepping for next season.”

Outside the parliament building, orange snowplows cleared streets of ice and snow, while presidential guards, dressed in traditional pleated kilts and pompom-tipped shoes, were given heavy woolen overcoats.

The cold snap, which has already caused snowstorms around much of Europe, kept temperatures hovering around freezing in Athens on Tuesday but was expected to lift abruptly with highs of 14 degrees Celsius (57 degrees Fahrenheit) expected on Thursday.

Sections of Greece’s main north-south highway were also closed until early Wednesday, leaving about 300 lorry drivers stranded at a highway access point outside Thessaloniki, in northern Greece. Most ferry services to the islands were canceled, while flights from regional airports to Athens were disrupted.

“The calls mainly concerned downed trees and transporting people stuck in their vehicles to a safe place, but also to transport kidney dialysis patients to receive treatment,” he told state TV.

“Vaccinations have been postponed, but we have helped transport doctors and medical staff where they are needed, and we helped power technicians get to damaged electricity pylons in areas where access was difficult,” Vathrakoyiannis said.

Power and water cuts were also reported in central Greece. Prime Minister Kyriakos Mitsotakis met with emergency response leaders to assist residents in blacked-out areas and villages cut off by the snow.

“We obviously recommend great care be taken in all movement, all unnecessary movement should be avoided,” Mitsotakis said after the meeting, adding that authorities were doing everything they could to keep the roads open and to restore power to areas without electricity.

“I think we will all show patience as we deal with a phenomenon that is truly unprecedented,” he added.

Beard: How Pistons’ lost more on Blake Griffin gamble than in the standings