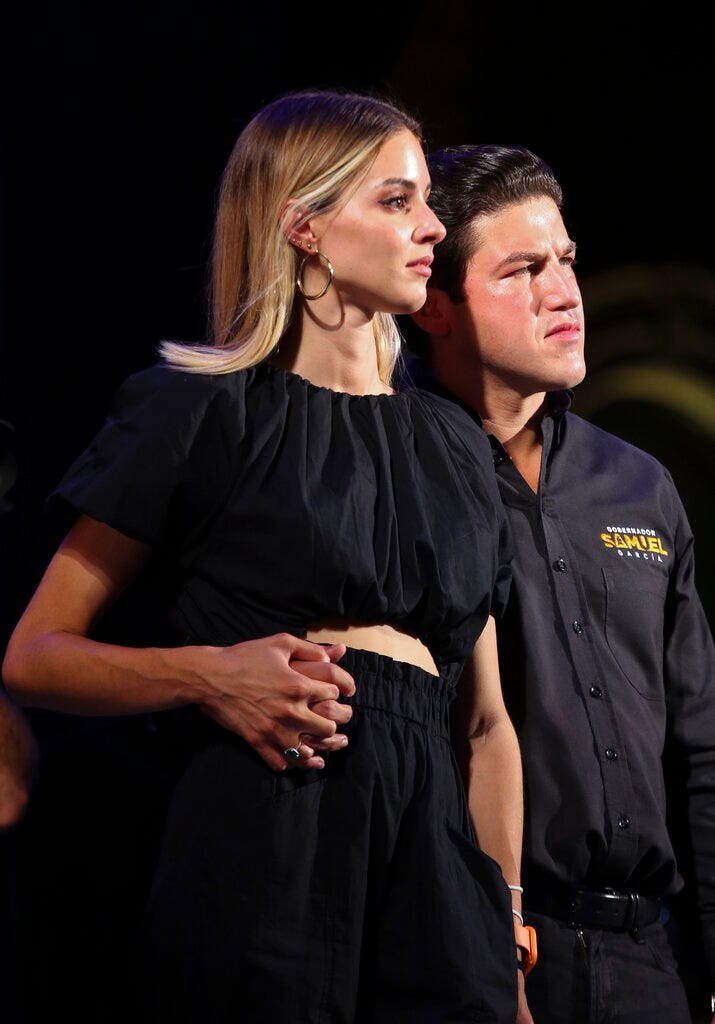 Monterrey, Mexico – The winner of the election triumphed largely thanks to his glamorous but off-message social media influencer wife, and their appearances with music stars. The loser saw her chances fade after video emerged of her in a coaching session with NXIVM sex cult leader Keith Raniere.

It sounds like an election that could have happened in some parts of California, but it was the governorship race in Mexico’s northern border state of Nuevo Leon that proved the most revelatory of Sunday’s congressional, state and local races.

The apparent winner of the race, Samuel Garcia, 33, is a baby-faced former senator whose blond wife, influencer Mariana Rodríguez, is better known for posting videos of herself giving makeup tutorials or clutching a small dog. She has 1.7 million followers on Instagram and 44,500 subscribers to her YouTube channel and some of her videos get nearly a million views.

The couple rocketed to fame across Mexico after they posted a video of Garcia and Rodríguez sitting in a car as he named the towns where they had visited on campaign stops. Rodriguez appears to ignore him and then, apparently seeking to change the subject, she turns the camera on herself and says, “Do you want to see my sneakers?” The focus shifts to her phosphorescent orange sneakers as Rodriguez proudly purrs “Fosfo, Fosfo!”

Not coincidentally, orange is the branding color of Garcia’s small Citizen’s Movement party. Rodriguez has since made her orange sneakers a trademark fashion statement.

It wasn’t necessarily Rodriguez – who fell off a skateboard at one campaign stop – that was the ditzy one of the couple. Garcia himself drew howls in largely impoverished Mexico when, describing what he called his tough upbringing, he recalled how his businessman father used to make him play golf with dad on weekends before allowing him to go out partying during his student years. He also tumbled to the ground while trying to toss a soccer ball.

The couple also ruffled feathers when they appeared singing and dancing with “alternative” rock musicians.

Yet, they were hardly the only oddballs in the race for the Nuevo Leon governorship.

Clara Luz Flores, the candidate for President Andres Manuel López Obrador’s Morena party who came in third in the race, raised eyebrows when she admitted she had met with Raniere, the convicted leader of the NXIVM cult, which had a strong presence in Nuevo Leon. A video emerged of her sitting at a table talking to Raniere about her life in a confessional tone while he listens and asks her to draw conclusions about it.

Nuevo Leon has been Mexico’s breeding ground for strange and cutting-edge politics in recent years. Six years ago, now outgoing Gov. Jaime Rodriguez won office as an independent candidate using mainly his nickname, “Bronco,” which means untamed horse in Spanish. He ran an internet-based campaign with a stallion logo, featuring videos showing him galloping around on horses. He later ran unsuccessfully for president.

But Garcia’s victory – he got 36.7% of the vote in a four-way race – was somewhat surprising since federal prosecutors had announced in May that they planned to file charges against him for allegedly receiving cash donations and illegally obtained funds in his campaign. The announcement came after he implied off-hand that his family had sunk millions into the campaign, something that is not allowed under Mexican law. He later walked back that statement.

Garcia wrote: “I have nothing to hide, no irregularity in my campaign and much less in my personal or professional life. The only thing I am guilty of is running ahead in the polls.”

Voters in Nuevo Leon, a relatively wealthy industrial region, appeared to be drawn by Garcia’s and Rodriguez’s youth and freshness.

“I voted for Samuel because he’s young, and he has offered (public) safety,” Yesenia Aguilar said in the state capital, Monterrey. “I also wanted to send a message to the president – that I think he has done everything wrong, the way he handled the pandemic. I am not happy with him because of so many deaths, women’s killings, so much crime.”

Mexico has suffered almost 229,000 test-confirmed COVID-19 deaths, but because so little testing has been done, the government acknowledges the real figure is probably around 350,000.

“Yes, he’s an influencer, I follow him on Facebook and that’s how I found out about his campaign,” Gutierrez said. “I like his platform, and what’s more, he opposes the traditional politicians who have governed here before.”

Not everyone is charmed.

“Now people are coming into politics who have an entertainment factor, those who dance and sing. It’s not just a Mexican phenomenon, it’s worldwide,” said academic and political columnist Denise Dresser. “It is a degradation in which politics is becoming something else, a show.”

Nor is it clear how “modern” Garcia is.


In one video, one leg of the shorts-clad Rodriguez appears in the foreground, and Garcia is heard muttering: “Put your leg down! Don’t go showing leg! I married you for myself, not so you could go around showing yourself.”

Guest opinion: ‘This is your opportunity to make a difference’

Lightning, Tragedy and Lessons Learned about Safety and Awareness: A Look Back at One of Lightning’s Deadliest Strikes