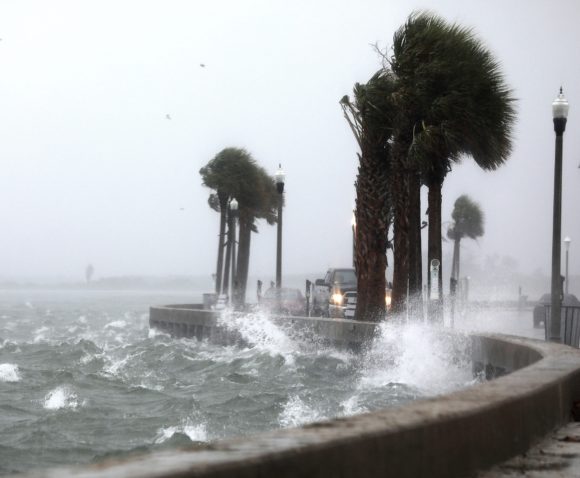 A system swirling across the central Caribbean is expected to become Tropical Storm Iota Friday as it heads toward hurricane-ravaged Central America.

Iota is forecast to reach hurricane-strength and approach Nicaragua and northeastern Honduras as early as Sunday night, the National Hurricane Center said. The region is still recovering from Hurricane Eta, which ripped through the same area earlier this month and left more than 100 dead.

Iota would be the 30th named storm in the Atlantic this year, beating the old record of 28 set in 2005. It’s likely to take a similar path as Eta, which made landfall Nov. 3 as a Category 4 hurricane with winds of 140 miles per hour (225 kilometers per hour). It triggered massive flooding in Central America before heading back out to sea, and passed across Florida Thursday.

Iota could become a Category 3 storm with winds of at least 111 mph as it approaches the coastline, said Jim Rouiller, lead meteorologist at the Energy Weather Group.

“The results would be catastrophic,” Rouiller said. “They are still recovering and it is going to produce another serious threat -– the flooding is going to be tremendous. This is definitely the worst case.”

Since the first storm of the year formed off the U.S. East Coast in May, 2020 has unleashed a conveyor belt of destruction. Hundreds of people have died, billions in dollars of losses and damages have been incurred and records have fallen by the wayside one after the other.

An unprecedented 12 named storms have hit the contiguous U.S., with the Gulf Coast bearing the brunt of the damage. The East Coast hasn’t been spared either, with New York having been plunged into darkness in early August when Hurricane Isaias made landfall in North Carolina and tracked up the Northeast.

So many systems have formed this year that the National Hurricane Center used up its official name list in mid-September and resorted to using Greek letters to designate tropical cyclones.

“We didn’t expect to see the 2005 record go down so soon,” said Phil Klotzbach, lead author of the Colorado State University seasonal forecast. “There is obviously an improved observational component, but any way you slice it, 2020 has been one for the record books.”

Unfortunately, Iota may not mark the end of the tally for 2020. There is just a hint in long-range computer models that another storm could follow, Klotzbach said. Officially, the season ends on Nov. 30, though in 2005 the last storm formed on Dec. 30, according to hurricane center records.

For the U.S., the only saving grace may be that winter weather patterns are starting to take hold that will reduce the threat of a 13th storm striking, Rouiller said.

“The U.S. threat is going down, down, down because we are getting stronger cold fronts,” Rouiller said. “Hopefully Eta will be the end for the U.S. hits, but I will keep my fingers crossed on that. Hurricane forecasting is a humbling business.”

–With assistance from Will Wade.

About the photo: Water splashes against the seawall along Pass A Grille Way in St. Pete Beach, Fla., on Wednesday, Nov 11, 2020, as squalls from Tropical Storm Eta move through Pinellas County. Eta has weakened to a tropical storm just hours after regaining hurricane strength as Florida braces for a second hit from the storm. (Scott Keeler/Tampa Bay Times via AP)