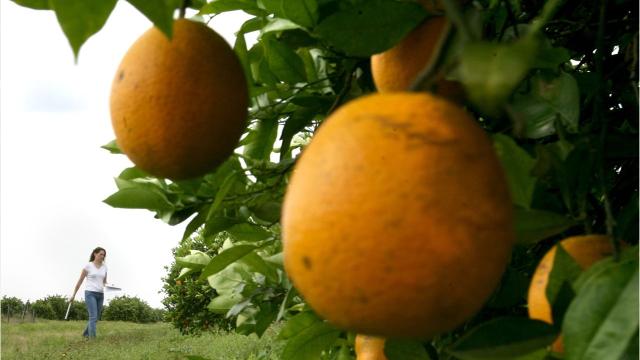 A primer on Florida’s citrus industry, with an emphasis on the five counties of Lee, Collier, Charlotte, Hendry and Glades.

The checks are in the mail.

Or almost in the mail, to compensate Lee County homeowners who lost their citrus trees to the state’s failed canker-fighting campaign 15 to 17 years ago.

The checks are expected to go out Friday, following a long-drawn-out legal fight, said Robert Gilbert, a Coral Gables attorney who represents the homeowners.

“We’re delighted to finally distribute payments to thousands of Lee County homeowners whose private property was taken long ago. While the legal journey was long and difficult, justice ultimately prevailed,” he said.

The amount of money homeowners will receive is based on how many healthy-looking trees they lost, less any compensation the already received from the state.

Homeowners first brought a class-action lawsuit against the Florida Department of Agriculture and Consumer Services in 2003 — and ultimately won their case, following lengthy trials and appeals.

After a seven-day trial in Lee Circuit Court back in 2014, a jury awarded the homeowners $285 per tree, plus interest. With interest, that number has ballooned to $558.

The department handed out $100 Walmart vouchers for the first tree taken and $55 cash payments for any additional trees lost to the eradication program, which will be subtracted from their court-ordered payments.

Homeowners will have to provide legal identification to deposit or cash the checks.

“I want people to realize that when these checks arrive in the mail they are real,” Gilbert said.

He stressed the need for homeowners to act quickly, so they can finally get what they’re legally owed, and to realize the checks aren’t a scam.

The history of the citrus canker case

The Lee County case involved nearly 34,000 trees taken from yards, mostly in Cape Coral. The trees were destroyed between August 2002 and January 2006, following a state finding that they were “exposed” to canker.

To be considered exposed, the trees had to be within a 1,900-foot arc of an infected one, and they were considered a threat and a nuisance in the eyes of the Department of Agriculture, which argued they’d eventually catch the highly contagious disease spreading it further.

Though canker isn’t harmful to humans, it causes ugly lesions on leaves, scars fruit and can make fruit drop early.

The Department of Agriculture launched an aggressive program to wipe out the disease to protect the state’s multibillion-dollar citrus industry, putting the 1,900-foot rule into practice in late 1999. The program ended abruptly in 2006, however, after federal funding got yanked.

Last year, the Florida Legislature appropriated $19.1 million to cover the payments to Lee County homeowners — as well as their legal costs and other expenses — and Gov. Ron DeSantis didn’t object to it.

The Department of Agriculture argued that a special legislative appropriation was needed before it could cut any checks, but Gilbert disagreed, contending that court rulings in favor of the homeowners required it to immediately “pay either way.”

The case, he said, was less about the money and more about his clients’ constitutional rights.

He described the time and the process it took for the homeowners to finally get paid as “sad.”

It’s a case that should have taken a few years to resolve, Gilbert said.

Payments already made in other counties

Homeowners in Broward, Palm Beach and Miami-Dade have already received their court-ordered compensation, but in Orange County they’re still waiting for a legislative appropriation, which Gilbert expects to finally happen this year.

Joe Dolliver, one of the lead plaintiffs in the Lee County case, said he didn’t think the value the jury put on the citrus trees in his case was high enough, especially for his more mature ones, which produced a bounty of fruit every year.

He lost more than a dozen trees, with no signs of canker, some of which were more than 40 years old, he said.

“We took this case on expecting no compensation,” he said. “For the violation of people’s rights.”

Dolliver, now in his 70s, continues to believe the state had no good reason to take the citrus trees at his former home in Cape Coral, especially when the government didn’t properly compensate him for them.

He still remembers the day his trees got chopped down.

“Every year was a great harvest season for us,” he recalled. “We gave fruit to family and friends, we made juice, we froze juice.”

The trees, he said, in a sense became “part of the family.”

While he’s set to receive thousands of dollars in compensation, Dolliver said it came with a lot of aggravation from the tumultuous legal and political fight, which included former Gov. Rick Scott’s veto of a legislative appropriation for Lee County’s homeowners in 2017.

He said he’s glad the case is “final,” but it won’t result in an “earthshaking amount of money.”

Since state crews chopped down his citrus trees, Dolliver said he’s moved several times, but never to a place that had citrus trees.

And he’ll never plant any citrus himself, he said, after the emotional turmoil he’s been through.

Biden orders review of domestic extremism threat in US