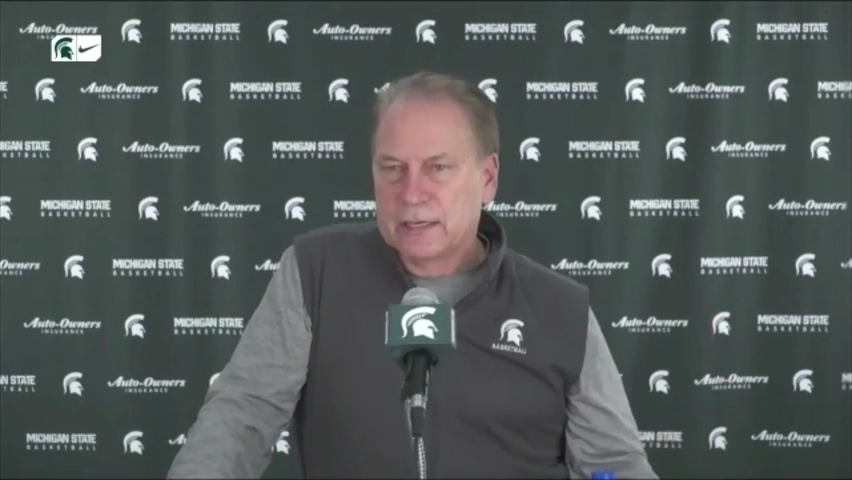 Michigan State coach Tom Izzo looks ahead to facing Purdue on Friday while talking about his “disgust” with insurrection in Washington D.C.

Like most people around the nation, Tom Izzo was drawn to the television on Wednesday afternoon.

Of course, what the Michigan State coach saw made him turn away, doing his best to turn his focus to getting his team ready to take on Purdue on Friday night.

The protests turned riots at the U.S. Capitol building angered many as thousands supporters of President Donald Trump gathered before Congress’ planned confirmation of Electoral College votes for Democratic President-elect Joe Biden. Not long into those proceedings, things turned violent when hundreds of the president’s supporters tussled with police, overran security barriers and broke windows to enter the building. Lawmakers, staff and journalists were locked down and then evacuated as protesters took over the chambers.

“I didn’t watch a lot of it because the little I watched made me sick,” Izzo said on Thursday. “It was a disgrace I think to all of us. And, in all honesty, nothing like that should be tolerated. … We’re going to continue to demand and work with our players to treat everyone with respect, because I didn’t see anybody respecting anybody yesterday. It’s not what I saw at our state capitol and not what I saw at the national capitol in Washington D.C. over the last four or five months.

“And take nothing away, I’m 100% agreeing that people should protest, but I’ve never agreed with protests that led to the destruction of property or lives being lost. I think (former Spartan) Draymond (Green) said, that wasn’t a protest, that was a riot. And I didn’t think there was any class or character shown in that.”

It’s been a tumultuous time in the country following a summer full of protests around the nation following the death of George Floyd at the hands of police in Minneapolis. Izzo had many frank conversations with his team then, and those continued on Wednesday and into Thursday.

Still, it hasn’t been easy for Izzo and the Spartans to reconcile the things they saw this summer with what happened in Washington on Thursday.

“I was disgusted and disgraced by what went on,” Izzo said, “and it makes it very difficult to see things like that happen and then have to go talk to your players and think of some of the things that have happened over the summer and not feel there is some injustice. … But it makes me want to fight even harder for the equality that we all need, and makes me fight harder for protesting. I agree with protesting and I think people have got to be able to say and do what they think. It’s just we’ve got to quit getting to this destructive way and lives being lost.”

Izzo and the Spartans also hope getting back to sports can help people move past what happened on Wednesday and start to find some common ground.

“I know I think my guys are role models and I want them to be role models,” Izzo said. “But we’re not perfect. But I also think that locker rooms prove that people from different races, creeds, different backgrounds, can all get together and when they do we can form an incredible team. So, I hope sports does bring that, so I’m glad we aren’t getting back to sports.”

Added senior guard Joshua Langford, “I think it’s difficult because at the end of the day, we are American citizens. So, it is disheartening and sad to see that going on. … And sports right now, especially when COVID and all the other injustices that has been going on in the world, has been bringing some light to people’s lives. So, we just want to continue to focus on our platform, but at the same time, we’re sad about it, disheartened, and we are concerned.”

Countdown to college: What is a LOCI and how can you use it to your advantage?

Trump’s presidency not just a blip in U.S. foreign policy