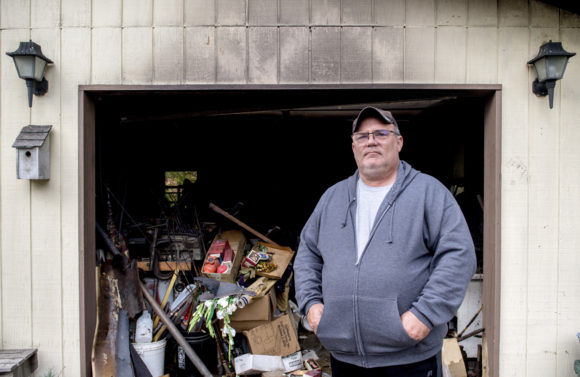 HANNA CITY, Ill. — This all started, this passion for collecting U.S. military-related memorabilia, when Jerry Lance was 6. That was 53 years ago.

“I got my dad’s Navy uniform, and I was hooked on the military after that,” Lance said. “Him and all my uncles were in the Navy. Every time somebody got out of the Navy, they went home and left their uniforms with my grandmother.

“I was sitting in the front room one day and for some reason, she got up and said, `I bet you’d want this.’ That was the beginning.”

From that humble start, Lance built a collection of thousands of artifacts from both world wars, the Vietnam War and other American military conflicts.

“Everything I saw, I had to have it,” Lance said. “The older I got, the more I realized all this stuff is history and people are throwing it away.”

Now, because of a fire last month at his Hanna City residence, it appears Lance will have to throw away most of his collection.

About 7:30 p.m. Oct. 13, a few hours after Lance had perused some of the items stored in his garage, he heard a popping sound. Then he looked out one of his house’s windows and saw a big, red glow.

The Logan-Trivoli Fire Protection District, among three other departments, was able to bring the blaze under control within about 25 minutes. It wasn’t clear what caused the fire, although Lance said he used halogen workshop lights when he visited the garage earlier.

The Peoria County Sheriff’s Office reported Lance’s military collection was worth about $100,000. It was the product of years of visits to garage sales and auctions, among other sources.

“I just started collecting it and it got out of hand, as my wife was telling me,” Lance said with a chuckle about spouse Rochal. “Some of it’s salvageable, but most of it’s gone for good.

Lance’s life long has been connected to the Navy, and not only through his ancestors. He was a sailor, too, from 1979 until 1987.

“All Lances go in the Navy,” he said.

The Navy took Lance to Lebanon, among other places. He said he helped rescue from the water Cuban refugees during the 1980 Mariel Boatlift.

Once Lance returned home to the Peoria area, he went to work for Caterpillar Inc., from where he retired. But he never quit collecting materiel.

Lance wasn’t sure if insurance will cover his losses. When the fire struck, he was just starting to catalog his collection.

About 12 hours after the blaze, Lance visited an auction house in Farmington, where he acquired an Army ammunition belt. On Thursday, a Vietnam veteran who had heard about the fire drove 75 miles to give Lance a hat from the war.

“I collect a lot of local people’s stuff because I want to preserve it,” Lance said. “That’s what it’s evolved into, preserving the history.

“I’m a history nut. It sounds kind of corny, but all those guys in the military were heroes. And I just want to preserve their stuff.”

About the photo (top): Jerry Lance stands in front of his burned-out garage at his home Wednesday, Oct. 14, 2020 in Hanna City, Ill. Along with a vast amount of military memorabilia, Lance also lost his vintage G.I. Joe collection in the fire. (Matt Dayhoff/Journal Star via AP)

Vlahos wrote this for the Peoria Journal Star.