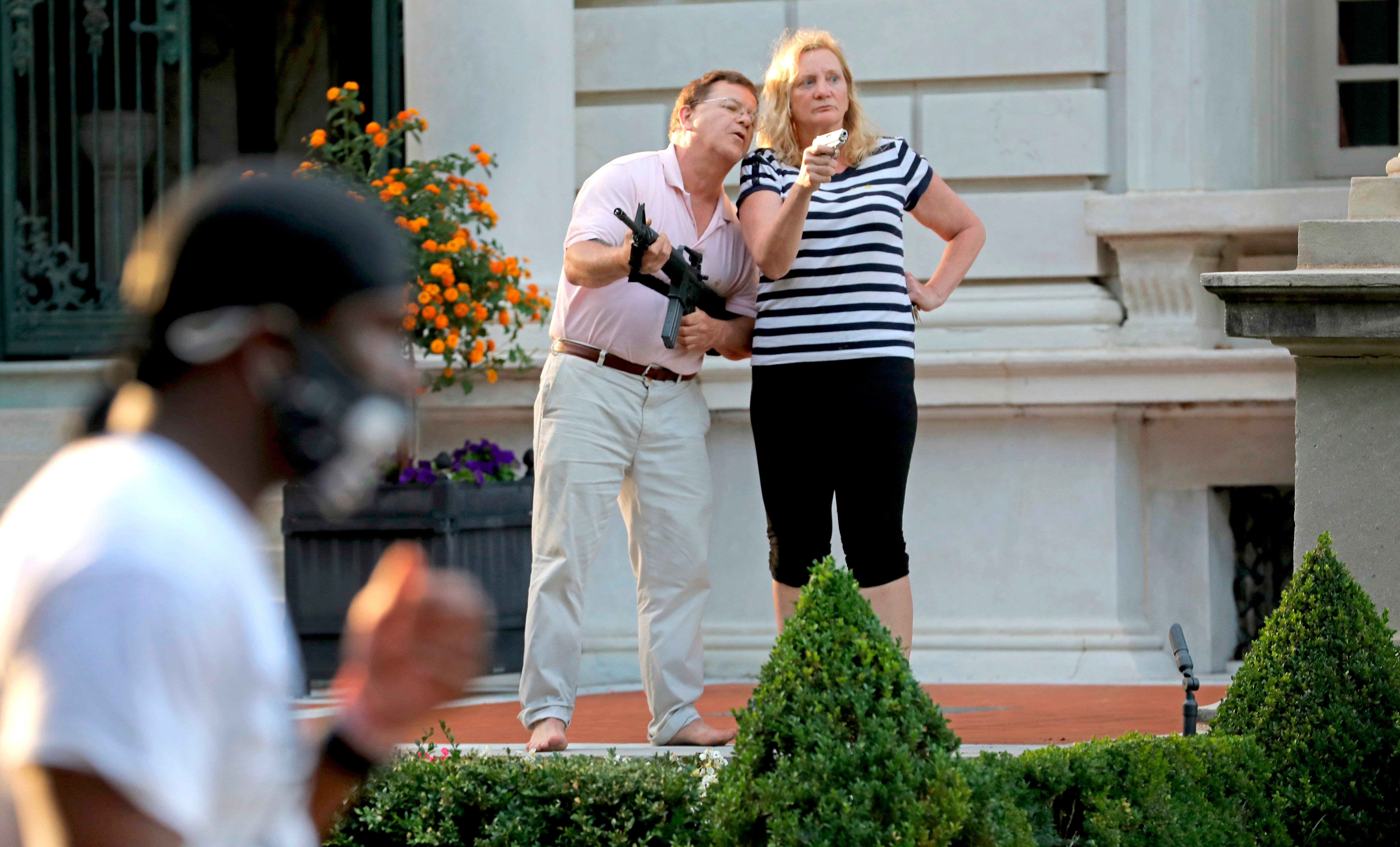 O’Fallon, Mo. — Missouri Gov. Mike Parson announced Tuesday that he made good on his promise to pardon a couple who gained notoriety for pointing guns at social justice demonstrators as they marched past the couple’s home in a luxury St. Louis enclave last year.

“Mark McCloskey has publicly stated that if he were involved in the same situation, he would have the exact same conduct,” the McCloskeys’ lawyer Joel Schwartz said Tuesday. “He believes that the pardon vindicates that conduct.”

The McCloskeys, both lawyers in their 60s, said they felt threatened by the protesters, who were passing their home in June 2020 on their way to demonstrate in front of the mayor’s house nearby in one of hundreds of similar demonstrations around the country after George Floyd’s death. The couple also said the group was trespassing on a private street.

Mark McCloskey emerged from his home with an AR-15-style rifle, and Patricia McCloskey waved a semiautomatic pistol, according to the indictment. Photos and cellphone video captured the confrontation, which drew widespread attention and made the couple heroes to some and villains to others. No shots were fired and no one was hurt.

Special prosecutor Richard Callahan said his investigation determined that the protesters were peaceful.

“There was no evidence that any of them had a weapon and no one I interviewed realized they had ventured onto a private enclave,” Callahan said in a news release after the McCloskeys pleaded guilty.

Mark McCloskey, who announced in May that he was running for a U.S. Senate seat in Missouri, was unapologetic after the plea hearing.

“I’d do it again,” he said from the courthouse steps in downtown St. Louis. “Any time the mob approaches me, I’ll do what I can to put them in imminent threat of physical injury because that’s what kept them from destroying my house and my family.”

Because the charges were misdemeanors, the McCloskeys did not face the possibility of losing their law licenses or their rights to own firearms.

The McCloskeys were indicted by a grand jury in October on felony charges of the unlawful use of a weapon and evidence tampering. Callahan later amended the charges to give jurors the alternative of convictions of misdemeanor harassment instead of the weapons charge.

Parson’s legal team has been working through a backlog of clemency requests for months.

He hasn’t yet taken action on longtime inmate Kevin Strickland, who several prosecutors now say is innocent of a 1978 Kansas City triple homicide. Parson could pardon Strickland, but he has said he’s not convinced he is innocent.