Camillus, N.Y. — Township 5′s Movie Tavern got a new corporate owner earlier this year and the deal brought some upgrades.

Two of the theaters at Movie Tavern now have new large format screens, improved sound systems and new seats. The seats add more legroom between rows and allow guests to go from fully upright to fully reclined at the touch of a button, according to Marcus Theatres, which acquired the whole Movie Tavern chain in February.

The companies announced the deal in late 2018.

Marcus Theatres is owned by Marcus Corp., a public company headquartered in Milwaukee, Wisconsin. The chain offers in-theater dining, just like Movie Tavern, but it’s located mainly in the Midwest and West.

Marcus Corp. also owns a number of hotels and restaurants.

The company is retaining the Movie Tavern name.

Along with the theater upgrades, Marcus is bringing some popular items from its own menu to Movie Tavern sites, the company said. Additions include thin crust pizzas, double smash burgers, several new salads, including the Southwest BBQ Crispy Chicken, and new entrees, including steak and shrimp.

The marshmallow brownie sundae is new to the dessert menu, Marcus said.

The company is also introducing a new loyalty program and launching a number of days with special promotions, including $6 tickets with student or faculty IDs on Thursdays and $5 movies on Tuesdays. Seniors ages 60 and up can see a movie for $6 every Friday before 5:30 p.m.

Elsewhere at Township 5, a fitness center focused on ninja-style obstacle courses will open later this year. 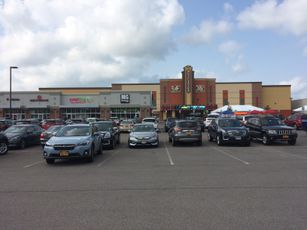 The location will open later this year.