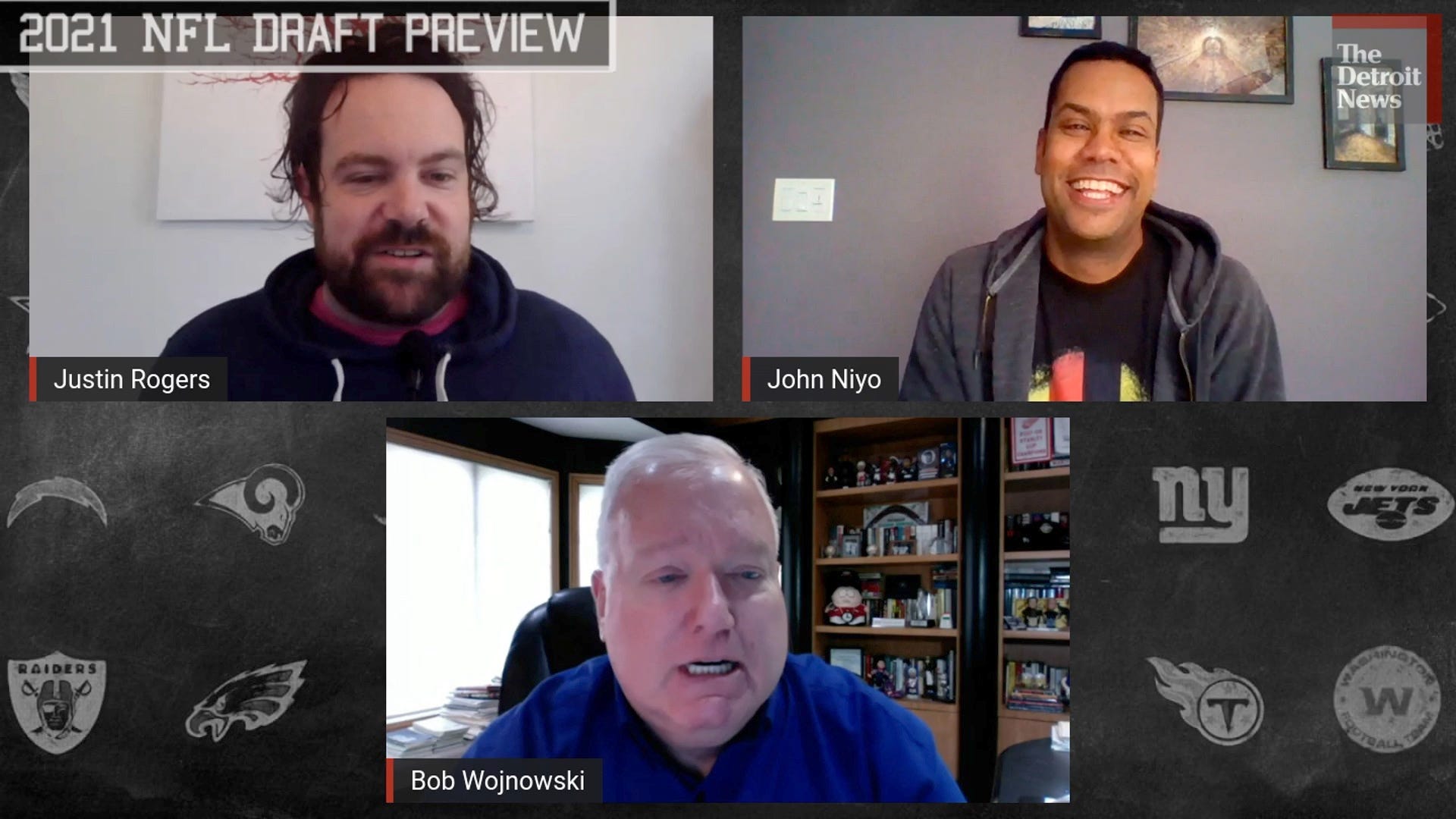 Justin Rogers, Bob Wojnowski and John Niyo look ahead to the 2021 NFL Draft and the Lions’ prospects.

Every NFL draft produces its own drama, whether it’s a blockbuster trade or a surprising selection or an unexpected slide initiated by a leaked video of a prospect wearing a gas mask attached to a bong.

But after a year unlike any other, Gil Brandt, the pioneering former Dallas Cowboys executive who is dubbed “The Godfather” in NFL scouting circles, says the 86th annual edition, which begins a three-day run tonight in Cleveland, “is probably the most unusual draft ever.”

The reasons are many, from pandemic “opt-outs” to missing medical files, a scrapped scouting combine and a shallow talent pool. Two massive trades already have shaken up the draft order at the top, with more expected once Roger Goodell officially starts the clock at 8 p.m. ET. And while this draft will begin with an arms race that could make history — never before have the first four picks all been quarterbacks — how it’ll all play out is anyone’s guess.

Due to the pandemic, some top prospects haven’t played football in 16 months, while others are making the jump to the pros with only a season’s worth of film for NFL teams to dissect. A lack of in-person interviews forced teams to find new and imaginative ways to build their draft boards in 2021.

And then there are all the changes we’ve come to expect across the league. Half of the teams with top-10 picks entering this draft — including the Lions  — have new general managers in place, which only adds to the uncertainty as teams try to read the tea leaves and figure out who likes what, and when and where.

“I think we saw a little bit of this last year, where it’s difficult to predict because, look, groupthink is a real thing,” NFL Network analyst Daniel Jeremiah said, noting the absence of the combine and some postseason all-star games where scouts typically gather and gossip. “But I can’t remember more variance, just in talking to buddies around the league about specific players, where the (draft boards) are so wildly different, and to me that’s what makes it fun.”

Fun for the fans, certainly, but maybe a bit unnerving for the general managers responsible for making the draft selections.

“There’s going to be some teams that are aggressive and gamble on guys they don’t have as much information on and swing for the fences,” Jeremiah added. “But those are the teams that are very secure in their jobs. I think if you’re in a situation where you’ve got to nail this thing, teams are going to be aiming for doubles, not home runs.”

The early innings should be telling, in that regard, with dozens of players in this draft —and at least a handful of the top 10-15 prospects — coming off a year where they didn’t play football. Brandt compared it to his time with the Cowboys in the 1960s and ’70s when players missed time due to military service.

Some, like North Dakota State quarterback Trey Lance, didn’t have a choice this time, either, as most FCS schools postponed their 2020 seasons until this spring. Others had varying reasons for deciding not to play last fall, though.

“And I think everybody that evaluates players has a different way of looking at them,” Ravens GM Eric DeCosta said. “With me, there’s always a little bit of anxiety, because if a guy didn’t play this year, what’s he going to look like next year? There will be some players who haven’t played a football game in 400 or 500 days in college, and that makes you nervous.”

“It’s not to say we’re not gonna draft somebody that opted out — I couldn’t say that,” Colbert said. “But if I have a choice, we’ll take the one that played if their value is close.”

Weighing those prospects is another challenge, though.

“There’s nothing I can compare this to,” Giants GM Dave Gettleman said. “You know, with a handful of these guys, it’s almost like the NBA one-and-done: they go to college for a year and now, bang, they’re in the NBA. …

Most spent their time away from college programs working with private trainers and coaches, as Northwestern’s Rashawn Slater —one of the top offensive tackles in this class —did with NFL line guru Duke Manyweather

“I know I’ve put in the work,” Slater said. “Really, it’s what I’ve been doing this entire time, just learning the game, learning more about technique, and working to improve my body. It all comes down to preparation.”

That’s where NFL teams are left wondering, though. How prepared are they for this draft, really?

The annual scouting combine provides one-stop shopping for teams when it comes to baseline data on prospects. But without it this winter, teams were left with unreliable 40-times and jumbled evaluations from pro days on college campuses.

Relaxed limits on virtual visits did give coaches and GMs plenty of time to meet with players via Zoom, however, and some got creative with it. Nick Sirianni, the Eagles’ new head coach, said he played trash-talking games of “rock-paper-scissors” to test competitiveness.

Still, GMs also are left with incomplete medical files, as only about 150 players were brought to Indianapolis for medical checkups this spring and teams weren’t allowed to bring prospects in for individual visits and more extensive physical exams on their own.

“Nothing scares a general manager more than not having the medical,” said Jeremiah, a former NFL scout with the Ravens, Eagles and Browns. “There’s going to be a lot of guys that get picked this year that teams are not comfortable with medically. You’re also going to see teams comfortable with trading some picks this year for picks next year, just because once we get to the back half of the draft you’re literally flying blind on these kids medically.”

That probably would be true even without the red flags, however. Because the thing that makes this draft class truly unique, Brandt says, is just how small it is.

In each of the past two years, there were nearly 1,900 NFL hopefuls who’d signed agreements with agents. This spring, that number is just over 650, thanks largely to an NCAA ruling granting players an extra year of eligibility due to COVID.

“So I think what we’re gonna see is that the player that you usually drafted in the sixth round might be a fourth-round draft pick now,” Brandt said.

And then it’ll be a considerably smaller pool of undrafted free agents that teams will be chasing with larger signing bonuses this weekend. But it also will be a “bountiful year” in 2022, with Brandt predicting a deep draft with upwards of 2,500 players. That’s one more reason, perhaps, the Lions were excited about the return they got in the Matthew Stafford trade, adding a first-rounder in 2022 and ’23. And why new GM Brad Holmes probably isn’t sweating the fact he’ll begin the draft with only two Day 3 picks, and none in the final 100.

“Everybody that I talk to around the league just says, ‘We don’t know what the heck we’re going to do with our sixth and seventh-round picks this year,” Jeremiah said. “If I can get rid of them, I’m going to get rid of them, just because in next year’s class those sixth and seventh-round picks are going to be really valuable. You’ll see teams be aggressive in Rounds 2 and 3 and they’ll be parting with these Day 3 picks like nothing.”

In other words, this will be something different, all right.

“I would say it’s the most unique year,” said Duke Tobin, the Bengals’ director of player personnel. “It’s a year like no other.”