Democrats who pushed the new tax through the Legislature on party-line votes wanted to keep the 0.57 percent tax as simple as possible, with few exemptions or special rates for particular industries or businesses.

“I don’t believe we’ll move forward on that bill,” Kotek said, adding that the proposed exemption would take a significant bite out of revenues for education. “I’m not surprised it’s out there. But we just created a new business tax … Going forward, I’m sure we’ll see adjustments on that bill, on that new tax.”

The tax is calculated on a business’ annual sales above $1 million and is expected to eventually raise more than $1 billion a year. It takes effect in 2020 and businesses will be allowed to subtract 35 percent of either their labor or capital costs from their sales.

All but two House Republicans — Rep. Cheri Helt, of Bend, and Rep. Ron Noble, of McMinnville — signed onto the bill. Ten of the Senate Republican caucus’ 11 members are sponsors.

Seven of House Democrats’ 38 members signed onto the bill, as did four of the 18 Senate Democrats.

Sen. Mark Hass, a key architect of the business tax who is not among the new bill’s sponsors, did not respond to a request for comment on the proposal Monday. 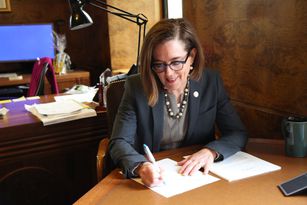 The governor cut a deal with Senate Republicans to end their Capitol walkout and get the bill passed, in exchange for killing bills to tighten Oregon’s vaccine mandate and increase regulations on guns.

House Bill 3445 would exempt all sales of farm products from the tax, including sales of “agricultural, floricultural, horticultural, viticultural, vegetable and fruit products, livestock and meats, poultry, eggs, fluid milk, bees and honey.”

Rep. Greg Smith, a Republican from Heppner who is a chief sponsor of the bill, said it would extend to the rest of the agricultural industry the break he negotiated for agricultural cooperatives in the tax and education spending law, House Bill 3427. Taxing the co-ops, which buy, store and sell members’ products into the global marketplace, would have “put a huge, huge, unfair and uncompetitive burden on our wheat growers,” Smith said.

“Now there’s the issue for ag folks primarily in the (Willamette Valley)” who don’t belong to co-ops, Smith said. The new tax law “created an unfair advantage for those cooperatives, so my legislation tries to correct that.”

“It’s really, really profound in the dairy industry,” Smith said. “Some belong to a co-op such as Tillamook and others do not, so you could have two neighbors where one is paying the tax and the other isn’t.”

Smith said he was unsure of the outlook for the bill to pass with just one month left until lawmakers must adjourn, given Democratic leaders have expressed willingness to consider only “minor tweaks” to the new tax law.

“For me, it was about initiating a conversation and making sure my colleagues understood the disparity in the agricultural industry,” Smith said.


Visit subscription.oregonlive.com/newsletters to get Oregonian/OregonLive journalism delivered to your email inbox.