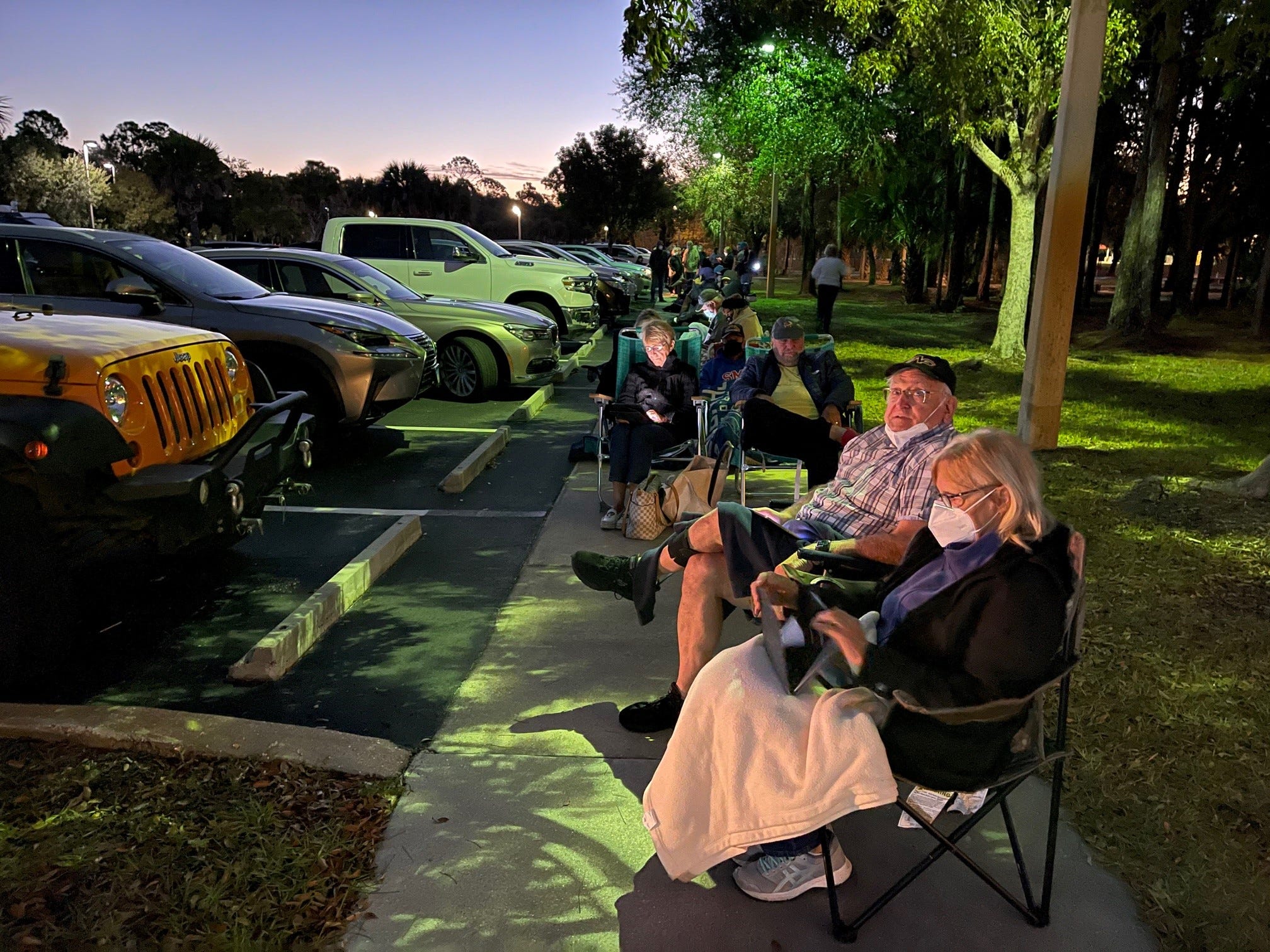 About 300 people lined up by 8:30 a.m. Monday for the COVID-19 vaccine, equal to the number of doses available at the Estero Park and Rec Center.

As a massive vaccination program that could see 1.5 million shots administered in Lee County gets underway, officials urged patience as it works to curtail the COVID-19 virus that has brought death, illness and economic peril to the region.

Distribution of Moderna’s double-dose COVID-19 vaccine began at a single site in Lee County on Monday with additional sites planned this week to provide the free vaccine to residents and visitors. Two doses will be needed to inoculate people from the fast-spreading disease.

“Please remember not everyone can get in line today; there just is not enough vaccine just yet,” Lee County Manager Roger Desjarlais said after the local program began Monday. “We really are pleading with people to be patient and maintain your social distancing.”

Lee County’s sites will offer the Moderna vaccine, developed by a Massachusetts biotechnology company.  It is administered with two shots, spaced 28 days apart, and is given in the muscle of the upper arm.

Vaccination efforts kicked off Monday at the Estero Park and Recreation Center.

Sites in Lehigh Acres, Bonita Springs and Fort Myers will be open Tuesday with sites open Wednesday in North Fort Myers and Cape Coral as well as the Lakes Regional Library in the unincorporated county.

While significant work is ahead in getting the vaccines administered, Lee County Commission Chairman Kevin Ruane said he welcomes the start of the mass inoculation.

“I’m real excited, it’s a celebration,”  Ruane said “You look back nine months ago  and look at where we were and where we are today, it’s really a fabulous day as far as I’m concerned, seeing the progress that we’ve made.”

More: Have questions about COVID-19 vaccine in Lee County? Here’s what we know

Most of the key decisions on the program have been made by Gov. Ron DeSantis. Some details on the vaccine program are still being worked out, but all vaccines will be administered with no appointment or payment required.

The message on Day One of the vaccination effort was a plea for the public to understand that getting a shot may take some time, both in being able to access sites and in the time spent waiting for a turn with the needle. But he acknowledged people want to be immunized as quickly as possible.

“Development (of the vaccine) happened in a much more rapid pace than any other in our history,” Desjarlais said. “There is so much pent-up demand that people have been pretty anxious about it.”

Officials stressed that the details of the vaccine program are evolving. For example, there has been no definitive word from Tallahassee on whether people who have serious health ailments but are younger than 65 will receive any priority.

That decision comes from the governor, who has given priority to frontline healthcare workers and people older than 65, but other groups could be added. State health officials say there could be some broadening of the priority categories.

“The expectation is those other populations will roll into the priority list,” said Angela Smith, who is in charge of state public health operations for Lee County. “They will likely prioritize individuals with morbidities and other underlying medical conditions.”

Desjarlais said the county and Lee County branch of the state Department of Health will have a better idea on how logistics will work after gauging what residents are facing to step up and receive the first doses.

“The dates and additional times, that will be coming from the state in the next couple of days,” Desjarlais said. “This is a state health department operation. Lee County has been asked to help. It is allowing us to put the full weight of the (county) organization behind it because it needs to be successful.”

The county will handle the physical task of providing space, security and information concerning how much of the vaccine is available on a given day.

The message to people in Lee County is that the end of the wait is in sight but not quite at hand as the vaccinations roll out.

Desjarlais called it “almost an all hands on deck operation.”

State public health department employees are expected to handle administration of the vaccines at the start, but Lee County paramedics will be available if needed to pick up the pace of giving the shots.

“We’ll just have to see what the demand looks like and how fast the lines move,” Desjarlais said.

Sheriff Carmine Marceno said that deputies will be on hand to handle security and help arriving citizens get to the right place.

“We’re deploying deputies at all the different locations,” Marceno said. “We want people to understand, just be calm, relax, we are going to help everybody at the locations.”

The portable observation towers used by the sheriff’s department will be deployed at vaccine sites to keep a broad view of the crowds queueing up for the long-awaited shots.

The state health department announced Monday that the doses provided at each vaccination site will increase from 300 to 400 effective Tuesday.

In addition to sheriff’s deputies local police officers from the city police departments in Fort Myers and Cape Coral will also be assigned.

As a safety and security measure, the public has been asked not to start getting in line until 8 a.m. each day.

Doses of the vaccine have initially been allocated to the county based on local population and at this point does not take into account visitors already in Florida or who have plans to arrive in the next few weeks.

Desjarlais noted with an estimated population of 735,000 the county will be very busy  with inoculations. It will be about a month before the first residents begin receiving the second dose, administered 28 days after the first.

Snowbirds, vacationers and others who are not residents will be allowed to receive the vaccine at the seven Lee County locations.

“Will we turn them away if they’re from another state? No, we won’t,” Desjarlais said, warning that people from outside Florida who head home before getting the second shot may find the vaccine back home is the Pfizer-BioNTech vaccine and not the Moderna vaccine distributed here.

Desjarais stressed that the county is being asked to take on a project unlike any that has been launched in modern times, and changes may be made to the program.

A county information campaign will use the mass media, social media, digital road signage, and the county website as conduits for information about the sites and the vaccines and supplies available on a particular day.

Testing for the COVID-19 virus at Century Link sports complex on Six Mile Cypress Parkway has been suspended for the remainder of the year.

Desjarlais said the people working on the vaccine program realize that it will take a toll on people who wait for what could be hours in line for a shot and said that as the program rolls out, new procedures could become clearer. 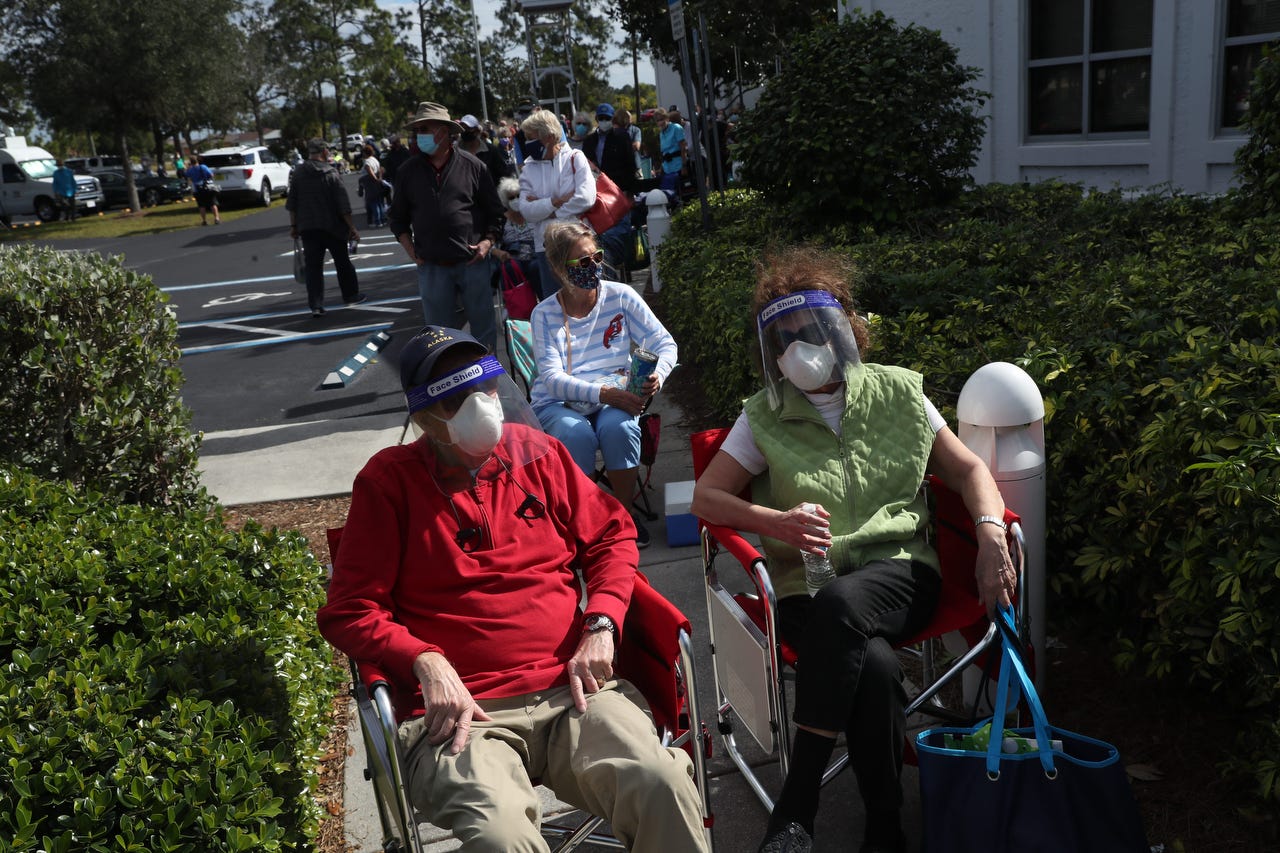 “An unbelievable gift, a light at the end of the tunnel,” Naples couple describes COVID-19 vaccine.

“An unbelievable gift, a light at the end of the tunnel,” Naples couple describes COVID-19 vaccine.

“We know people are going to be anxious, the general population has been anxious for the past several months,” Desjarlais said. “Each day we will gain a little more knowledge. We’re going to ramp up over the next few days as these vaccinations become available.”