Naples woman finds over 100 pounds of trash on Kice Island

From grocery store shopping bags to retail delivery packaging and plastic straws, the product has found its way into everyday life, but its widespread use has put sea life at risk.

For the first time, a study produced by the nonprofit ocean conservation organization Oceana reveals the extent of how harmful plastic can be to marine mammals.

“In our report, there a lot of examples of what happens when marine mammals swallow plastic: lots of detrimental effects leading to, in the worst case, death,” lead author and Oceana senior scientist Kimberly Warner said. “There’s also quite a lot of pain and discomfort and sublethal effects by impacting or perforating the gut.”

Oceana’s report, “The Plastics Crisis Unfolding in Our Oceans”, details findings from government agencies, organizations and institutions that not only collect data on sea mammals ingesting plastic, but becoming entangled in it, too.

“When animals become entangled in plastic, they can drown, choke to death or suffer physical trauma, such as amputation and infection,” the report says.

Since 2009, the study shows nearly 1,800 animals from 40 different species were adversely affected by plastics. Among the largest groups were manatees and sea turtles and nearly 80% of the animals in the report were listed as threatened or endangered.

The study notes that not all animals affected by plastics are represented.

“Not every animal is reported, and many animals are too decomposed to determine why they died,” the report says. “Those not observed and reported to sea turtle and marine mammal stranding response networks likely far outnumber the nearly 1,800 animals we report on here.”

The Florida Fish and Wildlife Conservation Commission sent data sets to Oceana for the study including some 700 cases of sea turtles, manatees and other mammals.

Sea turtles made up a large portion of the study and each species was represented. More than 300 green sea turtles, more than 200 loggerheads, about 150 Kemp’s ridley and dozens of hawksbill, olive ridley and leatherbacks were affected by plastics.

On Fort Myers Beach, one not-for-profit is dedicated to the recovery of sea turtles.

Eve Haverfield founded Turtle Time Inc. in 1989 to monitor sea turtle activity along the Lee County coastline. She said sea turtles of all ages are affected by plastic litter in the Gulf of Mexico.

Sea turtles eat jellyfish, and Haverfield said when plastic bags reach the Gulf, they fill up with water and look, to the turtles, just like jellyfish.

“Turtles ingest the plastic and basically die of starvation because it blocks the (gastrointestinal) system,” she said.

Sea turtles maintain the health of the oceans and strike a balance in nature, Haverfield said. Jellyfish eat fish eggs, and if sea turtles didn’t control jellyfish populations, they would decimate fish eggs

“Sea turtles are the mainstay of the health of the oceans,” she said.

While plastics in the oceans pose a global problem, a recent report published in Science Advances says the United States has generated the largest amount of plastic waste of any other county.

The October 2020 report says, “the amount of plastic waste generated in the United States estimated to enter the coastal environment in 2016 was up to five times larger than that estimated for 2010, rendering the United States’ contribution among the highest in the world.”

On Marco Island, Colleen Gill has been picking up beach litter for a few years now. Every morning since 2017, she walks the beach collecting garbage, a majority of which she said is plastic.

Gill works as an eco-guide for Florida Adventures and Rentals on Marco and said she’s noticed a large amount of garbage on the barriers islands since the beginning of the pandemic.

“There are so many more visitors to islands and I take it upon myself to pick up garbage,” she said.

Gill, along with her coworkers, hosted a trash pickup Oct. 23 where 60 volunteers collected about 3,850 pounds of garbage from those barrier islands. She said the hope is to make this a semi-annual event before and after season.

“I just hate seeing all that plastic, I’ve personally seen what it does with birds caught in fishing line and plastic soda rings,” Gill said. “I’ve heard stories about turtles when they do necropsies with plastic in their stomachs and even manatees getting tangled as well.”

This first-person evidence is well-supported in Oceana’s report, and while Warner said picking up trash is important, the problem is too big for individuals alone to tackle.

Unfortunately, this problem can’t be solved by cleaning beaches alone, Warner said. “we need to turn off the tap of production.”

“Of course, people should mind their own plastic litter and if they see it out there try to collect it,” she said. 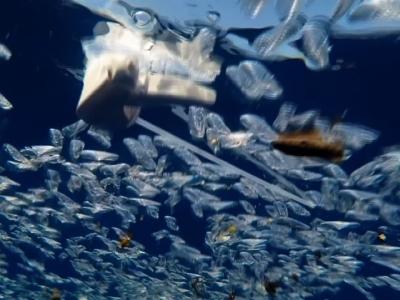 Canada’s Prime Minister Justin Trudeau announces plans to ban single-use plastics as early as 2021. Speaking at a nature reserve south of Montreal, Trudeau said items to be banned include such as water bottles, plastic bags and straws. (June 10)

But Warner said local policies limiting the use of “needless” single-use plastic is the best bet.

“Call legislators or decision makers and ask for a stop to the needless trash going into the oceans,” she said. “Support statewide and national legislation. We are big supporters of the Break Free from Plastic Pollution Act of 2020 in Congress.”

Sea life faces many stressors including ever-intensifying storms brought on by climate change that destroy habitats and feeding grounds Warner said, and plastics are just another needless problem added to the many threats they already face.

“The time to act is now,” Warner said. “It’s time for us to rethink how we use this material and how we can reuse and resell it instead of using disposable products.”