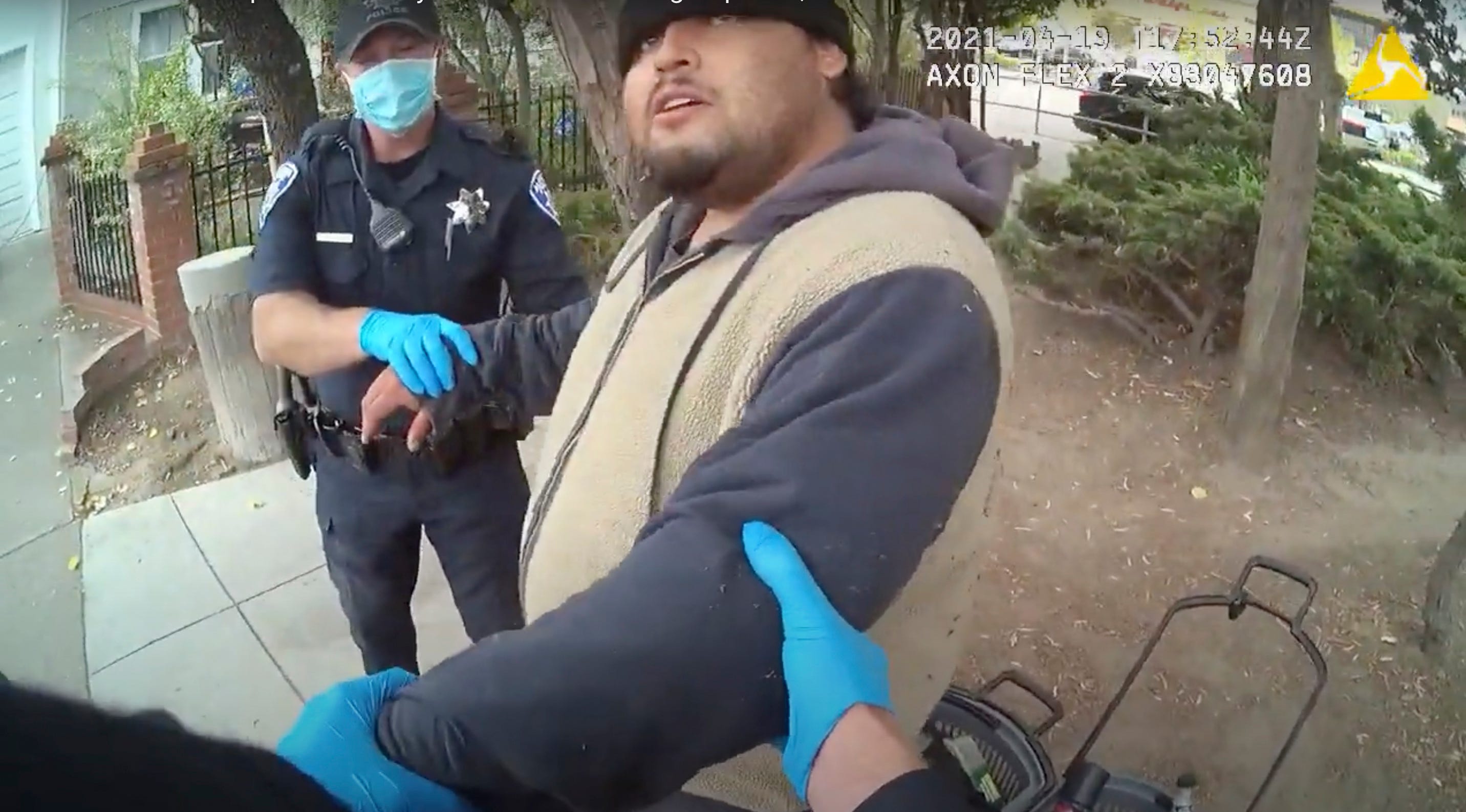 San Francisco — Police in the Northern California city of Alameda released body cam footage late Tuesday that shows officers pinning a man to the ground for more than five minutes during an arrest last week that ended in his death.

Mario Gonzalez, 26, stopped breathing after an April 19 scuffle with police at a park in Alameda.

A police statement said Gonzalez had a medical emergency after officers tried to handcuff him.

His family contends he was killed by police who used excessive force.

The nearly hourlong video from two officers’ body cameras shows police talking to Gonzalez in a park after receiving 911 calls that he appeared to be disoriented or drunk. Gonzalez seems dazed and struggles to answer questions.

When Gonzalez doesn’t produce any identification, the officers try to force his hands behind his back to handcuff him but he resists and they take him to the ground.

The officers repeatedly ask him for his full name and birthdate.

“I think you just had too much to drink today, OK? That’s all,” the same officer says. Later, he adds, “Mario, just please stop fighting us.”

Gonzalez, who weighed about 250 pounds, grunts and shouts as he lays face down on some wood chips while the officers restrain him. One officer puts an elbow on his neck and a knee on his shoulder.

“He’s lifting my whole body weight up,” an officer says at one point.

One officer also appears to put a knee on his back and leaves it there for about four minutes as Gonzalez gasps for air, saying “I didn’t do nothing, OK?”

Gonzalez’s protests appear to weaken and after about five minutes he seems to lose consciousness.

Shortly before he stops breathing, one officer asks the other: “Think we can roll him on his side?” but the other answers, “I don’t want to lose what I got, man.”

Apparently seeking reassurance, the first officer asks “we got no weight on his chest?” then repeats “No! No weight … no weight.”

The officers roll Gonzalez over and perform cardiopulmonary resuscitation but he was later pronounced dead at a hospital.

Gonzalez left a 4-year-old son and also was the main caretaker of his 22-year-old brother, who has autism, his family said.

An autopsy is pending to determine the cause of his death but at a news conference Tuesday, family members blamed the police, saying officers escalated what should have been a minor, peaceful encounter with the unarmed man.

“The police killed my brother in the same manner they killed George Floyd,” said his brother, Gerardo Gonzalez.

“He’s a lovely guy. He’s respectful, all the time,” said Mario’s mother, Edith Arenales. “They broke my family for no reason.”

Alameda “is committed to full transparency and accountability in the aftermath of Mr. Gonzalez’s death,” the city said in a statement. It said Gonzlez’s death is under investigation by the Alameda County Sheriff’s Department, the county district attorney’s office and a former San Francisco city attorney hired by the city to lead an independent probe.

The three officers involved in the arrest have been placed on paid leave during the investigation.