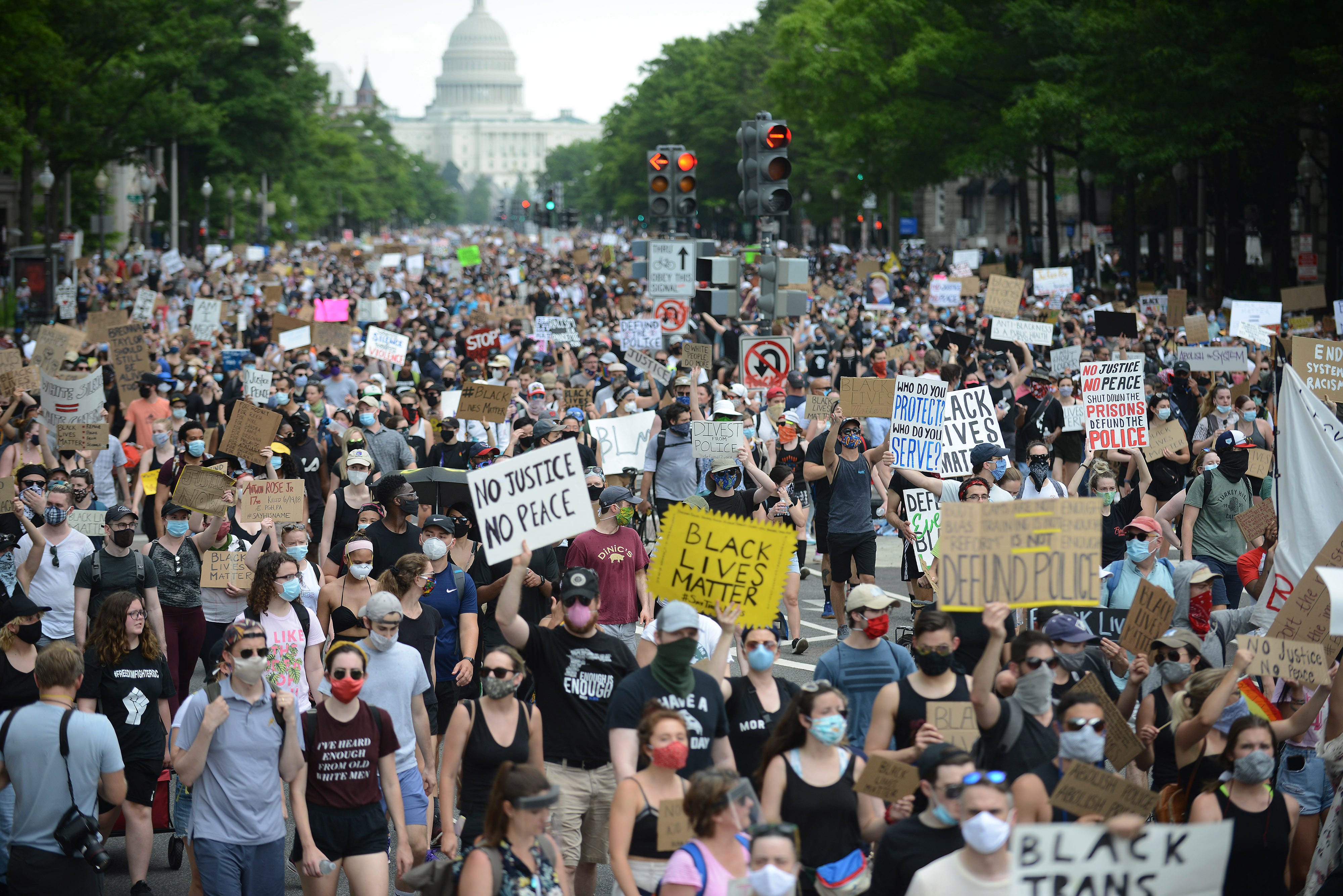 Washington — In April, after being chased by police from Alexandria, Va., who thought someone in his car had shot at a building in Old Town, Anthony Louis crashed on a highway overpass in the District of Columbia and then fled on foot over a Jersey barrier, falling 23 feet to the road below.

There, the 35-year-old was struck with a stun device by a U.S. Park Police officer and restrained with the help of officers from Alexandria, according to Alexandria police. Louis, a father of three, died later that night.

While some bystanders captured grainy video of parts of the incident, neither the Alexandria nor U.S. Park Police officers on the scene wore body cameras. Park police have offered little public comment about their decision to use force, and Louis’s family says its pleas for details have gone unanswered, even as questions about the case continue to build. Police said local prosecutors dropped charges against the three passengers in Louis’s car at their recommendation.

“We need to know the cause of death, how many times he was Tased, the voltage,” said Louis’s sister Margaret Middleton. “I’m just real concerned and afraid that nothing is going to be done.”

Outrage over the police killing of George Floyd in Minneapolis has prompted lawmakers and officials in many places across the country to mandate more transparency, and oversight, after police use serious or deadly force. The Justice Department, when brought in to investigate local police, often insists on steps to curb the use of force and improve accountability, such as requiring officers to wear body cameras.

Yet federal law enforcement has remained largely exempt from those kinds of rules. Federal police typically don’t identify members who shoot or kill people. Unlike their local counterparts, they rarely hold news conferences on officer use-of-force incidents or take questions.

That makes it almost impossible for loved ones of those killed in encounters with federal police to understand a person’s last moments and for the public to scrutinize police tacticsor the conduct of individual officers.

“There is a double standard,” said Christy Lopez, who co-leads the Innovative Policing Program at Georgetown Law.

Lopez, who previously led Justice Department investigations of police conduct in Ferguson, Mo., and elsewhere, said federal police forces could be “at the forefront” of change but instead have failed to “keep up with the times.”

Former D.C. police chief Peter Newsham, now the police chief in Prince William County, Va., said, “I think it’s in the best interest of police as a whole if we’re all abiding by the same rules, especially with regards to transparency.”

Members of the public “don’t really know the difference between federal police and local police,” he said. “When they see a uniform and a badge, they assume it’s all police.”

In the Washington area, that officer could be from one of nearly three dozen agencies. There are the more recognizable forces, D.C. police, U.S. Park Police and the Secret Service among them. But there is a host of other federal departments including the National Zoo police, the Supreme Court police and the U.S. Mint police. Thousands of federal police protect public officials, parks, buildings and roads in the Washington area. Some have jurisdiction over large swaths of land, and many wear uniforms, such as officers with the Secret Service who patrol outside the White House and the District’s many embassies.

Though restricted to certain areas of the city depending on the department, all have the power to make arrests, issue citations or clear a street. Federal officers regularly work with D.C. police on traffic accidents and protests, while following different rules and regulations.

The U.S. House of Representatives has passed legislation that would make recording and releasing body camera footage mandatory in use-of-force cases for all uniformed federal officers, though the measure has not made it through the Senate. No agency in the Justice Department – the FBI, the Drug Enforcement Administration, the Bureau of Alcohol, Tobacco, Firearms and Explosives, the U.S. Marshals or the Bureau of Prisons – uses body cameras.

“The rationale for this is certainly operational safety and security concerns,” a Justice Department official told The Post in 2019, “such as protecting sensitive or tactical methods used in arresting violent fugitives or conducting covert investigations.” The department did not respond to a recent request for comment.

Larry Cosme, president of the Federal Law Enforcement Officers Association, said in an interview that his group favors cameras for uniformed federal officers but not public disclosure of the video.

“What is the purpose?” Cosme asked. “Because some group is screaming and shouting about something, that we need to release it? Well, there has been footage that’s released that exonerates police officers and agents and guess what? These groups are still screaming.”

Cosme said he thinks public release of video can cause more confusion, because only snippets get played in the media. And he said he thinks releasing names of officers who use serious force would put them in danger.

“I think the better way to tackle this is to have the federal agencies have an immediate press conference” after an incident, Cosme said, “so that the public has a greater understanding” of what happened.

In the Washington area, key information about instances in which federal officers have used serious force hascome from local police, other outside agencies or people who witnessed the incidents.

“Federal law enforcement, and the United States Park Police in particular, operate under a system devoid of commitment or adherence to accountability and transparency to the communities which they are to protect and serve,” said Negeen Ghaisar, whose brother was fatally shot by two U.S. Park Police officers in 2017 in Fairfax County, Va.

When a man was shot and killed by an FBI agent at the CIA headquarters in Northern Virginia in May, the FBI said there had been a security incident and the man emerged from a vehicle with a weapon. But they did not reveal what kind of weapon the man had, what actions provoked the shooting or the man’s name.

The family of Ashli Babbitt continues to question the fatal shooting of the pro-Trump demonstrator by a Capitol police officer during the Jan. 6 riot and demand the public release of the identity of the officer,who has been cleared of wrongdoing by federal prosecutors. That shooting was captured on video by members of the mob, some of whom have been charged with crimes related to their presence in the Capitol.

In December, when an FBI agent shot and wounded a man on the Metro in Maryland, the federal government would not name the shooter, say why he fired or even say whether the victim survived. The agent has since been charged with attempted murder; public details have come from Montgomery County and transit officials.

In contrast, states and localities have adopted a patchwork of police accountability measures, with the District’s among the most sweeping. If D.C. police officers use serious force, including firing a gun or deploying a Taser, the council mandated last year, the department must release that officer’s name and body camera video in about a week. Families of victims or the victims themselves can request that video not be released, though the mayor can overrule.

Most local forces in the Washington area require officers to wear body cameras. Alexandria’s pilot effort to equip officers with the cameras has been repeatedly delayed by financial concerns.

Mara Verheyden-Hilliard, a constitutional rights attorney and co-founder of the Partnership for Civil Justice Fund, said all the work to change policing to increase accountability and transparency “falls by the wayside when you allow thirty-plus agencies on the streets of the District of Columbia, to use their awesome powers of lethal force and arrest, and yet they are not accountable to the people through the democratic process.”

Scott Michelman, legal director of the American Civil Liberties Union of D.C., said when both District and federal officers are working on D.C. streets, it is more difficult for residents and advocates to scrutinize the actions of federal officers.

The disparity was clear, he said, in two lawsuits his group filed against law enforcement alleging constitutional violations at Washington protests. A challenge to mass arrests by D.C. police on Inauguration Day in 2017 relied heavily on police body camera footage and resulted in a $1.6 million settlement.

But Michelman said it has been challenging to gather evidence in a lawsuit the ACLU filed against federal police who forcibly cleared demonstrators from Lafayette Square last summer. At the time, the Trump administration had filled Washington with federal officers, some of whom were spotted without name tags and in uniforms that did not say which agency they represented.

In some cases, the refusal of federal law enforcement to release information or adopt accountability measures has created friction with local counterparts.

Until October of last year, the Department of Justice specifically prohibited local police working on federal task forces from using body cameras, prompting some chiefs across the country to pull their officers out.

And Fairfax County and the Justice Department have been at odds for years over the handling of the Bijan Ghaisar case.

In 2017, two U.S. Park Police officers fatally shot Ghaisar, 25, after a pursuit on George Washington Memorial Parkway in Virginia. The agency has released few details; it was Fairfax County police who released an in-car video of the shooting taken from one of its vehicles that joined the pursuit, over the objections of federal authorities.

Federal prosecutors concluded an investigation without charging the officers, but the Fairfax County prosecutor later obtained indictments for manslaughter. The case is pending and the officers have said they fired in self-defense.

“The only reason that there’s a possibility for justice to be done there is because the Fairfax County police were following along and their dash cameras were on,” said U.S. Rep. Don Beyer, a Democrat from Alexandria who co-sponsored the legislation that would require body cameras for federal officers.

But any changes to federal law enforcement would leave out the Capitol Police, which is controlled by Congress and exempt from many transparency requirements.

“The Capitol Police don’t disclose anything; they are basically impossible to deal with,” said Daniel Schuman of Demand Progress, a civil liberties nonprofit. In the wake of the Jan. 6 riot at the Capitol, his group and some members of Congress have publicly pushed the agency to be more transparent.

Acting Capitol Police Chief Yogananda Pittman did appear before reporters in April to describe a deadly incident involving an attacker who rammed into a Capitol barricade. One officer was killed and the suspect was fatally shot by police.

Schuman believes pressure put on the agency in the wake of Jan. 6 is “the only reason” police gave a public account.

A spokesman for the Capitol Police agreed that the insurrection prompted “major changes” inside the agency. He said Pittman “is committed to improving communication, while striking the balance between transparency, accountability and protecting law enforcement sensitive information.”


“There’s always the specter of terrorism in particular and September 11,” she said, “and it really effects how much reform we can get in regards to any law enforcement secrecy.”

For now, Louis’s family is left in the dark, trying to parse blurry cellphone videos of officers surrounding him and putting him in handcuffs. The Park Police referred questions to D.C. police, who are conducting the investigation into Louis’s death.

Middleton said she had looked at photos of her brother’s body from the funeral home and counted multiple marks that appeared to be caused by a Taser, as well as bruises. But she doesn’t know what it means.

“They really haven’t told us anything,” she said. “This still doesn’t make any sense.”

Niyo: Pistons have a chance to win, grow as Summer League practice heats up