Raw video: Loggerhead sea turtle released back into wild after stint at CROW

A rare Kemp’s Ridley sea turtle in distress in the Gulf of Mexico was captured by two Lee County Sheriff’s Office deputies and delivered to wildlife rehabilitators.

After several unsuccessful attempts, Hargis was able to recover the rare and endangered species with an assist from Fort Myers Beach residents Craig and Connie Schultz.

Is red tide to blame? Sick and dying shorebirds are turning up on and around Sanibel again

While enroute to the Punta Rassa boat ramp aboard an LCSO boat, the turtle became active and began chomping at the deputies’ feet, earning the nick-name “Pacman.”

Once at Punta Rassa, officials from the Florida Wildlife Commission and the Sanibel-based Clinic for the Rehabilitation of Wildlife, took over caring for the turtle.

Biologists quickly assessed the 5- to 10-year-old female was suffering from a red tide-related issue. The officials also gave the turtle a good recovery prognosis.

And, after learning the turtle was not a male, deputies Hargis and Galloway changed her new name to “Miss Pacman.” 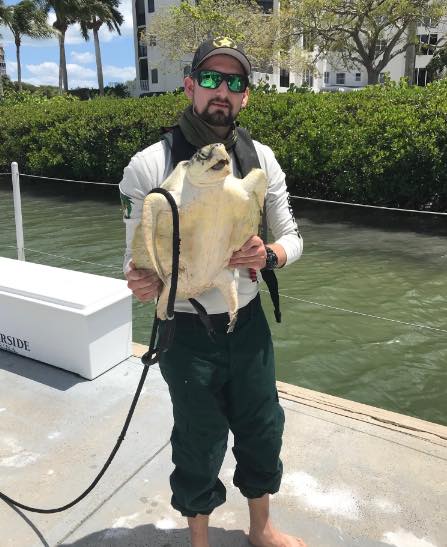