Detroit — The Red Wings found out about Sergei Tchekmarev’s death after Friday’s ragged loss against Florida.

Tchekmarev, 65, was the team masseur, an equipment manager, and generally made everyone — players, coaches, media, anyone — feel better about the day with a smile or joke.

Saturday’s 2-1 victory over Florida provided a bit of salve on the wound, both after the ugly loss and the loss of a dear friend in the locker room.

“My thoughts and prayers are with his family,” Larkin said. “I know they’re here in Detroit now with him. It was pretty difficult to be at the rink today. (I) went home last night and didn’t get much sleep and came today, and like many of you guys being in the locker room, I and the rest of the team tried to come to the rink with the same enthusiasm he had.

“Just his positivity and charisma and how much he loved being at the rink helping people, I couldn’t have loved him any more.

“We lost a great friend.”

Tchekmarev was with the Wings organization since 1998. Before that he had a long career in hockey, including working with and being part of the renowned Russian teams that dominated on the international level with future Red Wings Slava Fetisov and Igor Larionov.

Tchekmarev was popular across several eras of Wings’ teams, and his impact was felt Saturday.

“It’s certainly emotional,” coach Jeff Blashill said. “Kris Draper (former Red Wings player) sent me a text just saying ‘Let’s get a W for Cheekah” and I’m glad we did that for certain.

“In the end, the amount of love that has poured in for Cheekah has really been amazing and I really hope and pray that he felt that love when he was alive because a lot of people cared deeply about him and he was a special person.

“So, to get that win means a lot to a lot of people, a lot of Red Wings, anybody who was around him beyond just this current team. It was great.” 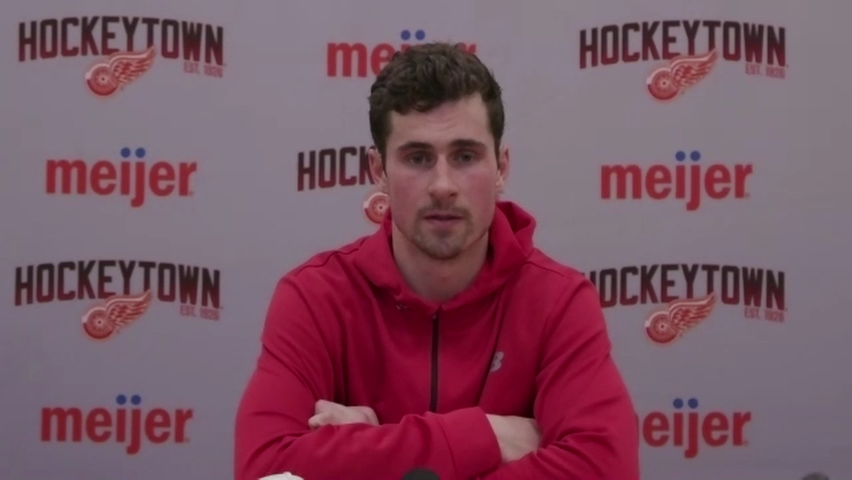 The Wings received goals from Patrik Nemeth and Mathias Brome, both scoring their first goals of the season (first of Brome’s NHL career).

To get that sort of secondary scoring was a huge plus for a Wings team that has had trouble getting any sort of scoring from anyone in the lineup.

“It’s just big to keep spreading the scoring out,” Blashill said. “Brome has had a lot of opportunities to score and some looked like they should have gone in, and they didn’t. Nemo (Nemeth) is real smart with getting into areas to shoot pucks, so good for him to get that and bury that one.”

Brome had gone without a point in 18 games, so the Wings hope it’ll relieve pressure off the undrafted free agent.

“Hopefully it takes some weight off his shoulders and he can build on that and continue to score,” Blashill said.

DeKeyser was removed from the lineup recently as he’s had a difficult time returning from herniated disc surgery that forced him to miss all but eight games last season.

DeKeyser played 12 minutes, 33 seconds and was credited with two hits and two blocks.

“It’s really hard to know where a player is at with the limited practice we have,” Blashill said. “I said to DK we’re just going to let him sit, but it’s hard to monitor his progress with no live action. This gave us a chance to go with seven defensemen and see where he’s at and he did a pretty good job. He’s a real smart player and when he’s at his best, he’s almost a human eraser, he makes up for mistakes.”

Blashill put Helm on a line with Larkin and Anthony Mantha, and the veteran forward proved to welcome addition.

“Helmer was our best player (Friday), Helm and probably Robby Fabbri had the best impacts in the game,” Blashill said. “Helmer, every line we put him on he seemed to help with his energy. When Larks and Mo can play with a guy who has that kind of energy, Helmer gets pucks for them and he’s a good forechecker and he’s at the net a lot.

“He earned the spot on that line and he did a real good job tonight.”

“Jonathan Bernier was the story,” Larkin said. “He’s on a great run here and it was great to get a win for him and how hard he played tonight.”

… The Red Wings have handed Florida two of its three regulation losses this season.