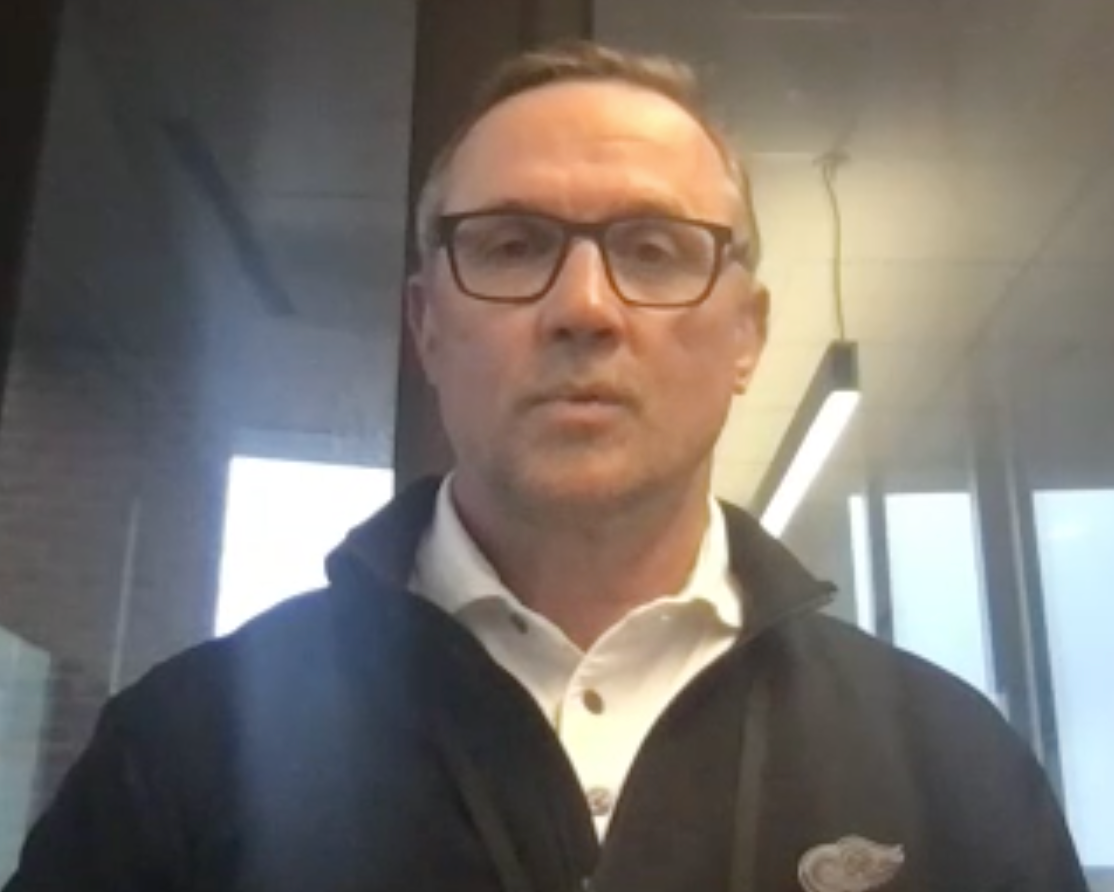 Steve Yzerman on Wings sticking at No. 6 in lottery: ‘I’m not losing a bit of sleep over it’

Detroit — As usual, the Red Wings had no luck at Wednesday’s NHL Draft lottery.

The Wings went into the televised event with the sixth-best odds to land the top pick overall — and that’s where they’ll be picking, sixth overall, after draws were complete Wednesday at the NHL Network headquarters.

Last season, the Wings had the NHL’s worst record by far, but tumbled to the fourth pick overall in the draft lottery, making the NHL tweak some regulations this season.

But general manager Steve Yzerman wasn’t in a frustrated mood Wednesday, instead concentrating on the fact the Wings likely will get another talented prospect in this draft.

“There’s no sense complaining about the system,” Yzerman said in a media chat on Zoom afterward. “Good for Buffalo. I wish them well. They’re lucky to have the first pick. We have the sixth pick in the draft; we didn’t go backward, and we’ll do our best to make a good selection.

“Whether it’s first, fifth, sixth, whatever, you have to find players in this system. It’s the same for everyone. We just have to find a way to get good players.

“There’s not much you can do about it. I’m not going to lose a minute’s sleep over it.”

Given the odds, the Wings shouldn’t have expected anything much better than what ultimately happened.

It’s the third time the Wings will pick sixth in the last four years. They selected Filip Zadina in 2018, and Moritz Seider in 2019.

Yzerman feels the Wings can get another talented player in this year’s pool in what will be an unpredictable draft.

Given the pandemic, many junior leagues all over the world either didn’t play or played a limited schedule. Scouting was difficult, or impossible, and it’s likely draft boards across all 32 teams will look vastly different.

“I’ve seen a majority of the kids in that 1-to-10 range, and we’re excited about the possibilities,” Yzerman said. “Moreso this year than any other year, you’re going to have a vastly different lists. Based on which league these kids were playing in, and how much they did or didn’t play. This one will maybe have more surprises than ever.

“I’d guess sitting at six, there are players who we think will be there, multiple players, and we’ll be excited about the pick. I’ve seen most of the kids in the top 10, who we think are in the top 10 anyway, and I don’t know what other teams are thinking, but you’re going to get a good prospect, and we’ll go from there.”

Who could the Wings select?

Some good players easily could tumble into the lower rounds simply because they haven’t played this season, and could be huge surprises in the years ahead.

“You can look at it two ways: It could be potentially tougher to find people or you might find them later,” Yzerman said. “Maybe they didn’t play much, or maybe you saw them a year ago and one of your scouts saw him a year ago and says ‘I’d really like to pick that player.’ You’re going to get lucky, or unlucky.

“(But) I do think there will be some real good players, for whatever reason, that are picked later in the draft. Maybe they didn’t play at all, or maybe they played a little bit or played in a men’s league or hardly got on the ice, and you’re going to wake up in three  years and say I had no idea this guy was going to be this good’,”

With technology the way it is, scouts have watched a lot of video, and they still have assessments of players from a year ago. But, it will be different leading up to this draft.

“We’ve had access to watch it on video; that’s not ideal, but you do the best you can and make sure you know the players,” Yzerman said. “That’s what we’ve done. Every team is in the same boat, and we try to find some players based on what we’ve seen at this stage. We’re prepared as we can be.”

The Wings will not concentrate on one position with the sixth pick. Organizationally, they need depth at every position.