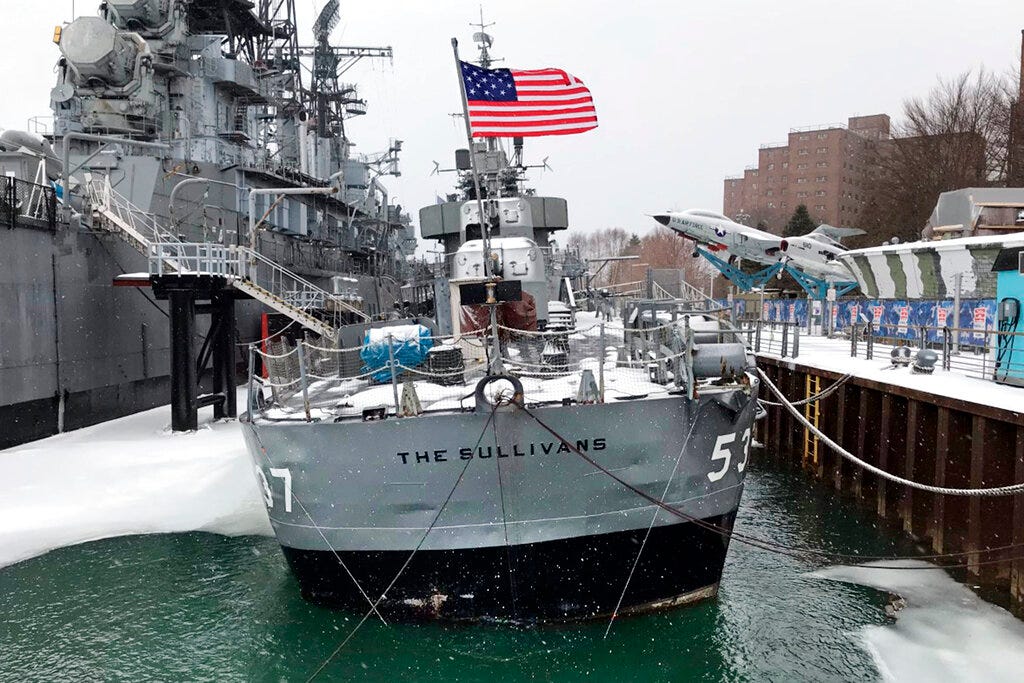 Buffalo, N.Y. – Keeping the Buffalo & Erie County Naval & Military Park from going under during the pandemic has been hard enough without also having to worry about keeping one of its star attractions afloat.

After losing 87% of its revenue because of COVID-19 closures and cancellations during the past year, the park recently discovered the destroyer USS The Sullivans taking on water and listing at its dock in Buffalo’s inner harbor.

The 78-year-old decommissioned vessel is named in honor of the five Sullivan brothers from Waterloo, Iowa, who were killed in action when the USS Juneau was sunk by the Japanese in the South Pacific during World War II.

“She was built to last about 20 years. Destroyers by their very nature, are built with a very thin layer of steel because they’ve got to be fast and maneuverable,” said Paul Marzello Sr., president and chief executive of the park. “Seventy-eight years is a long time to keep these ships in condition to be floating, especially when we want to use them as a museum piece and use them as an educational tool.”

Crews from the military park couldn’t immediately board the leaning vessel because the gangways had been damaged by a winter storm. When they did, they found that 15,000-20,000 gallons of water had poured in through three holes in its hull.

“The holes can be anywhere from the size of a dime to a quarter, but it doesn’t take much when it’s below the water line,” Marzello said. “It’s just coming in full bore, so those are the scary ones.”

Emergency repairs are under way to pump out the water and plug the holes. Officials estimate it will cost $1 million to permanently repair a hull weakened and damaged by the freeze and thaw of decades of winters.

It would have been a costly undertaking for the nonprofit park and museum even before the pandemic all but wiped out its revenue stream.

“It killed the summer as far as admissions and tours, not to mention what it does to gift shop revenue, the restaurant revenue. It goes right down the line,” Marzello said.

The granddaughter of Albert Sullivan, the youngest of the brothers and the only one to have a child, is scheduled to kick off a St. Patrick’s Day fundraising effort Wednesday being led by Washington, D.C.-based developer Douglas Jemal.

Kelly Sullivan was 5 years old when she took her first plane ride to Buffalo to see the ship become a museum. Since then, she has been a regular at reunions held by sailors who served on it and their families.

“I didn’t grow up in the big Irish Catholic family that I would have had if even one of the boys had survived, but I have my Sullivan sailors family,” Sullivan said as she traveled to Buffalo from Waterloo, Iowa, where she teaches third grade.

“It’s an artifact that celebrates not just Sullivans, but it honors all of the men and women who have served our country,” she said.


The USS The Sullivans is one of four decommissioned Naval vessels at the park, along with the USS Little Rock, the last surviving vessel from the Cleveland-class of light cruisers; the USS Croaker, a Gato-class submarine on the National Register of Historic Places, and the PTF-17 that was used as a high-speed reconnaissance and patrol craft in Vietnam.