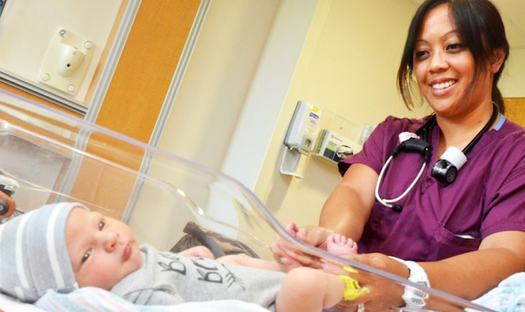 More than 3 million children in Texas rely on Medicaid, and another 400,000 on CHIP, for health coverage. (U.S. Navy)

AUSTIN, Texas – After more than a decade of progress getting health coverage for more children in the U.S., a new report shows that nationally, more than 800,000 fewer children were enrolled in federal health programs at the end of 2018.

She says the new data is cause for alarm because it comes on the heels of the first reversal in coverage progress reported just a year ago.

“If you’re concerned about the future of Texas and our competitiveness and to have a strong, well educated work force, you have to be concerned with child well- being, and public schools are a part of that, and so is health care,” she stresses.

More than 3 million children in Texas currently are covered through Medicaid and another 400,000 through CHIP.

The Trump administration attributes drops in coverage to a strong economy and lower unemployment, factors that tend to move people from government programs to employer-sponsored health insurance.

Dunkelberg says many Texas families earn too much to qualify for Medicaid, but can’t afford employer-subsidized insurance, which costs up to a quarter of their gross income.

Report author Tricia Brooks, a senior fellow at the Georgetown University Center for Children and Families, says employment and economic growth have been steady over the last decade, but the positive trend hasn’t translated into coverage gains for children.

“There was no surge in employment or real wage growth that would account for the enrollment plunge in 2018,” she points out. “There also is negligible evidence that any economic factors have substantially increased access to affordable private or employer-based coverage for low- to moderate-income families. “

The report suggests other factors, including budget cuts to services helping families navigate the complicated enrollment process, have contributed to a drop in coverage.

Dunkelberg adds the Trump administration’s immigration policies also have created a chilling effect, and many Texas parents have to make difficult decisions.

“I can allow my U.S. citizen child to enroll in this health insurance program, or I can choose to stay out of it because as a family we are afraid that it’s going to keep mom or dad from getting their permanent resident status or becoming a U.S. citizen,” she states.

Disclosure: Georgetown University Center for Children & Families contributes to our fund for reporting on Children’s Issues, Health Issues. If you would like to help support news in the public interest, click here.

‘Resilient’ Pistons battle back in second half, fall short to red-hot Suns