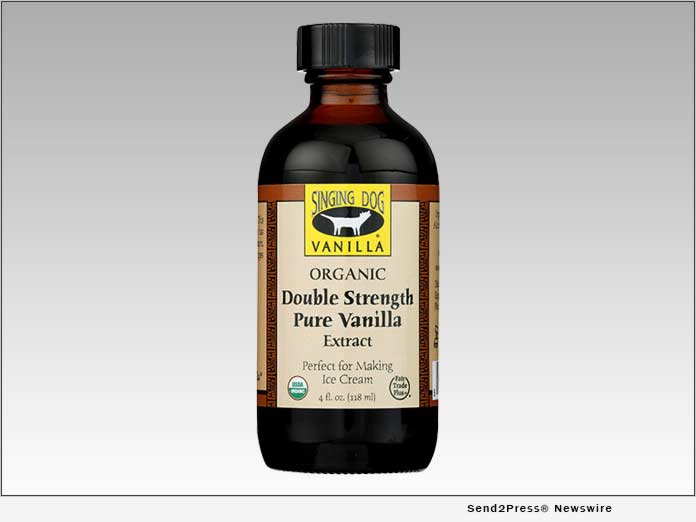 The company decided to release a 4-ounce retail version of their double strength vanilla extract after it was recommended by Tyler Malek in his new book “Salt & Straw Ice Cream Cookbook” https://saltandstraw.com/products/ice-cream-cookbook. When homemade ice cream fans read the book, they started emailing and calling Singing Dog Vanilla asking to purchase their double strength vanilla extract. In response, they quickly made it available on their website with a plain-white label and then went to work preparing for a proper launch.

“We are grateful to the Salt & Straw folks for mentioning us in their book. It was a nice surprise when people started calling,” said Marty Parisien, Co-founder of Singing Dog Vanilla. “We had to move quickly to get this product on the market because of the demand from fans of the book.”

Standard single strength vanilla extracts, also called single-fold, are made with 13.35 oz of vanilla beans per gallon of 35% alcohol. Double-Fold vanilla is preferred by ice cream manufactures because it has twice the vanilla beans within the same 35% alcohol, thus reducing the amount of liquid per ice cream batch.

Founded on April Fool’s Day in 2004, Singing Dog Vanilla has offices in Eugene, Oregon and Phoenixville, Pennsylvania. They partner with over 400 vanilla-growing families in Indonesia to bring organic vanilla products to food manufacturers, bakeries, scoop shops, restaurants, and breweries. Singing Dog Vanilla also has a full line of retail products sold in natural grocery stores across the USA and internationally. Profits are shared with their vanilla farmers and employees.