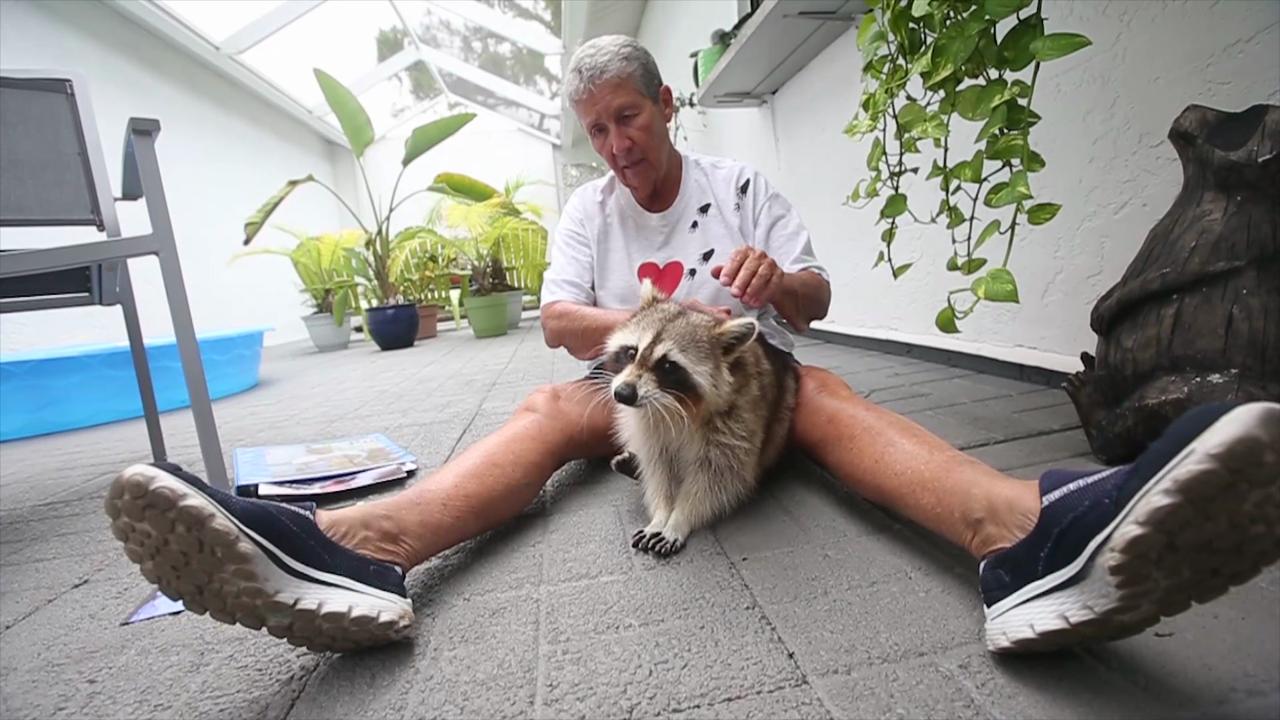 For Trouper, love truly is blind

Dorothy “Dot” Lee is the caregiver for Trouper, an 8-year-old raccoon who was repeatedly clubbed by a golfer as a tiny kit. Lee just got a license that allows her to take him throughout the U.S., and has hopes of taking Trouper’s message national.

A beloved creature who taught children throughout Southwest Florida to respect life has died a dozen years after he captured the heart of a woman who met his every need.

Trouper the Raccoon died Sunday at the age of 12 in the arms of his lifelong caregiver Dorothy “Dot” Lee, of Fort Myers, according to a Wildlife Education Project news release.

Trouper and Lee  educated children and adults around the world on their core teaching, “Extend Respect and Kindness to All Living Things.”

In 2009, when Trouper was just eight weeks old, he survived an injury from a human which left him blind, brain damaged and unable to feed or defend himself. Lee, an animal rehabilitator, rescued Trouper and nurtured him to survival.

Although Lee rescued Trouper, she regularly says, “Trouper rescued me,” the release states.

Their work together helped inspire the founding of the Wildlife Education Project and its core principles, which are that hopefully through fun, interactive, educational program could intervene and make a difference in the protection and preservation of all living things.

Lee is a licensed wildlife rehabilitator, retired physical education teacher with a Master’s Degree in Special Education from the University of North Carolina and a former Special Olympics swimming coach.

She has dedicated her life to the rehabilitation of wildlife and advocates for the humane treatment of wildlife and educates the public to respect raccoons as well as all wildlife as we co-habitat in shared spaces, the release states.

Over the years, the duo has caught international attention, and have been featured in many publications including Nat Geo WILD’s “Unlikely Animal Friends,” People Magazine, All Creatures Magazine, Guideposts Magazine and USA Today.

The beloved raccoon also has his own children’s book, Trouper: The True Adventures of a Blind Raccoon, by Kyle L. Miller.

“For more than 12 years, Trouper and Dot carried their message to thousands … ​Their hands-on presentations that carry one key lesson ­– RESPECT – spread awareness and joy … His legacy is felt in the hearts of everyone who has ever met him, as he was truly one of a kind,” the release reads.


In lieu of flowers, the Wildlife Education Project asks that a tax-deductible donation be considered to honor the memory of Trouper and show support to Lee.

Donations can be made online via GoFundMe or at www.WildlifeEducationProject.org.