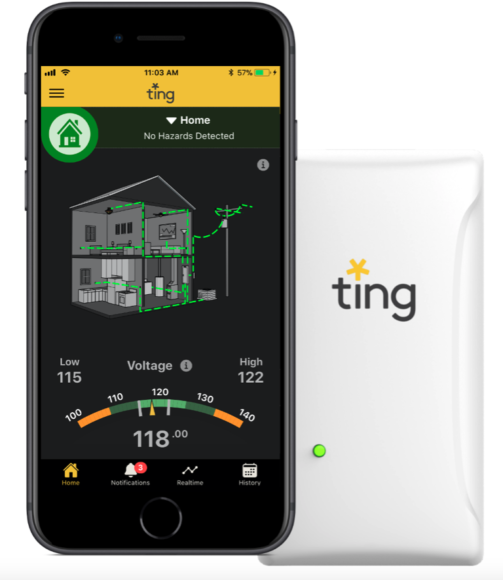 State Farm is sending sensors that can detect hazards in electric wiring to 40,000 homeowners in California, Arizona and Texas as part of a pilot project that will measure potential savings and customer acceptance.

Mike Fields, a State Farm vice president and leader of the insurer’s Red Labs team, said during an interview Friday that customers who sign up for the project will receive a Ting sensor for free and up to $1,000 for electrical repairs if any problems are detected. The devices, manufactured by Whisker Labs, retail for $349. One Ting plugged into a wall socket can detect loose connections, damaged wires or faulty appliances.

“We know it works in the home,” Fields said. “We want to know the acceptance rate for homeowners.”

State Farm said electrical fires make up 13% of all home fires and cause about $1.3 billion in damages annually in the United States. Electrical fires cause $100,000 in damages, on average.

“No one wants to see those fires,” Fields said.

The Ting software detects tiny electrical arcs, which are precursors to imminent fire risks, Whisker Labs says on its website. If a malfunction is detected, the Ting device sends the homeowner an alert via smart phone.

“The device is simple,” Fields said. “We wanted to wait and make sure that there was an easy and simple way for customers to install it.”

Fields said the Ting device can detect defects not only in wiring inside the home, but also in the transformer outside. That device converts electricity from high-voltage power lines to a lower voltage for household use.

Often transformers are mounted on power poles and can cause wildfires if they shoot off sparks. Investor-owned utilities in California have been ordered to pay billions for damages caused by wildfires ignited by their malfunctioning equipment.

Fields said State Farm chose to market the pilot project to policyholders in areas of California, Arizona and Texas that have a greater wildfire risk specifically to gauge its impact. He said if a Ting device detects a problem with a transformer, it will alert the homeowner, who hopefully willnotify the utility.

Field said State Farm started the project in 2019 by installing 2,000 Ting devices in homes owned by its employees and agents. Since September, the carrier has sent another 11,000 sensors to customers.

He said only about 22 alarms have been set off so far. He said 10 of those alerts were for problems with transformers. The Ting devices also detected an electric heater that was overheating, a sparking outlet, and defective circuit breakers.

State Farm Ventures, the carrier’s investment arm, has an ownership stake in WhiskerLabs, although Fields said that is separate from the partnership for the pilot project. The company, headquartered in Germantown, Md., launched Ting in 2017. The company said that while fundamentally different, the closest market analog to Ting for electrical fire safety applications is the Arc-Fault Circuit Interrupter (AFCI), which was incorporated into the U.S. electrical code in 2010. AFCI’s have a global market of $4 billion, WhiskerLabs said in a press release last year.