OAKHURST — Twenty five summers ago, when the Yosemite Jazz Band first began playing on the patio at The Pizza Factory, Berl Howell and his buddies Ted Strauss and Jimmie Kirin had no idea their Thursday night gigs would become an Oakhurst tradition. 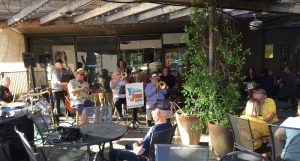 “Back then, we just enjoyed getting together and practicing our music in public,” Howell says. “They used to pay us with a free pizza and pitcher of beer.”

Howell, who is 75, had just moved to the Yosemite area from southern California.

“I ran an auto and air conditioning shop for 25 years in Ventura and this guy I knew there had a band that played Dixieland. The music just spoke to me. It was so upbeat. So after I came to North Fork, I decided to find some guys and start a band here.”

“We started playing at The Pizza Factory in 1994,” Howell says. “At first, we called ourselves the Yosemite Dixieland Jazz Band. But after recruiting some more members and branching into other kinds of jazz, we shortened the name to Yosemite Jazz Band.”

“None of us take ourselves too seriously,” Howell adds. “We just enjoy playing this kind of music and putting a smile on peoples faces.”

“Honestly, I didn’t realize this was our 25th year playing [at The Pizza Factory],” Kirin says, proving the point. “We should have a party to celebrate.” Last Thursday night, as usual, the band entertained a pizza-munching crowd of several dozen diners with its blend of Dixieland, early swing, gospel and traditional jazz.

It happened to be the 75th anniversary of the D-Day invasion and a 95-year-old World War II veteran sat at one table tapping his feet while enjoying the band’s set, which included rousing renditions of the “Washington and Lee Swing,” “Sugar Blues,” “Pennies from Heaven,” “Hello Dolly,” “When I Take My Sugar to Tea” and the finale, Louie Armstrong’s “What a Wonderful World.”

Howell describes the show as “a high-energy, enthusiastic style of music that encourages audiences to stomp their feet, clap their hands and sing along.”

Jeff Gurule, who plays banjo and guitar and works as a project manager for a local environmental consulting firm, has been a member of the group for 15 years.

“I really enjoy getting together Thursday nights and playing with these guys,” he says. “It’s been a wonderful opportunity for all of us to hone our craft.”

Gurule’s 14-year-old daughter, Elva, is an incoming student at Yosemite High and aspiring trumpet player who has been sitting in with the band recently during their Thursday night gigs.

“She really enjoys it and is getting to be a pretty good trumpet player,” Gurule says. Trombonist Pat “Chops” Mierkey, 77, is a retired music teacher whose professional musical career actually started when he was 14 and playing with a polka dance band in Wisconsin.

Mierkey is one of the band’s more talkative and animated players. The band’s tip jar is perched next to his music stand and Mierkey barely avoids knocking it over as he swings his trombone slide from side to side.

“We make just enough to pay for gas and keep our instruments clean,” he jokes.

“She was born exactly a year after all the bombs went off at D-Day,” he says. “She’s out there tonight so let’s all sing a big happy birthday to her.”

And when she’s “not too busy,” Howell says, local actress and singer Jennifer Janine also performs with the band. Howell estimates the band currently plays about 25 shows a year. They’ve performed at the California Mid-State Fair in Paso Robles and before a crowd of more than 1,500 at the Sacramento Jazz Jubilee.

Besides their standing June-October Thursday night gigs at The Pizza Factory, the band also plays regularly at the Golden Chain Theater and The Pines Resort at Bass Lake as well as at area schools, for local service clubs and churches.

Through the years, the group also has cut a handful of CDs with titles like “Will Play for Food,” “Ain’t Got a Lousy Dime” and “Tell ’em Joe Sent Ya.”

“After all these years, we’re still doing it for the love of the music,” says Howell. “We’d be playing here every Thursday night even if they were still just paying us with a pizza.”