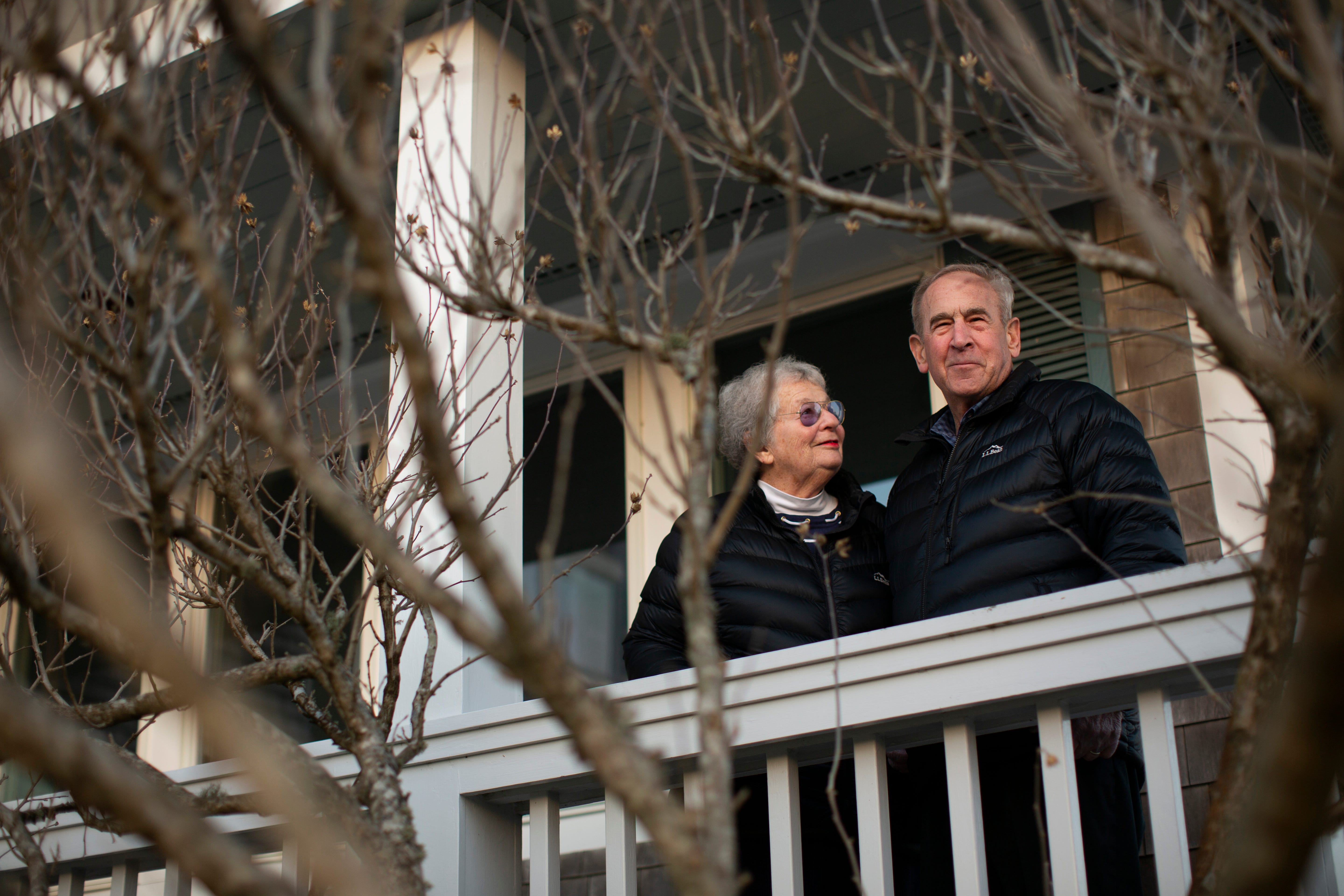 Roz Bernheimer and her husband are 80 and have spent the past year sequestered at home, barricaded from most of their children and grandchildren as they awaited a vaccine. They finally got it, with the second shot taking full effect this week, meaning they are unlikely to become sick from COVID-19.

Bernheimer, who lives in Newton, Mass., feels tremendous relief, but that doesn’t mean she is ready to open the door to unmasked, indoor visits with unvaccinated people, including some of her children and grandchildren who are pushing to see them.

After the pandemic began, many Americans, especially the oldest and most vulnerable, clung to the hope that a vaccine would return them to pre-coronavirus life. But after a year of surges, variants and conflicting or revised opinions from medical authorities, many are questioning – and, in some cases, arguing with loved ones about – whether the vaccine will be their golden ticket back into the wider world.

It is still unclear whether vaccinated people can transmit the coronavirus, and new guidelines released this week from the Centers for Disease Control and Prevention did not clearly delineate between what it is and is not safe for them to do. The guidelines said people two weeks past their final shot may visit indoors with unvaccinated members of a single household without masks or distancing. But many extended families include more than a single household. And the guidelines still discourage visits involving long-distance travel.

The new guidelines “make me more confused than not,” Bernheimer said. “It seemed to say one thing in one place, and then if you read down further, it negated what you had read.”

Unlike childhood vaccines, which provide lifelong immunity, the coronavirus vaccines are more like the flu vaccine, which needs to be administered every year and has varying degrees of effectiveness.

“For so long, the vaccine was presented as a sort of ‘get-out-of-home’ card,” said Jennifer Reich, a professor of sociology at the University of Colorado at Denver and author of “Calling the Shots,” a book about people who reject vaccines.

But the promise of the current vaccines has been clouded by the rise of new variants that may elude them. And with four-fifths of Americans yet to get a first shot, vaccinated people have a hard time knowing how to protect themselves and their family members.

“People love simple answers, but public health is complicated and we don’t have all the information,” said Ruth Nemzoff, a resident scholar at Brandeis Women’s Studies Research Center who has been conducting workshops with grandparents around the country since the pandemic began.

People who live far away from loved ones have found that different states have different rules about quarantines. Different doctors have different opinions on what is safe. And people’s own inner compasses can vary wildly from those of their loved ones.

“It’s led to some rifts within families,” said Jessica Calarco, an associate professor of sociology at Indiana University who has been following 250 mothers of young children for over two years. “There are so many different opinions of what’s safe.”

Bernheimer said she is more worried about transmitting the coronavirus to unvaccinated family members than she is of catching it from them. So Passover with her four children and seven grandchildren will be on Zoom again this year, and aside from a daughter and granddaughter who have bubbled with them, in-person visits will continue to be outdoors and masked.

That has not gone over well with all family members.

“Some of them even felt like maybe we were being punishing, like we were being ridiculous and we were depriving them of the chance to see us,” she said. “Others are saying, ‘We’re really proud that you’re not backing down on the bullying.’ ” Bernheimer’s children declined to be interviewed for this story.

In other cases, it is the vaccinated grandparent who is more eager to relax the rules. Suzanne Grenager, 78, of Mill Valley, Calif., has gotten her second dose, and has started going to the grocery store, Pilates trainer, and hair salon, and socializing indoors and unmasked with other vaccinated people.

She also does so with unvaccinated people if they are comfortable with it. But her daughter-in-law still wants to meet only outdoors with masks and social distancing until she, her husband and their three sons have been vaccinated.

“If it were all up to me, I think I’d be tempted to be a little bit more lenient about it,” Grenager said. “I don’t think anyone’s going to die,” she said, but added that she respects her daughter-in-law’s position.

Grenager’s vaccinated status has meant revisiting protocols the family had painstakingly hashed out earlier in the pandemic, said her daughter-in-law, Heather Hughes, 54, who lives nearby.

“Those old resolved dialogues are exacerbated by the new freedoms that these older people perceive that they have with their new vaccines,” Hughes said, adding that after a year of hearing about how much more risky covid-19 is for the oldest populations, it might be hard for older adults to now think of younger ones as vulnerable. “Whatever she does affects us. Her being more exposed exposes us more.”

Usually when people’s ideas of safety are in conflict, “families have made the decision that is the most risk-averse decision,” Calarco said. But as families weigh the pros and cons, health and safety can be defined in many ways. “Certainly many parents see a risk for their children of not seeing grandparents for so long, and certainly many grandparents feel a deep sense of loss of not being able to see their grandchildren.”

For parents who rely on outside help for child care, the calculus can be even more complicated.

“For those who have babysitters of any type or send their kids to day care, those day cares have rules, and if you see anyone outside your pod for any reason, you have to isolate for a week,” Nemzoff said. “Or the babysitter may say, ‘Hey, wait a minute, I don’t want you introducing more people to my pod.’ “

Patsy Goodman, 72, of Silver Spring, Md., had to stop indoors visits with her twin 6-year-old granddaughters, whom she was helping care for, after they went back to in-person private school in the fall.

Goodman, who has a heart condition, has had two shots, which make her feel “like a huge weight has been lifted.” But her granddaughters’ school has restrictions against seeing anyone outside their household. “As much as we want to see the girls, we don’t want to endanger their being in school,” she said.

After reading the CDC guidelines released Monday, she and her husband and their son and daughter-in-law decided they will form a pod as soon as all four adults are vaccinated.

Some older people are still worried about protecting their own health, even after getting their shots.

Edith Edmunds, 95, of Halifax, Va., and her daughter received their second doses of the vaccine recently, but she still hasn’t socialized with anyone outside of her household.

She plans to have some family members visit in April, but they will stay “only on the porch, not in the house. They will have to have their masks on.” Edmunds said. “I’m not ready to have people going in and out of my house.”

Her daughter, Amy, 63, who lives with her, agrees that it’s best to wait. She’s worried about her own health, too, as a stroke survivor. “I’m very comfortable with embracing 2022 as a goal post,” she said. “I think we’ll be wearing masks into next year.”

But not all older people are as resistant to reuniting with relatives. Jen Morales, 52, of Vienna, Va., was taken aback last month by a text from her 80-year-old mother.

“I feel soooo relieved!!!” her mother, Sally Morales, wrote in the text, after saying she and her husband had received their first vaccine doses and planned to get their second doses in four weeks. “When we’re finished we’ll come and visit you.”

Morales and her teenage children longed to see her mother, who lives in Rochester, N.Y., But Morales, communications director for the Infectious Diseases Society of America, had been working on a news release about the latest variant just before receiving her mother’s text. She worried the vaccine wouldn’t protect her parents from the new strains, and that traveling to Virginia would put them at risk.

“That would be great,” she replied. “Let’s wait and see what we know about the variants. Fingers crossed.”


“Oh boy. That’s right,” her mother responded. “I didn’t think about that.”

Her mother was disappointed but said she trusted her daughter’s judgment.

“I just couldn’t live with myself if something happened to my mom,” Morales said. “I just feel like we can’t let up yet. We’ve waited this long; let’s just hold our breath a little longer.”