Roaring fans at PBIA, roads blocked for the motorcade, Palm Beach frozen in place, electric corner rallies and long holiday visits with plenty of Mar-a-Lago parties. Will it all come to an end soon?

For four years, Mar-a-Lago served as a tropical sanctuary for President Donald Trump — a glamorous getaway where adoration of the 45th president began the moment he stepped off Air Force One at PBIA, followed him along the motorcade route, onto the dining patio at his private club and then to his suburban West Palm Beach golf course.

“My theory is that at Christmas time he goes to Mar-a-Lago. I think he will stay there through the inauguration. I would not be shocked if he will not show up to the inauguration either,” Cohen said in a recent interview with MSNBC.

Whether Cohen is right or not, the life Trump knew as president is scheduled to come to a close at noon Jan. 20. And, on that day, so will the life Palm Beach County residents knew the past four years of presidential visits.

But exactly how those changes will manifest, from road closures to diverted airliner flight paths, remains to be seen.

One certainty, however, for Mar-a-Lago when Trump leaves the White House: Gone will be the helipad that Trump’s attorney convinced the Palm Beach Town Council was necessary in 2017 because Trump was president.

Talk that the helipad would be used to ferry Trump to and from Palm Beach International Airport and Mar-a-Lago to avoid road closures turned out to be just talk. It was only used on occasions, such as when Trump flew to Lake Okeechobee to inspect the Herbert Hoover Dike in early 2019.

More: Use of helipad at Mar-a-Lago ends with Trump’s term on Jan. 20

The White House and the Marine Corps, which flies presidents aboard Marine One, the presidential helicopter, both denied asking for the helipad. Palm Beach does not allow helipads or helicopters, fearing the island could end up like other posh communities where helicopters buzz the super-rich in and out.

The council made an exception for Trump and approved the 50-foot wide, 8-inch-deep concrete helipad on the west lawn of Mar-a-Lago with conditions: that it only be used for official presidential business and that it would be removed when Trump left office.

By April 2017 a Trump corporate helicopter emblazoned with TRUMP was using the helipad. Another Trump helicopter sat on the pad for over a week during the 2017 holidays. And Eric Trump posted a video of the corporate chopper landing on the Mar-a-Lago helipad on social media. 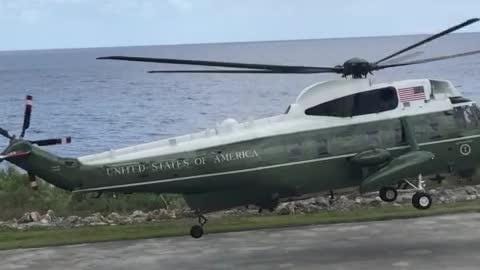 During the short news conference on the shores of Lake Okeechobee, Trump talked about Herbert Hoover Dike restoration, but focused mainly on immigration.

Other post-presidency security protocols are not yet known, including road closures. Trump’s typical Friday evening arrivals created rush-hour traffic jams on the eastern end of Southern Boulevard and Interstate 95 interchange.

On the island, the closure of South Ocean Boulevard for nearly a mile stretch near Mar-a-Lago effectively cut the island of Palm Beach in half. The road is the only north-south thoroughfare in that narrow stretch of the island.

The only detour available requires drivers, cyclists and pedestrians to leave the island via one of Palm Beach’s three drawbridges and use a road in West Palm Beach to travel north or south before getting back on the island.

Will Trump stay longer on his visits to Mar-a-Lago when he’s out of office?

Most of Trump’s nearly three dozen presidential visits have lasted just two or three days, with longer visits over the Thanksgiving and Christmas holidays. However, since Trump declared Palm Beach his legal residence in September 2019, no one knows how long his visits will last when he is a former president — or if he will simply move into Mar-a-Lago during the six-month-long winter social season. The club closes during summer from Mother’s Day to Halloween.

An official in Palm Beach said as of Monday, the town had not been contacted about road closures.

In the upscale Washington neighborhood where former President Barak Obama and his family live there are checkpoints at each end of the block, according to the Washington Post. Unlike Mar-a-Lago, which is enclosed by a tall wall and the Intracoastal waterway on the most exposed west side of the estate.

Under the Former Presidents Act, the Secret Service provides lifetime protection for former presidents, their spouses and children under 16. But the security is less intense than what’s needed for sitting presidents. A spokesperson for the Secret Service declined to comment on road closures after Trump leaves office in January.

Another unknown is whether the Federal Aviation Administration will close airspace near Mar-a-Lago when Trump visits as a former president.

If air traffic is not diverted when Trump visits as a former president, commercial jets will resume flying directly over Mar-a-Lago — as often as every 10 to 15 minutes. The jets are so loud that it is nearly impossible to hold a conversation on the outside dining terrace and pool area at Mar-a-Lago, where big-ticket fundraisers and events are held.

To the chagrin of islanders, it looks like the ‘Palm Beach Pause’ will be back

Palm Beachers have dubbed the interruption “the Palm Beach Pause.” Trump was so infuriated by the noise and exhaust from the jets that he filed a lawsuit against Palm Beach County.

A spokesperson from the Federal Aviation Administration said the FAA issues temporary flight restrictions at the request of the Secret Service. However, no flight restrictions were issued when Obama recently flew to Miami to speak at rallies for president-elect Joe Biden.

“For operational security reasons, the Secret Service cannot discuss specifically or in general terms the means, methods or resources we utilize to carry out our protective mission,” an FAA spokesperson said.

Trump will no longer fly on Air Force One when he leaves office. When it comes to travel, former presidents either travel on private jets or can fly commercial. Former President Jimmy Carter is the only recent ex-president to fly commercial. He and former first lady Rosalynn Carter few coach to attend Trump’s inauguration in Washington, D.C.

Trump has had a fleet of his own aircraft for years, including a 757 Boeing, dubbed Trump Force One. Before becoming president, the red, white and blue jet frequently sat on the tarmac for private planes on the south side of PBIA, positioned so that drivers on Southern Boulevard could not help but notice the jet, emblazoned with TRUMP on the side.

Trump likely will not be welcomed by dozens of fervent fans, as he usually was when Air Force One arrived.

There are no plans yet for how and where Trump will arrive at the airport once he’s out of office. However, current airport policy prohibits the public from secure areas, such as the tarmac where private jets, such as Trump’s, are parked.

“It’s kind of speculative,” said airport spokeswoman Lacy Larson. “Nobody is allowed on the secure side without coordinated efforts by security.”

Some of perks that former presidents receive: pension, travel expenses

As for his retirement benefits, under the Former Presidents Act, Trump will receive a pension of $219,200, Trump has donated his annual $400,000 salary as president to various government agencies. It is not known if he will also donate his pension.

Other perks available to former presidents include office space and staffing allowances, health benefits and some travel expenses. Money to transition back to private life is available for seven months, under the Former Presidents Act.

Palm Beach County Sheriff’s Office deputies and local police also won’t be making the overtime they have during the last four years. Local governments and law enforcement spent $13.7 million to protect Trump during his first 27 visits to Mar-a-Lago. The federal government has reimbursed most of the money.

Finally, there is the question of what happens to the hundreds of Trump fans who lined the motorcade route from PBIA, or stood on “Trump Corner” at Military Trail and PGA Boulevard in Palm Beach Gardens on Friday nights.

Willy Guardiola, the man who helped grow the weekly Trump flag-waving events at “Trump Corner” at Military Trail and PGA Boulevard from a few dozen to a thousand or more every Friday, said “right now, we’re at a standstill.”

Guardiola is convinced Trump will come out the winner after legal ballot battles are done. But he and his crew won’t be back at the corner. More than 1,300 Trump supporters showed up several weeks ago and skirmishes broke out with a much smaller group of Biden supporters.

Guardiola blames the Biden supporters and said a local business owner on the corner has asked him to stop.

“As of today, there are no more rallies on Trump Corner,” Guardiola said. Asked what — if anything — Trump supporters would do should the president lose, Guardiola did not have a plan.