The FSW School of Education hosted a teacher job fair for its upcoming graduates on Friday, March 26, 2021, in Fort Myers.

For three decades, Whitney Treloar listened to the cons about going back to college.

She had three kids. She wasn’t all that familiar with the latest technology. What was one more year?

But in 2017, the Naples resident signed up for her first full semester of classes at Florida SouthWestern State College — a move that would put the 52-year-old on a path to becoming a registered nurse.

On Friday, she’ll be one of 938 students who are eligible for the school’s in-person graduations. The events will be spread among three ceremonies, where graduates can bring two guests, and will be livestreamed.

Friday’s ceremony serves as “proof positive that I stayed the course,” she said.

After graduating from high school in the ‘80s, Treloar went off to a private college with a dream of becoming a broadcast journalist or a musician. But those plans came to a halt when she became pregnant with her first child, Jordan, who is now 31.

She dropped out to work odd jobs as a single mom and married 10 years later. The next 20 years were spent as a homemaker, and she became a mom to two more children: Anna, who is now 20, and 16-year-old Gabe.

But she realized how unhappy she was at her 30-year high school reunion in 2017.

In February of that year, her youngest child came out as transgender with her oldest two identifying on the LGBTQ+ spectrum. The news was a struggle for her spouse, and Treloar felt unsupported by her church.

Seeing how happy other people were at her reunion spurred Treloar to seek changes in her own life. Soon after starting fall classes at FSW, she and her kids fled their toxic home situation, moving into a shelter for abused women and children.

“When I first signed up for classes, I came from a nuclear, one-income family, and it wasn’t good, but it seemed stable from the outside. That was August. By November, I moved out with the kids and pets and things went haywire,” she said. “It was ugly and scary.”

But she soon found the support she needed.

Financial aid, scholarships and grants covered Treloar’s tuition, books and uniform fees, and FSW helped her with in-class accommodations to address her anxiety and ADHD, or attention-deficit/hyperactivity disorder.

She also tapped into mental-health services.

Treloar and her children stayed in the shelter for seven months before qualifying for transitional housing, where they stayed two years. When the family moved into their own place, she went to work nights for the NCH Healthcare System.

Then the pandemic hit.

She went on leave from work, her coursework went virtual, and FSW pivoted to simulation-focused drills for nursing students as hands-on work with patients was nixed. Her youngest also was caught up in the school closures that led to learn-from-home orders.

Despite the extra challenges, COVID-19 didn’t stop Treloar from pushing ahead.

She finished her associate’s degree in nursing in 2020 and was picked to give a speech during the virtual pinning ceremony.

Immediately, she began studying for the National Counsel Licensure Examination and was given approval by the college to chip away at her bachelor’s degree in nursing. After passing the RN licensing test last summer, she took a job at Landmark Hospital in Naples.

Now, almost four years since her story at FSW began, Treloar is graduating with her bachelor’s degree and has plans to keep on learning.

Her advice to others who are on the fence about going to school: “Just do it.”

“Don’t think too much about the pros and cons. I didn’t pay attention to the pros because the cons were so loud, and then I stopped listening to the cons and changed my focus.”

Graduating from college wasn’t something Sajin Maharaj, 23, thought he could do.

“I had a lot of people telling me I’m not going to be anything, that I’m going to be on the streets my entire life — that or in jail,” he said.

But FSW changed his story.

“Once I lived on campus and met people in the school, I found that they all believed in me, and that’s what helped me flourish as a person,” Maharaj said. “This has been such a great opportunity.”

Maharaj, who is originally from Hallandale in southern Broward County, came from a toxic home life.

When he was 11, his mother moved with her four kids into a one-room apartment in New Jersey. She was studying to become a nurse, but their neighborhood was rough and run by gangs.

After high school, he enrolled in a nearby community college, but Maharaj hated the experience. In 2018, while looking around for other schools, he came across FSW’s website.

Two weeks later, Maharaj moved into an off-campus apartment in Fort Myers and was enrolled in his first classes.

Things started off “a little rocky,” with Maharaj needing to take three buses to campus because he didn’t have a car. Often, he would enroll in three classes before withdrawing.

Maharaj saw himself as “stuck” in his old ways, but that changed once he moved into Lighthouse Commons, the dorm at FSW’s campus. People, he said, started to ask after him and wanted to help him succeed.

Today he is involved with FSW’s Active Minds chapter, which focuses on student mental health, and he works as a resident assistant in the dorm.

“FSW — I love that school,” Maharaj said. “It really makes me feel like I’m home.”

Maharaj has also enticed some of his siblings to continue their education in Fort Myers. Brother Sanjay, 21, is his roommate in the dorm, and 17-year-old sister Sajal starts in the fall.

In the fall, he will begin studying biology at Florida Gulf Coast University. He wants to go into the medical field, just like his mom, and his goal is to become a doctor.

“If I can be as half as good as my mother, I’ll be happy,” Maharaj said.

Teaching that dreams can come true

Amanda Jenner, 25, knows her life will change greatly after graduating Friday with a bachelor’s degree in education.

“I’m excited but also nervous,” she said, adding that her future hinges on interviews and landing a teaching job.

Already, she has a provisional contract with Lee County public schools; she earned the contract during a job fair at FSW at the end of March.

Thinking about how far she has come in life gives her butterflies.

When she was 2, Jenner was diagnosed with autism spectrum disorder.

Her parents, Lisa and Mike, advocated for her, pushing teachers to challenge her more. It wasn’t until her third-grade year when a teacher told her, “Let’s take a chance.”

“I was touched,” Jenner said. “No one besides my parents had that much faith in me before, so I want to be that someone for someone else.”

Jenner, who graduated in 2015 from Lehigh Senior High School, has spent her final semester at FSW doing student-teaching in a second-grade class at River Hall Elementary School in Alva.


Wherever she lands, her focus is on helping kids grow academically while spreading the message of inclusion, acceptance and that differences make people stronger.

She hopes her story will help inspire others to not give up on their dreams.

“You can achieve whatever you wish, you just have to keep working toward it,” she said. “Stay determined no matter what.”

Jenner will spell out that sentiment on her mortar board cap at graduation.

The design features puzzle pieces — the symbol often associated with autism — and the words: “Think I couldn’t do it? Think again.” 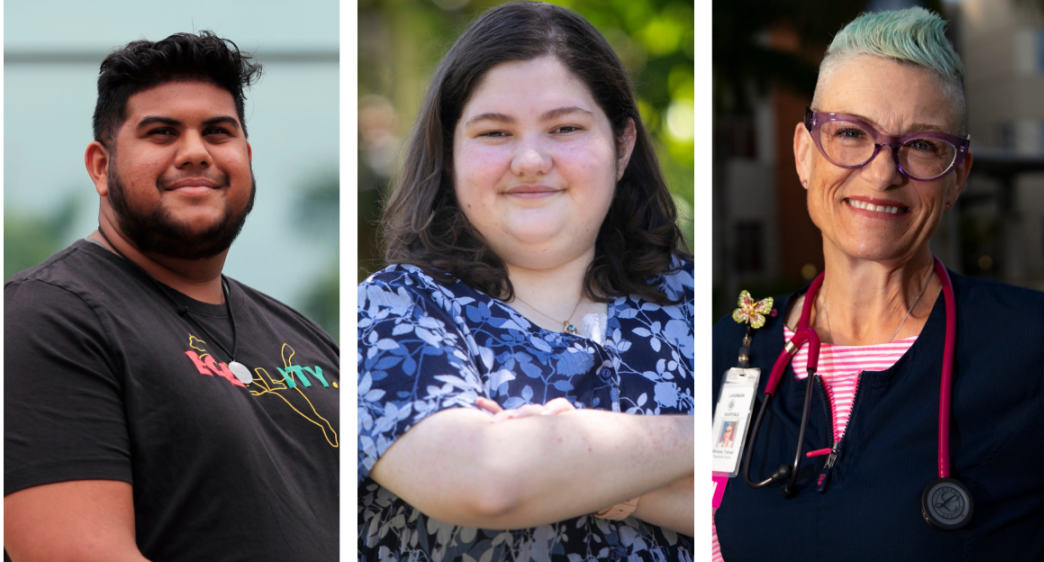